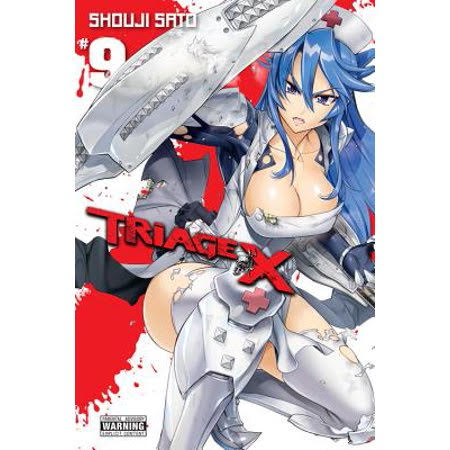 Triage X is a manga published in Japan by Monthly Dragon Age, and translated into English for sale in Anglophone markets by Yen Press. It has been published since 2009, and it seems that it will conclude in 2019.

The art will tell you that the title is clearly orientated towards the male shonen market. Triage X is concerned with a cadre of vigilante assassins called “Black Label”, headquartered in the fictional Mochizuki General Hospital. The assassins consist of hospital staff students from nearby Mochizuki High School. Together, as a parallel to the work of the hospital, Black Label kill undesirable people, considered to be the “cancers” of society. The team consist of characters with their own murderous specialisations: swordplay, explosives, death by incineration, sniping expertise, machine gun expertise, and so on.

Writer and artist Shoji Sato has announced that the series will conclude with its twenty-first volume. The title is so far at its nineteenth volume. It has spawned an anime series (broadcast in 2015) and been commercially successful.