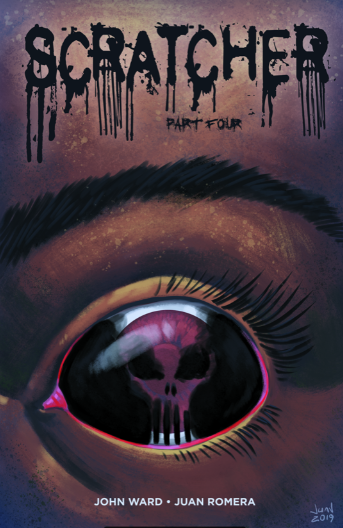 Writer John Ward was kind enough to send us an advance copy of Scratcher #4, and again we were very pleased to read it. We have previously reviewed the first three issues, and favourably – a click on this link will give you a rundown on the plot. For those who do not like following links, here is a summary:

Tattoos are often a life-altering change to a person’s physical appearance, sometimes but certainly not always symbolic of some event, self-perception, or devotion. In this title, the main character, Dee, is a tattoo artist. She is a forlorn figure, someone who would prefer to be a conventional artist but who was told in art school that she was innately sub-standard. Some people self-identify with their skills and talents, and it is clear that for Dee, this assessment by her teachers was crushing.

But something has gone wrong with one tattoo. One of her recent customers, a girl named Sarah, has started behaving and first strangely, and then extends into psychotic violence, tearing people to shreds. “It’s smothering me,” Sarah shrieks. “It wants to live. And it doesn’t care who it hurts.” Her own hand in a confrontation is pulverised, the bone “turned to liquid”. The tattoo has taken control of Sarah. She tries to kill herself by leaping off a bridge but is stun gunned and apprehended by the police. But at the police station, once she has recovered from the stun gun, she rips the policemen to pieces. Gutted carcasses that were once human line the corridor. Somehow, Sarah, underneath the malign control of the tattoo, prevents the same fate visiting Dee. And then, back to the bridge, where Sarah is finally successful in stopping her tattoo at the cost of her own life.

It evolves that the malevolent ink which is the vicious antagonist of the story has a history. It was an unhappy guest of an anonymous US government agency, where it is called “the anomaly”. This seems to have aggravated its purpose, it ruminates. Part of the menace which has entered into the final chapter of this title is that the ink now has a coherent and intelligent voice. As noted in our review https://www.worldcomicbookreview.com/index.php/2019/07/12/kill-six-billions-demons-volume-1-review/ of Kill 6 Billion Demons, there is nothing so sinister as a conversation with the darkness. It is as if Mr Ward has been tuning an old radio, and what was menacing static is now a clear and vicious whisper.  “You’re finally here,” the ink rasps. ” You have no idea how happy this makes us.”

Artist Juan Romera keeps pace, dealing well with the burden of a villain which is, essentially, a malevolent blob of ink. Mr Romera’s skill in depicting brutally graphic gore leave no one in doubt as to the genre of the comic.

This final chapter draws heavily upon Christian symbolism. The lead character, Dee, is betrayed by an ally in the finest tradition of Judas, and is then suspended in chains in a faux crucifixion and tortured with a cattle prod, akin to the spear which punctured the body of Christ. We then move onto the Book of Revelations. In the final battle, a missile destroys the ship which is the stage for the action. The priest, Jerry, uses the sacrifice of to perpetuate his faith. Only in the last moment do we see that is in a garden paradise, giving up tattooing in favour of painting – a rebirth into a type of afterlife, far away. There are no cliches to any of this: an apocalyptic battle with a demon seems to be an appropriate way to concluding the story. Invoking the Book of Revelations in a text has been used by horror and science fiction writers ranging from Stephen King to Dan Simmons.

Scratcher has been creative, enjoyable, and thoroughly sinister. Our only complaint is that it is now concluded. We have enjoyed this title and look forward to Mr Ward’s and Mr Romera’s future work.