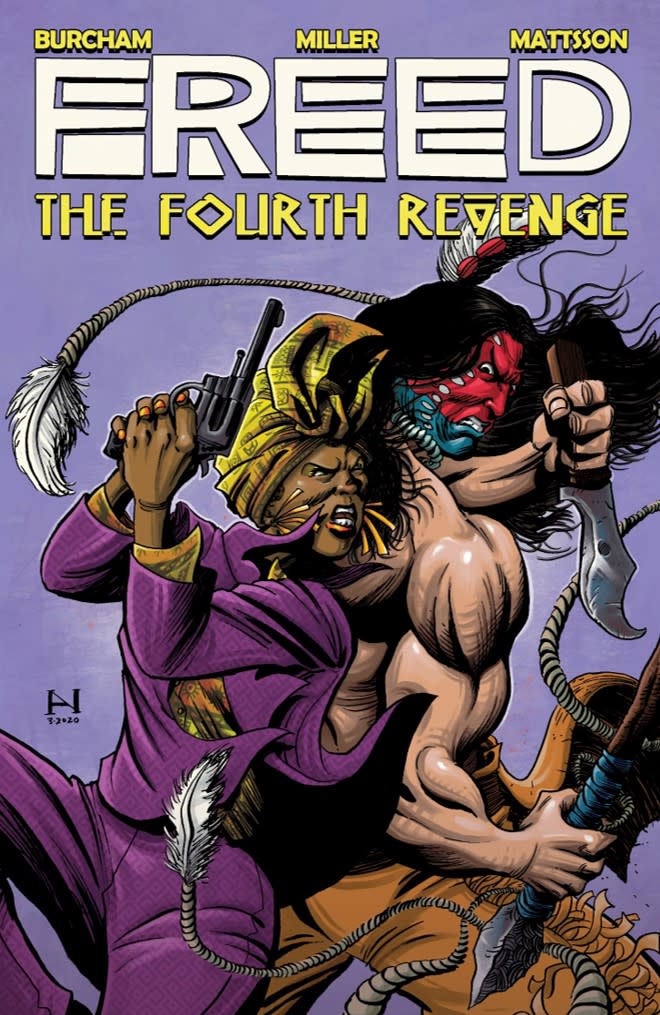 This is a crime story, independently published, written by Carl Burcham and with art by  Ian J. Miller.  The title has a decidedly blockbuster motion picture feel to it. Here is the promotional copy:

FREED #1: The Fourth Revenge is an action-packed, page-turning thriller for comic fans who love comic books like Punisher, Watchmen and V and action heroes and heroines like Jessica Jones and John Wick…. After a vision quest, a modern Sioux warrior seeks to avenge his ancestors by going on a killing spree throughout America. Georgetown law grad turned DC Detective Kioni Freed is called by her friend President Elizabeth McQueen to stop “the Avenger.” With the help of a grizzled former Bureau of Indian Affairs cop, Kioni pursues the Avenger to South Dakota, Los Angeles, Maryland, DC and New York City trying to stop the carnage. But the Avenger is staying one step and one murder ahead of her. Can Kioni stop the murders before the Avenger completes his fourth, final revenge?

Detective Freed is out to crack a case of serial premeditated murder. Freed has a powerful friend. The President of the United States, Liz McQueen, is a pal from colleague. Freed finds herself trying to outplay an entirely too formidable antagonist called the Avenger, as he symbolically kills three people in revenge for oppression of the Sioux Native American people. The murder spree is motivated by a desire to remedy historical injustices perpetrated against the Sioux . It should be no surprise that the “fourth revenge” (the title of this comic) is the President, transforming the plot beyond a mere resolution of a crime and instead into a desperate pursuit to save an old friend.

Mr Burcham writes Freed as an entirely believable character: altruistic, astute, and world-weary – an action hero, but one which happily breaks the mould by being both female and black. The inevitable involvement of the FBI are, inevitably, unwelcome: agents of the FBI have been depicted as annoying interlopers at least since the first Die Hard motion picture. The depiction of the Sioux on their reservation, disenfranchised and lost, is bleakly realistic. (Mr Miller’s art is excellent, particularly when it comes to capturing the weariness of the reservation.) Most notable of all is the personal sympathy of Freed towards the Avenger’s cause. Because Freed is black and from a very tough background, the historical injustices towards blacks in the United States give her a philosophical common cause with the Avenger. Freed must balance her empathy for the Sioux with her obligations as a police officer. It is not new, true, but it is nonetheless highly engaging.

Some spoilers follow. Our only substantive negative criticism is with the conclusion to the plot. It would in our view have been more intriguing if the Avenger successfully killed Liz McQueen (as a fictional president, so no reader would be offended) and had lived to see his handiwork. There would have been much more pathos if the Avenger had fulfilled his mission: Freed would have failed to save her friend, the Avenger’s empty revenge (as opposed to actual justice) would have been achieved at a pointless cost, the snooty FBI agents would have shared in the blame, and, with all of that vengeance having been enacted, nothing would have changed at the reservation so the Avenger’s mission achieved the hollowest of victories. There might have been an echo of Warren Ellis’ Black Summer: a brutal assassination as an exclamation mark to the inequity which is the spotlight of the story. Instead, we have a “good policing” conclusion.

We put this to Mr Burcham before publishing this review, and this was his response:

I thought having [the Avenger] die for his cause would be more impactful. I wasn’t trying to burnish Kioni (as a cop) as a big hero; I really was just trying to show how she and [the Avenger] shared somewhat similar backgrounds as African Americans and Native Americans. (It’s why we are including the free poster Broken Promises, Shattered Dreams as a perk). The fact that even though she is a cop and believes in justice–is that so different from what [the Avenger] wanted too as a Native American? He just conflated justice with revenge. I also wanted some finality to [the Avenger’s] story, to make him somewhat of a fallen hero for at least trying to avenge his ancestors for the wrongs committed against them. And by bringing in Ben, I wanted to show that he was of Teddy’s reality and heritage too but he just didn’t take the same path for making it right. He took a different path, one where he drinks his sadness and helplessness away. As for Liz, she will be teaming up with Kioni in two more books so I needed them to stay together.

Fair enough. We enjoyed this thoughtful but action-packed comic and look forward to following Freed’s future high octane adventures.  More information about FREED #1: The Fourth Revenge is available on the comic’s website https://www.freedcomic.com/ , and which includes a link to a Comixology sales page.