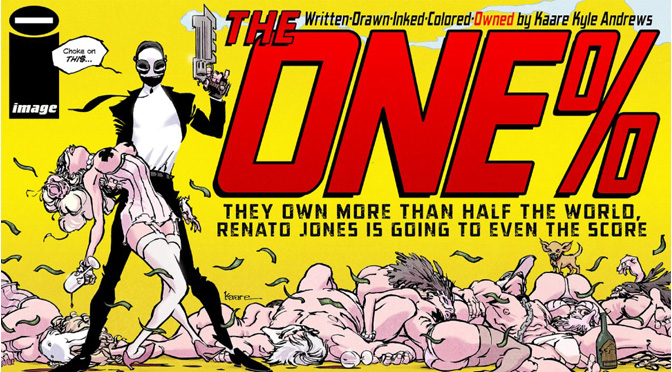 This is yet another remarkable title from Image Comics, the innovators in American comic books.

The concept of billionaire vigilantes seeking to avenge their parents’ death is well-known in the superhero genre. Yet never has the concept been stripped to such a granular level and imbued with a sense of angry class warfare. If indeed this is some distillation of the Batman formula, it is barely recognisable as such.

Mr Andrews begins his attack on the concept of servants and masters with the front cover. “Created, Written, Drawn, Colored And Owned By Kaare Kyle Andrews”‘ reads the byline, with the word “owned” emphasised in red text. Mr Andrews wishes readers to know that his creative efforts on the title automatically vest in the publisher, and that he is not a hired man servicing a character property. There is a sense, intentional or otherwise, that to buy the book is to directly support the creator.

The quality of this book means that such a purchase will not be made exclusively for that purpose. The very first page of the first issue sets the backdrop: that Renato Jones has come into his inherited estate and that wealth brings with it the company of people such as the amusing, sexy and divinely beautiful Bliss, who gives Renato Jones a quick lesson in dealing with birthday candles: “Put your lips together.. and blow,” she says, as the panel zooms in towards her full mouth set against the night sky. (By issue #2 Bliss is revealed as a childhood friend rather than a sex object.)

But the implicit promise of sex with an angelic beauty is starkly juxtaposed with the next few pages, in what must be one of the most brutal sequences in a comic book in recent years. It begins with a double-page monochrome spread with the silhouette of a very young boy clutching a bear, looking towards an ajar door. Then on the next page the door lights up with the flash of a shotgun, the killer’s face in a rictus of violent pleasure, a shell spilling into the air, and the boy’s mother screaming as she crawls towards her son. The effect of the page being devoid of sound effects or dialogue is that it is thoroughly nightmarish. Within five pages, the temptation of heavenly sexual delights crashes downwards to the experience of brutal terror.

The most intriguing aspect of the story is that Renato Jones is not Renato Jones. Caught as a street kid in Jakarta, an orphaned Westerner escapes execution by corrupt Indonesian policemen by pointing to a missing child poster on a wall and identifying himself as the missing boy. From there, the policemen deliver the child to Church, the butler and protector of the Jones family. Church collects the boy in a private jet. The boy, on the face of it,
has been the beneficiary of an enormous windfall.

But waiting for him at home is Grandma Jones and her shotgun. The boy is saved by quick wits and the intervention of Church. Church reveals that he knows the boy is not Renato, and charges him to make good. This, in combination with his Indonesian surrogate mother’s dying words that he should be a good boy, appear to propel the boy towards a future as a masked man called “The Freelancer” who preys upon the corrupt super-rich.

It is heady and subversive. Interspersed within the story are mock advertisements, consisting of models promoting luxury goods and lifestyles. These are brilliantly crafted and they are clearly intended to be both laconic and jarring, a contrast to the anti-capitalist text. Aspiring to the lifestyles of the rich and famous is facile, the comic seems to say: in the adjacent pages are the real issues of abuse of workers and the obscenities of the idle rich.

Only twice does Mr Andrew slip up:

a. In order to make the fight in the first issue between his target and the Freelancer more even and more visually exciting, the wealthy billionaire who the Freelancer is about to execute uses technology to transform into a harpoon-wielding monstrosity. This seems to be an inclusion to appeal to readers who like superheroes. It is unnecessary;

b. The assassin hired to kill the Freelancer in issue 3 is called “Wicked Awesome”. This response from the establishment is reminiscent of Mark Millar’s anti-establishment work in “The Authority” (Wildstorm Comics, 2000) where a team of superheroes openly defy governments and their protection of multinational corporations, and are ambushed and thoroughly defeated by a government-created, super-power laden character called Seth. In “The Authority”, Seth is indulgent and perverted, like Wicked Awesome, but does not come across as silly. Wicked Awesome is instead a feeble inclusion into the story.

Aside from that single flaw, this is an entertaining and visually exciting read. Mr Andrews could benefit from editorial guidance and the only downside to this title, on analysis, is that Mr Andrews, apparently sans editorial restraint, occasionally crosses from dry wit and righteous anger to childishness. But nonetheless, it is an excellent comic.