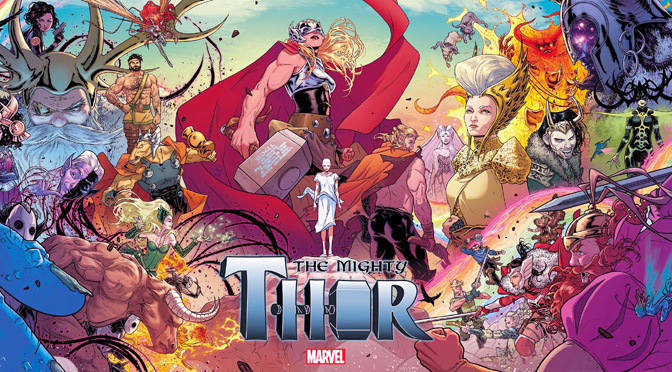 In this democratic age we covet privilege but we do not necessarily respect it. Marvel Comics’ character Thor is a prince, born into power and glory, his inheritance granting him title “God of Thunder” and everything that goes with that.

One of the very few treatments of the god Thor by rival publisher DC Comics was in 1991, in the pages of the epic comic Sandman, written by Neil Gaiman. Mr Gaiman paints Thor as an over-sexed buffoon, effortlessly manipulated by his trickster brother Loki. Thor is ill-mannered and at one point utterly drunk. Thor’s hammer is more than merely a phallic symbol in this story: it is not just figuratively a hammerhead penis, sometimes big and sometimes small. To underscore the point Thor’s wife Sif is described as having a birthmark in the shape of an anvil on the inside of her thigh.

The symbology of giving Thor’s hammer and the tremendous masculine power it embodies to a woman is a feminist masterstroke. Near the beginning of this story, Mr Aaron has the new female Thor rescue a hulled space station singlehandedly using sheer grit and strength, while the cream of Marvel’s superhero pantheon wring their hands in uncertainty and stand to the side. These men are so ancillary to her achievement that she barely notices or acknowledges any of them.

Thor is a woman who has reharnessed the supreme power of a male god’s mighty tool. It is as potent a feminist statement as the businesswoman who wears a tie to the office.

The feminist underpinning also works on another level. The original Thor himself is unworthy and in exile, and is replaced in the role of Goddess of Thunder by former female love interest Jane Foster. Foster is a character created in 1962 written by creator Stan Lee as a nurse and assistant to Thor’s alter ego. Foster was an ancillary character in the mythos, a human woman to be desired by the male lead, in a very dated 1950s/1960s romance-driven subplot. Mr Aaron has turned this on its head. The male lead character is now the footnote, and the former object of desire is now the lead.

But the brilliance of this comic is that Foster herself is worthy in a way that the original male Thor could never be. The original character was an all-powerful benevolent enforcer, fighting monsters and other threats because that is what he was born to do. Foster’s assumption of the role of Thor instead comes at an horrific cost. Foster is fighting metastatised breast cancer. The first two pages of the issue are devoted to exploring the pain and suffering involved in chemotherapy. It is a crushing thing to contemplate, not sparing the reader any of the agony of the process. And then, an emergency: Foster must call upon the power of Thor to save lives. In doing so, the magic of her powers expels the poison of the chemotherapy and her treatment is undone. The suffering of the chemotherapy has been for nothing.

Foster is shown to be worthy through merit. She was not born a prince. She chooses to sacrifice a piece of her life and her ability to recover from cancer with every act of heroism.

It is both brutal and noble. It is a thunderbolt of fictional writing in this genre. Mr Aaron has through this masterful plot entirely demonstrated that he is, like his character, very worthy indeed. One wonders where this will lead to: if the original male lead returns, which given the popularity of the character seems very likely, then will that be because Jane Foster has finally succumbed to her disease? If so then that would place her at the very peak of all fictional heroism, of any gender.