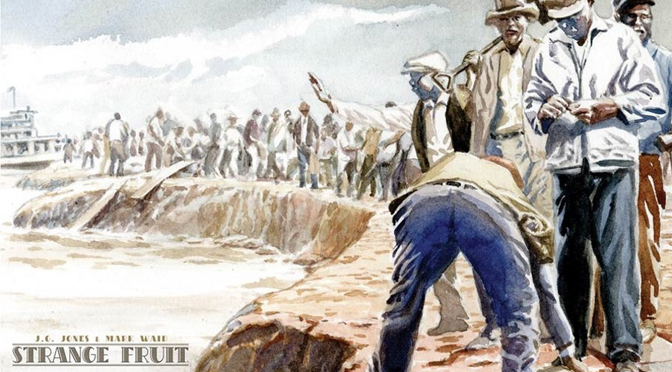 Set in the town of Chatterlee, Mississippi in 1927, this comic by JG Jones and Mark Waid reworks the Superman mythos: what if Superman was black and landed in the racist South in the 1920s?

The first two pages consist of dialogue between a group of white men, armed with axe handles, about to enter a “coloured café” so as to coerce black workers to help with a flood-stricken levee. One of the gang tells his son to keep away from the café, with the words, “This ain’t no place I ever want to see you in.” It is quite deliberately not clear whether the man does not want his son to be in a place where black people socialise, or whether he does not want his son to witness blood-letting.

On every page, violence and tension are like sharks frothing the ocean’s surface. Confrontation exists between even the members of the white posse sent into the café, with one man pulling a gun and threatening a lynching, and others in the group wrestling the gunman away from an alleged thief. A few pages on, we see Klansmen, dressing themselves in their white uniforms, confronting a local senator in a house where the alleged thief, Sonny, is hiding. Sonny runs out of the back door of the house, and soon he is chased by dogs and Klansmen. Only the appearance of a giant alien, nude and incredibly strong, saves Sonny from almost certain murder. And at the end of the first issue, Sonny instructs the giant to wrap the Confederate flag around its loins (regarded with horror by one of the sheriff’s deputies in the second issue – “Disrespectful cuss crappin’ on the flag like that.”)

The second issue further pressurises the story. Sonny is now in jail – the manner of his incarceration jars the plot somewhat and happens off panel. The alien, led by the authorities out of the whites-only library while reading a book on advanced mathematics, joins him in jail. After insulting the sheriff, Sonny is beaten by deputies and appeals to the alien giant for help. The giant uses his brute strength to break out of jail and leads a group of black men out of town, the Klan in pursuit.

It is compelling writing. The overarching fantasy element, the weird spaceship and its mute superhuman pilot, could just as easily have been left out of this captivating story.

The plot is good, but the characterisation is excellent. The characters are painted as complex individuals:

a. Sheriff Earhart derides the Klansmen as cowards, but in the meantime has ordered his deputies “to beat me some answers outa that nigger” in respect of information relating to a missing boy. Yet when Sonny and the giant break out of jail, the sheriff stands down and refuses to chase them.

b. The hatred of the Klansmen by a wealthy widow toting a rifle, Sarah Lantry, is palpable in her silence – she wishes only to kill them and her rage is inflamed by the suggestion that her visitor, the local senator, is there at night inappropriately.

c. The senator refers to the Klansmen to their faces as “ignorant assholes” and is prepared to shoot out their right to enter the Lantry house. Yet he spends his time in the second issue of the comic seeking to be quoted in the local newspaper, apparently to garner publicity for himself.

d. Mr McCoy, a black engineer sent from Washington to help stem the levee flood, is entirely dedicated to looking for solutions to the point of ruthlessness. He is more or less blind to the overt racism about him in his single-mindedness; he is prepared to sacrifice Sarah Lantry’s estate to the flood; and he sees the alien giant solely as the answer to the problem of the flood.

e. Sonny is a would-be strike organiser and leader of men, but is arrested while blind drunk and with no memory of the event when he wakes in a cell.

This is all done with a skilful minimal palette of dialogue, no doubt the efforts of the veteran writer Mr Waid.

Another critic J.A. Micheline, writing for the website “Women Write About Comics” does not share this reviewer’s appreciation of “Strange Fruit”. Ms Micheline notes that:

““Strange Fruit” is the title of a song protesting American racism and, particularly, the lynching of blacks, and was made famous by black singer Billie Holiday in 1939. The lyrics to the song are haunting and speak of this strange fruit — that is, black bodies — that swing in the southern breeze.”

Ms Micheline is vehement in her condemnation of the content of this work, with many of her comments typified in this statement:

Both Mr Jones and Mr Waid are white males. Boom! Studio’s editor-in-chief Matt Gagnon noted in a promotional comment that “Strange Fruit” is a “deeply personal passion project”. The story depicts Mississippi in 1927 as a profoundly racist place where the Ku Klux Klan hold reign and there is a palpably sinister entrenchment of superiority by white people over black people. The story is manifestly sympathetic to the oppressed black characters who are beaten, jailed and threatened with lynching, and otherwise intimidated with the threat of violence into unpaid manual labour.

Ms Micheline’s criticism echoes the widely-reported comments of Lee Daniels, the creator and writer of television show “Empire”, in July 2015 during an interview with “The Hollywood Reporter”:

“I don’t know what gives me more pleasure: watching my story unfold or going in and watching a roomful of black people talking for me…. Black people hate white people writing for black people. It’s so offensive.”

…reactions to works like [white writer] Kathryn Stockett’s The Help, the novel-turned-blockbuster film about African-American maids working in Mississippi in the 1960s.

“Despite efforts to market the book and the film as a progressive story of triumph over racial injustice, The Help distorts, ignores and trivializes the experiences of black domestic workers,” the Association of Black Women Historians said in a scathing statement in response to the film, adding that it “makes light of black women’s fears and vulnerabilities turning them into moments of comic relief.”

But to do so fairly it is necessary to rebut some of what Ms Micheline has to say.

There appear to be four basis for her objections:

This is incorrect. It is true that the victims feel the pain most acutely. But those who sympathize also feel pain as part of the human condition. A person does not need to be Jewish to understand and express the pain of the Holocaust. In the context of “Strange Fruit”, human empathy is a natural motivator to write this text.

2. That as white men, Messrs Jones and Waid have no inherent right to be exploring (through a work of fiction) black history.

But black history in America cannot be the exclusive province of black people. Compartmentalising history to exploration by people of one ethnicity is Orwellian. Access to black history in America, even by a work of fiction, is self-evidently helpful to understanding black history. For those readers with no exposure to what it was like to be a black person living in Mississippi in 1927, this comic might be the first insight into that experience. The ethnicity of Messrs Jones and Waid in opening that door, revealing that insight, is irrelevant.

This is plainly wrong. A critique of dialect as a vehicle for dialogue is open to anyone, and particularly to those people who are familiar with the dialect. A writer can botch the dialogue of a character of a particular ethnicity, in circumstances where the expression of dialogue is determined by ethnicity. If that happens then the writer should be called to account by critics for a lack of understanding or poor research (Michael Chabon, for example, was gently needled by critics for trying to be “too street” in the novel “Telegraph Avenue” (2012)). Some of America’s greatest writers, and who happen to be white, have written from the perspective of black people. Herman Melville, Mark Twain, William Faulkner, and Harper Lee have all written texts, and in some cases monumental classics, putting words and motivations into the mouths and brains of black characters. If Ms Micheline’s proposition was correct, then Mr Melville’s monologue in “Moby Dick” for Fleece, the cook on the Pequod, where the character says, “”I’m bressed if he ain’t more of shark dan Massa Shark hisself” would be an improper or offensive expression of dialect used by black sailors in the 1840s, simply because Mr Melville was white.

In her review, Ms Micheline braces herself for ad hominem attack of herself and her review because of her own ethnicity (“Now that I’ve got that out of the way and people can either rage quit or tweet about my obvious bias in regards to this comic and their creators – Super looking forward to a white person calling me racist, by the way. First person who sees it, screencap and send pics”). But each of the arguments she espouses, distilled and set out above, are ad hominem of themselves: “Strange Fruit” is attacked of its own existence, because the writers are white. This approach is both unreasonable and irrational.

4. That the subject matter of black oppression in America is diminished or trivialised by the work. This is done through the vehicle of the title – a reference to the people hanged because of their race as the title of comic book entertainment about a black Superman who crashes to earth in Mississippi in 1929.

Of all of Ms Micheline’s arguments, this is the most compelling. A haunting and highly emotive allusion to the graphic and shocking murders of African-Americans in this context is insensitive. With two issues to go to complete the series, Messrs Jones and Waid have some time to expand on why they chose such an emotionally-laden title for their work. There would want to be a very good reason for this, failing which the title choice is inexcusable.

But overall, Ms Micheline’s review is an exclusionary and ill-thought through assessment. “Strange Fruit” should be properly regarded on its merits, and it, overall, is a merit-worthy text.