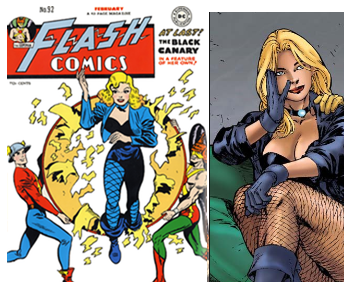 But the other female hero with staying power, Black Canary, in 2017 celebrates her seventieth birthday. This character also has a significance in feminist perspectives on American superhero comics, and has had a vast trajectory, from strong female lead, to the nadir of tortured plaything, and more recently, the zenith of being a leader and world-class fighter.

The character first appeared in Flash Comics #86, published in August 1947, created by the writer-artist team of Robert Kanigher and Carmine Infantino. Mr Infantino in an interview described the process of creation of the character:

“When Kanigher gave me the script, I said, ‘How do you want me to draw her?’ He said, ‘What’s your fantasy of a good-looking girl? That’s what I want.’ Isn’t that a great line? So that’s what I did. I made her strong in character and sexy in form.”

Outside of her costume, Black Canary was a dark-haired florist named Dinah Drake. Protecting her secret identity consisted only of donning a blonde wig. In the very first story, Black Canary’s motives were initially uncertain, and with fishnet stockings, looked like a “bad girl” – a female superhero should be more demure. Only by the conclusion of the issue is it revealed that the character is not a villain.

Black Canary was introduced as a replacement in the title for a lacklustre, blundering hero from the 1940s, Johnny Thunder. A book by Les Daniels entitled “The Also-Rans: Trapped in the Back of the Book. DC Comics: Sixty Years of the World’s Favorite Comic Book Heroes” (1995, Bulfinch Press p. 86) notes “[Carmine] Infantino and writer Robert Kanigher were evidently tired of Johnny Thunder’s comical antics and eager to promote the Black Canary, who in February 1948 bumped Johnny from both Flash Comics and the Justice Society [of America] stories in All Star Comics.” (The Justice Society of America were a superhero team with origins in the 1940s, by which the publisher could combine all of its popular characters within a single title.)

“In a sign of the character’s growing popularity, Black Canary made her first appearance outside of Flash Comics in a feature by writer Robert Kanigher and artist Alex Toth… By the story’s end, Black Canary was considered for JSA [Justice Society of America] membership but wouldn’t officially join until All Star Comics #41.”

The character later joined another superhero team, the Justice League, after her detective husband, Larry Lance, was killed by a villain called Aquarius. This was in an adventure involving both the Justice League of America and the Justice Society of America. (During the 1980s, the character underwent a bizarre recasting of origin, involving a mystical dimension, learning that she was the daughter of what was redefined as an original, 1950s Black Canary, and the somewhat-creepy discovery that she had within her head the memories of her mother indistinguishable from her own. ) 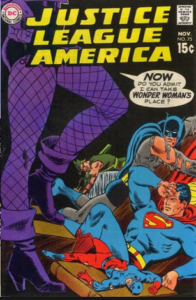 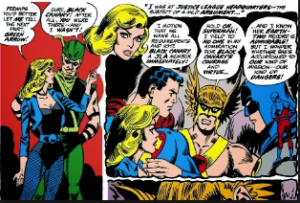 “…the creative team (Gardner Fox and Murphy Anderson] showed Black Canary to be nearly as capable as her male counterpart, Starman: Starman had to snap Black Canary out of a hypnotic spell placed on her by a villain in issue #61, but the heroine saves the hero from an ambush… in issue #26. Also in issue 62, Fox and Anderson has Black Canary subdue a rampaging gorilla using her hand-to-hand combat skills, suggesting she is a master martial artist…. Black Canary is inducted into the Justice League of America during the 1969 American-centric second wave of feminism. In the story arc in which they have the Black Canary leave the Justice Society for the Justice League, O’Neil, Dillin and Schwartz also kill off Larry Lance. In doing so, they severed Black Canary’s ties with the earlier stories present in The Brave and the Bold stories, allowing the heroine to come out of “semi-retirement” and return to the public sphere activity of being crime-fighter, unimpeded by the domestic responsibility of being a wife. Along with liberating Black Canary from her marriage, O’Neil and Dillin also enhance the power of the heroine.”

That was the Golden Age version – the equal to a male hero, and physically challenging. But in the Silver Age:

O’Neil and the writers who followed changed Black Canary from a heroine who displayed the traits of calmness, intuitive thinking, and decisiveness as she did in the Golden Age to a stereotypically feminine character whose emotions often got the better of her. 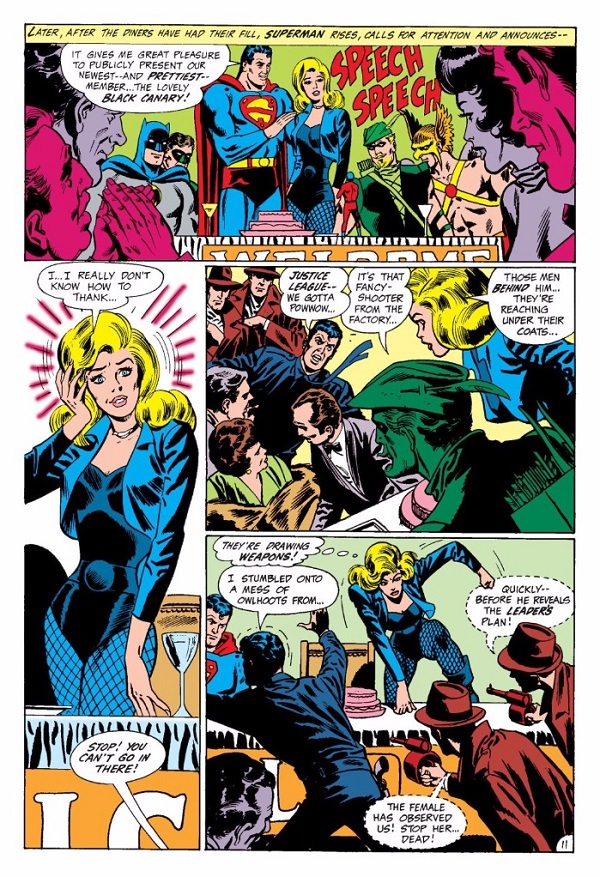 She is described as letting her mind wander during important meetings in Justice League of America #75, and revealing her sadness over the death of her husband to a stranger in issue 89 (1970). It evolves that the stranger is an antagonist, and she puts her Justice League team-mates at risk in sharing her feelings. As Mr Donaldson notes:

“In essence, by sitting down with the stranger and sharing her pain, rather than supressing her emotions as an heroic man would, Black Canary puts herself and her Justice League teammates in danger.”

An almost identical situation occurs between Black Canary and a charismatic adversary in Green Lantern/Green Arrow #78, in which the weak-willed Black Canary becomes a brainwashed pawn. 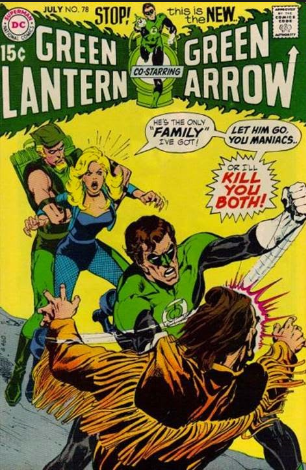 By May 1970, Black Canary is in a love triangle with Batman and Green Arrow (Justice League of America #79, #84, and concluding in issue 88). Mr Donaldson is scathing. “In doing so, they replicate another convention common to the domestic containment heroine archetype, the romantic heroine in need of a paramour.”

Green Arrow soon becomes Black Canary’s partner, in a rocky relationship in which Black Canary is the junior partner to the outspoken and politically left Green Arrow. By Adventure Comics #418 and 419 ((April and May 1972), Black Canary suddenly develops a new domestic skill – sewing, and is depicted sewing a new costume for Red Tornado.

Things only get worse for the character in the Bronze Age (1970-1985) of American comics. As noted in this article, in a controversial 1987 title called Green Arrow: The Longbow Hunters, Black Canary is captured, strung up, tortured and sexually assaulted before being rescued by Green Arrow. 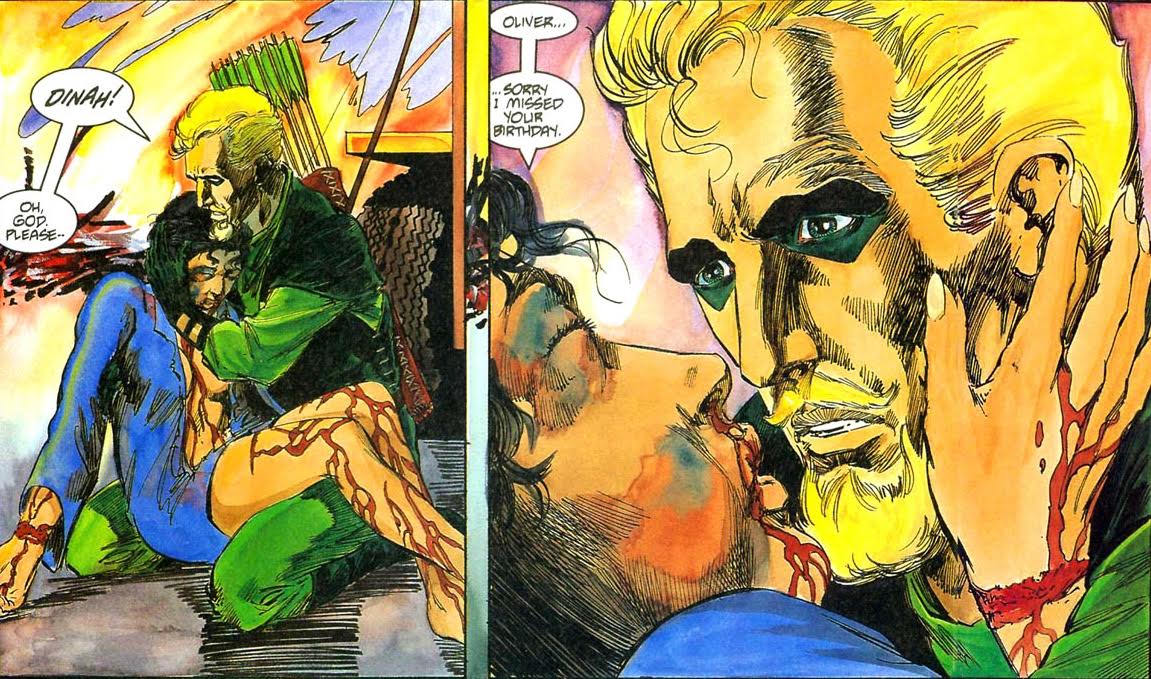 As a result, the character can no longer bear children and loses her superpower. From a feminist perspective, the reduction of a powerful female character is manifest: Black Canary is stripped of both the power to defeat men (the sonic canary cry) and female reproductive power, by a male writer (Mike Grell).

In 1996, treatment of the character radically changed. Editor Jordan Gorfinkel put the character together with Oracle in a title called Birds of Prey. 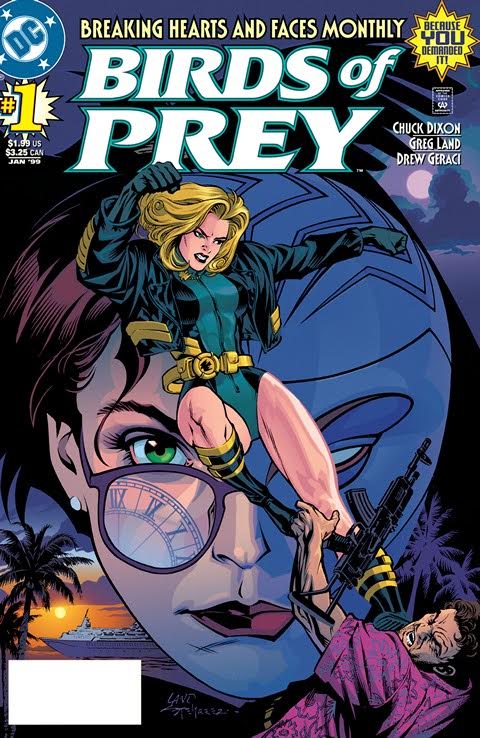 Oracle (formerly Batgirl) had been similarly abused: shot by Batman’s arch-nemesis the Joker, possibly sexually assaulted (the comic, The Killing Joke by Alan Moore, is unclear), and confined to a wheelchair.

Birds of Prey became a commercial success. The title featured superhero adventures, but quietly chronicled the character’s recovery from abuse and into a formidable player in DC Comics’ universe of superheroes: a respected, capable, and very female leader. The fishnet stockings were replaced by a Kevlar bodysuit. 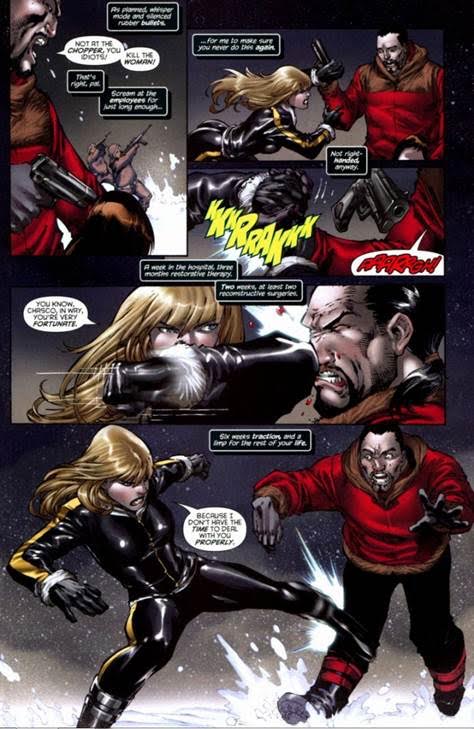 By 2003, writer Gail Simone had taken over the reins of Birds of Prey. Black Canary becomes the team’s field commander, and is regarded as one of the best martial artists on the planet.

The relationship with Green Arrow shifts as a consequence. Importantly, she becomes better than Green Arrow: she can defeat him, with ease. 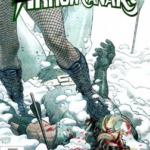 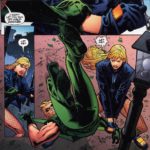 By 2006, writer Brad Meltzer introduces Black Canary as the leader of the Justice League, a significant and poetic rebuke to the character’s treatment in the 1970s and 1980s. 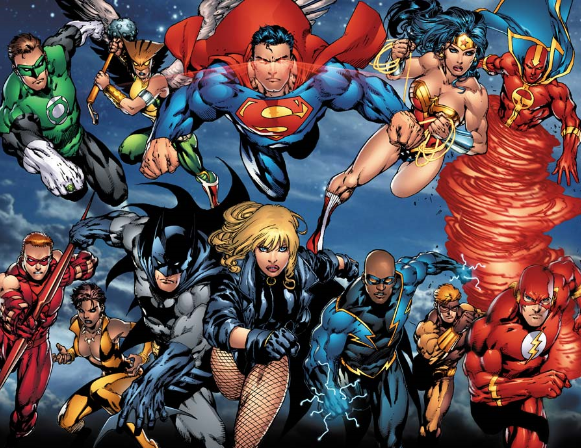 In Justice League #21, Black Canary learns that Batman, Superman and Wonder Woman had been secretly meeting and undermining her leadership. She uses sarcasm to bring the three most prominent characters in DC Comics’ continuity, including the formidable Batman, to heel. 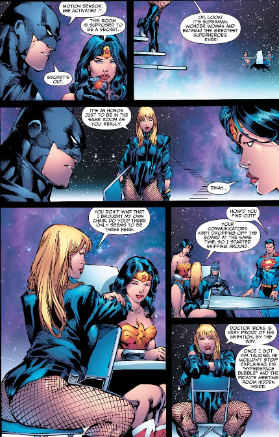 In 2011, the character briefly leads a team of anti-heroes, and in 2015, is recast as the lead singer in a band. By 2017, Black Canary is a main character in three titles – Batgirl and the Birds of Prey, Justice League of America, and Green Arrow. In Injustice II (April 2017), Australian writer Tom Taylor completes the circle by having Black Canary take on a male role in her romantic relationship, taking a knee and proposing to Green Arrow. 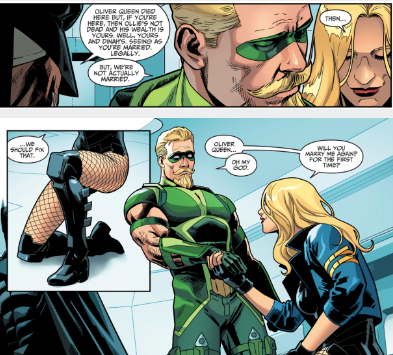 The fishnets have been reintroduced, and the character is unabashedly attractive and sexual. But nowadays Black Canary is treated by DC Comics’ writers and editors with cautious respect. Happy 70th birthday, Black Canary.

[Edit: With thanks to Anthony Daccardo for demonstrating that our arithmetic is not especially good. This article was originally published incorrectly noting Black Canary’s sixtieth birthday. Sorry.]