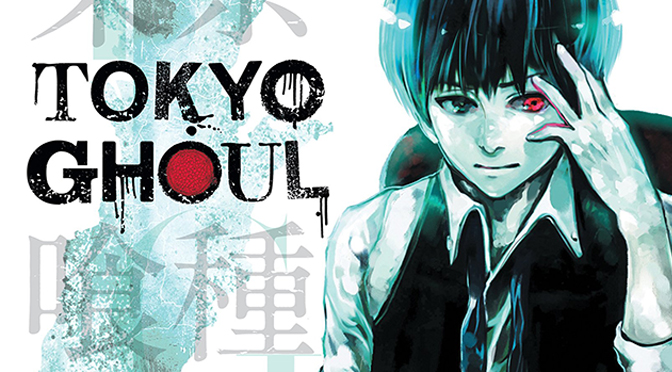 “Kodokushi” is the Japanese word for “lonely death”: a common enough phenomenon in Japan where haunting alienation from the community is prevalent as a consequence of, amongst other things, Japan’s extended economic stagnation. Many Japanese people, particularly unemployed and middle-aged men, die alone and unnoticed, and it is such an issue that Tokyo’s Shinjuku ward began a lonely-death awareness campaign.

Mr Ishida’s anime comic is concerned not with elderly men dying a lonely death, but with a young, awkward student named Ken Kaneki. Ken attends the imaginary Kamii University, located in Nerima ward in Tokyo. He is hopeless with girls, and hides in the shadow of his good childhood friend, the extroverted Hide. A pretty young woman named Rize slowly becomes interested in Ken, as a consequence of a mutual interest in a sinister book entitled “Egg of the Black Goat”. The two end up walking together down an alley. Rize leans in, apparently nervous, and then abruptly transforms into a ghoul and takes an enormous bite out of Ken’s shoulder and neck. The alley is otherwise empty: Ken’s version of kodokushi will be more horrific than most, but yet not an unexpected thing in Tokyo.

This Tokyo is suffering from a terrible ghoul pandemic. Ghoul attacks are accepted as commonplace but somehow manageable, like Shinjuku ward’s attempts to tackle kodokushi, with experts espousing opinions on ghoul’s behaviours and life-cycles on TV, and idle and macabre gossip about the latest ghoul-related murders. Rize is a particularly powerful and unpleasant ghoul, and Ken has no hope of escape. As he flees, she laughs, enjoying the hunt: Ken is viciously disembowelled and faces certain death. And then, by chance, steel beams fall onto Rize and kill her. Ken is rescued – but Rize’s organs are implanted by surgeons into Ken in order to save him. And thus, Ken becomes an impossible and unique hybrid, half-human and half-ghoul.

The text repeatedly references Franz Kafka’s “The Metamorphosis” (1915), as Ken struggles to make sense of his transition from humankind to a creature which can only eat human flesh. The story is reminiscent too of Anne Rice’s novel “Interview with the Vampire” (1976), with the central character beset by self-repulsion over his transformation and eating requirements.

Yet the central theme, obscured behind the violence and horror, is about culture shock. Ken is clearly overwhelmed by his new life and new appetites. He finds himself surrounded by things once familiar and now strange: there are many more ghouls about him than he ever knew, and there is a hierarchy around and a philosophy held by ghouls. Coffee (a not-Japanese thing but an ever-present scent in modern Japan) has become a sinister indicia: his friends start to smell oddly delicious.

The story echoes both:

a. the problems Japanese people have living in or interacting with Western society. This is called “Paris Syndrome”:

“In Japanese popular culture Paris is associated with romantic films such as Amelie and is thought to be the stuff of fairytales, cobble-stoned streets and all. When the reality of the modern city of Paris sets in, with its notoriously rude service and confusing public transport, some tourists simply cannot cope with their expectations being dashed. Combined with exhaustion, language barriers, and culture barriers, homesickness and culture shock can cause serious psychological distress. The Japanese embassy in Paris repatriates up to 20 tourists a year, sending them home with a doctor or nurse to ensure they recover from the shock.”

As Ken finds himself drifting from his circle of human friends, he struggles with the absence of a collectivist community to being immersed in an individualist environment – each ghoul has their own hunting territory and will fight viciously to maintain it. The parallels to Western society are obliquely hidden in the text;

b. Japan’s own absorption of Western cultural values. From the 1890s to the 1920s, Japan struggled to understand the West and yet maintain its own self-identity. Post-war, this battle to balance the two was lost during occupation. It is no coincidence that the ghouls are the ultimate in consumerism.

What is on the face of it a horror tale of predatory feasts on humans and ghouls snarling and clawing each other with black shapeless talons, “Ghoul” is in reality a nuanced look at how people from different societies interact and integrate. This is both a fun and serious work, and it is little wonder that it is now in its third reprint – remarkably, all within three months of the date of its original English publication.