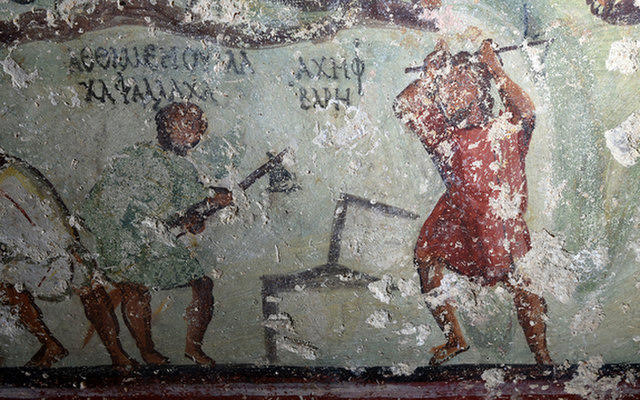 The medium we critique is often trivialised, and so we take smug delight whenever we come across evidence of the historical pedigree of comics.

Pictures on a tomb, with dialogue in adjacent speech balloons, have been unearthed in a tomb in Jordan. The tomb was discovered in 2016 in the town of Beyt Ras, which forms the site of the Roman city of Capitolias. It dates back to the 1st century AD. Images of some of the artwork on the tomb’s walls were recently revealed by the Department of Antiquities of Jordan.

There is not much detail as yet but we understand from a press release from France’s National Center for Scientific Research (CNRS) that dozens of inscriptions appear alongside the figures. These inscriptions describe the action in the local language of Aramaic (though written in Greek letters), and they seem to serve the same purpose as speech bubbles do in comics.

The captions that appear next to some of the figures give rise to the comparison to comics . “These 60 or so texts painted in black, some of which we have already deciphered, have the distinctive feature of being written in the local language of Aramaic, while using Greek letters,” researcher Jean-Baptiste Yon of the History and Sources of Ancient Worlds Laboratory (HiSoMA) in France, told CNRS. “This combination of the two primary idioms of the ancient Near East is extremely rare, and will help to better identify the structure and evolution of Aramaic. The inscriptions are actually similar to speech bubbles in comic books, because they describe the activities of the characters, who offer explanations of what they are doing (‘I am cutting (stone),’ ‘Alas for me! I am dead!’), which is also extraordinary.”

The CNRS press release, which contains much more information on the discovery of the tomb, can be found here.