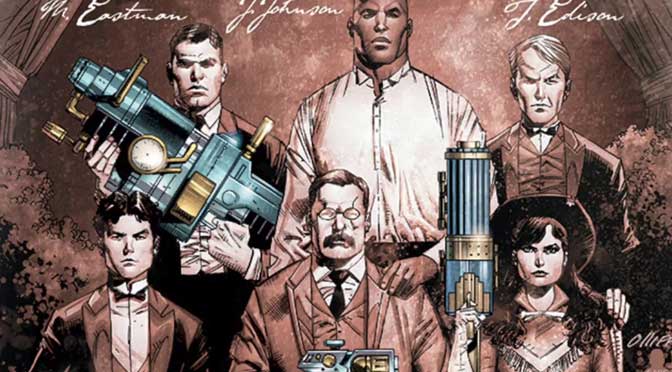 Theodore Roosevelt, the twenty-sixth president of the United States of America, was an eccentric but brilliant man. A naturalist, a rancher, a Governor of New York, an Amazon explorer, an Assistant Secretary to the Navy, a war hero, a humanist, and the creator of both the Panama Canal and the Teddy Bear, Roosevelt’s interests were manifestly far reaching. In this steampunk title, Roosevelt’s career is even further extended into nocturnal crime-fighting and paranormal investigations.

The year is 1898 and Roosevelt has just rescued a group of women, locked into a garment sweatshop, from a raging fire. Roosevelt, wearing crimson-lenses goggles, deploys a ray gun to destroy a nearby water tower in order to extinguish the blaze after his airship explodes. Thus we see the raw indicia of steampunk.

But we also see Roosevelt as first Batman and later Iron Man. Both of these are globally comic book characters owned by, respectively, DC Comics and Marvel Comics. Like these characters, Roosevelt is a rich eccentric who, enabled by advanced technology, saves people. When a woman falls to her death through the burned out floor, a guilt-wracked Roosevelt takes a show at an exclusive club, to wash the blood from injuries incurred in his adventure. The man’s back is covered in scars. In that regard we see the Batman mythos invoked. Later, on a battlefield in Cuba, Roosevelt wears grey mechanised iron armour outfitted with advanced weapons, very much resembling the earliest version of Iron Man. The writer, Adam Glass, paints his portrait of Roosevelt by plain reference to fictional characters perhaps better known to his contemporary readership. It is a blunt instrument but it works.

Roosevelt is sent to Cuba by a shadow cabal of very wealthy industrialists whose legacy still exists a hundred years later: JP Morgan, Vanderbilt and Rockefeller. The group have discovered that the sinking of the USS Maine, which (in truth, outside of the story) precipitated the Spanish-American War of 1898, was actually carried out by laser rather than by Spanish saboteurs. Roosevelt collects an elite and oddball team to assist him: Harry Houdini, the world-famous escape artist; Annie Oakley, a foul-mouthed circus performer who happens to be the world’s best shot; famous inventor Thomas Edison, who is also the group’s quartermaster; and Jack Johnson, future heavyweight champion boxer (and, as an unbeatable black fighter, inspired the racist term “the great white hope” – a series of ultimately failed white boxers who were entrusted with restoring white racial superiority in the boxing ring).

In that regard, Mr Glass borrows from writer Alan Moore’s title “League of Extraordinary Gentlemen”. In Mr Moore’s work, various characters from the fictions of Dracula, Dr Jekyll and Mr Hyde, HG Wells’ “The Invisible Man” and “The War of the Worlds”, Jules Verne’s “Twenty Thousand Leagues Under the Sea”, Arthur Conan Doyle’s “Sherlock Holmes”, and other early science fictions tales from the turn of the last century, are bound together in an extended story of violence and treachery amidst an alien invasion.

But instead of using fictional characters, Mr Glass modifies the lives of historical characters. And he blurs the lines between history in a time of adventure and his own story, in a way reminiscent of Roy Thomas’ work in “All-Star Squadron” in 1985 (Mr Thomas masterfully weaved the true history of World War Two into superhero stories.)

It is a commendable and intriguing idea, with these remarkable characters set at a time of the rise of American power and prestige. The interaction between the characters is entertaining – the Jewish Harry Houdini and the black Jack Johnson in particular are a fun pair, and Annie Oakley is positively amusing in her inappropriateness. The dialogue is a little stilted at times, even beyond the stuffiness to be expected in Roosevelt’s word balloons and Edison’s awkwardness.

But the thing which lets the story down is the plot. For, just like “League if Extraordinary Gentlemen”, this is also about an alien invasion, but effected by mind-controlling bugs along the lines of Robert Heinlein’s “The Puppet Masters” (1959) instead of giant tripods. Homage this drifts into a loss of the spark of novelty.

Mr Glass’ desire to include historical characters of the era also goes over the top when Grigori Rasputin arrives in Cuba, as an agent of Tsar Nicholas II. Rasputin, a monk and mystic, was notorious in the 1910s for his influence over the Russian imperial family. But in 1898, when this story was set, Rasputin had not taken up residence in the imperial capital of St Petersburg, let alone met the Tsar.

This is but volume one. Overall, given the novelty of the concept, we would not turn up our noses at volume two. But we hope for a better forged plot.

Death to the Tsar (Review)