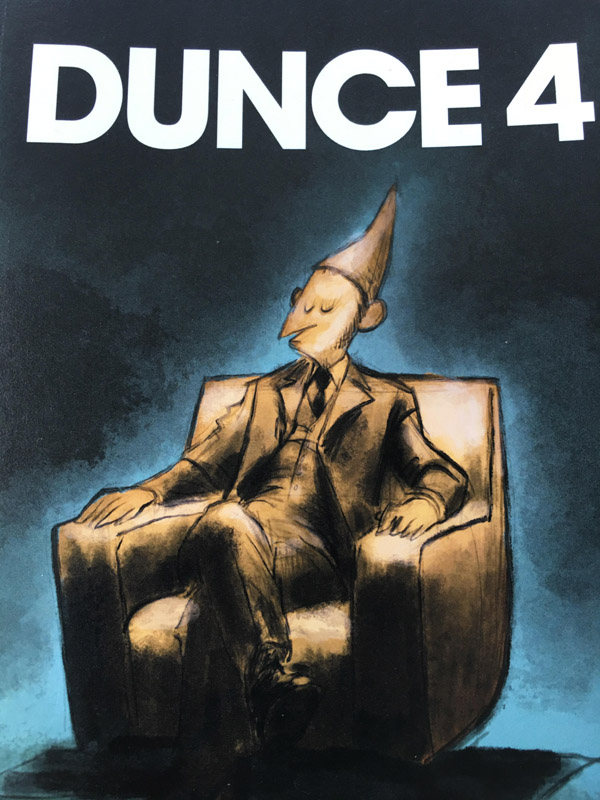 The Sproing Award is annually awarded by the Norwegian comic-book literary society Norsk Tegneserieforum. Jens Styve’s comic strip Dunce was nominated for the award in 2018, and won. This is not the first award Mr Styve has won for Dunce. Dunce was Mr Styve’s entry for a comic strip competition run in 2016 by Norwegian newspaper Dagbladet. Dunce won the competition.

The reason for this success is  straightforward. Dunce has a disarming, engaging sense of humour which is entirely reminiscent of Bill Watterson’s Calvin and Hobbes (1985-1995). Mr Watterson’s discontinuation of that series is still mourned by his readers. Dunce is an alternative universe, where Calvin has grown up and moved to Norway.

The main character in Dunce is Mr Styve himself, where he works in a small business, is exceptionally fond of his son, and dabbles in comic books. Mr Styve encounters issues in everyday, contemporary life and concisely deals with them through the prism of humour:

1. Mr Styve’s break-up with the power company’s sales representative, ending a relationship with was commercial but had become intimate;
2. Mr Styve’s coworker’s photograph of his cat going viral, causing the coworker to announce he is quitting his job to become a social media influencer;
3. The bossy AI, part-robot vacuum cleaner and part Amazon Echo, which looks like a Dalek (the major villain of British science fiction television show Dr Who) but has the attitude of a teenager – it wants to drive the car, and it’s sarcasm cannot be disabled;

4. Mr Styve’s relationship with his son, which is genuine and deep to the point of selfishness. In the most poignant of the strips, Mr Styve wants to play the online game Fortnite with his son, and is forlorn when his son instead prefers to be outside in the fresh air on a bicycle with a friend.

Our efforts in trying to describe these storylines through text muddled the message and pounds up the story into indigestible chunks. Mr Styve’s gift is to reduce these complex emotions and scenarios to a four panel story which is injected with humour. It is little wonder that Mr Styve has had such success.

Mr Styve has a Patreon Page and his comics are available on Comixology.