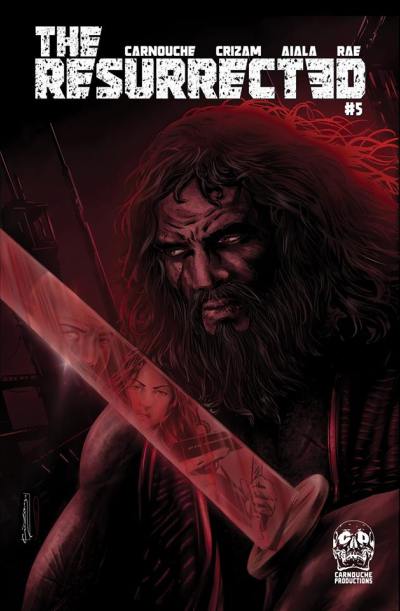 We have been following Australian writer Christian Carnouche’s independently-published title The Resurrected for some time, and with this fifth issue the title reaches a conclusion. For a summary of the plot and the issues of treatment of Australian Aboriginal people which the title addresses, please follow this link.

As expected, the underdog good guys defeat the evil corporation, albeit with a surprise or two. The wife of the lead character Cain Duluth died in an apocalyptic nanotechnology attack on Sydney. But Drexler, the megalomaniac mastermind behind the ongoing kidnapping of Aboriginal people for their DNA, reveals to Duluth’s horror that Duluth’s wife was a key part of the program. Duluth was entirely haunted by her death, and now he is haunted by her life. By the end of the title, Duluth reconciled himself with grief and is himself “resurrected” from his mental state of anger and unrelenting grief.

The program which Drexler is running concerns immortality. The quest for immortality by the rich extends back to Juan Ponce de Leon (1474-1521), who sought the Fountain of Youth. More recent examples include the urban myth of Walt Disney’s cryogenically frozen head, and Silicon Valley billionaire Peter Thiel’s idea of injecting himself with the blood of teenagers.

Drexler is successful in his task: his minions revive his own dead body without side effects. But Drexler’s effort to reanimate his mother have a terrible side effect. Drexler’s mother is horrified (not mortified) by her resurrection. She claws at her son, and then manages to grab his gun to inflict a fatal wound upon herself.

There is hint of Stephen King’s Pet Semetary to this aspect of the story. It is chilling. This story is set in 2037, and here in 2019, as technology advances and scientists seriously consider the idea of transferring the consciousness of humans into artificial intelligence platforms, The Resurrected raises the serious question of what duration of life is too much.

It is an inherent part of life to want to live. At a basic biological proposition, life seeks to perpetuate itself and the longer a creature is alive, the more likely it is that the creature has opportunity to do that. But as a philosophical level, life can be too long and a fear of death evaporates as the future unfurls and life becomes strange. The 116 year old Henry Allingham, born 1896 and deceased   2009, was a founding member of the Royal Air Force, but maintained that having a good sense of humour contributed to his longevity. The oldest living verified human, Frenchwoman Jean Calment, died aged 122 and claimed to have met Vincent Van Gogh as a teen in 1888 and regarded showers as a “queer invention”. A 2010 study of people aged more than 115 noted that the subjects “… did not fear death, and they appeared to be reconciled to the fact their lives would soon end.”

Drexler fears and resists death, and cannot successfully grapple with the idea of mourning his mother. Death and mourning are part of the human condition. This inability by Drexler to assimilate to mortality makes him not just a ruthless killer, but a dysfunctional person. Drexler is a truly inhuman villain.

The Resurrected ends at this point, but not we suspect Mr Carnouche’s career as a comic book writer. We look forward to reading his future works.