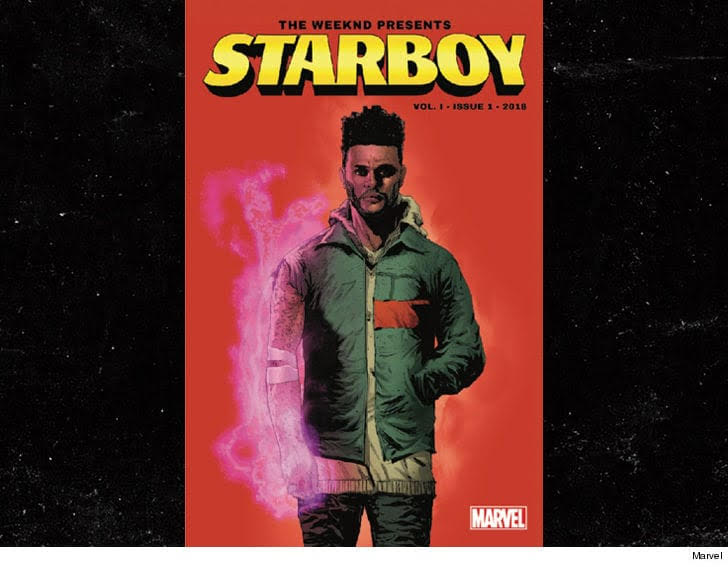 Pop singer The Weeknd’ superhero alter ego, “Starboy,” was misappropriated from a start-up comic book creator. This is the allegation set out in the lawsuit the comic book creator has commenced against the singer (whose real name is apparently Abel Makkonen Tesfaye, according to court documents) in California.

Eymun Talasazan, the comic book writer and plaintiff in the proceedings, says he created a comic book universe in 2014 that was designed to portray the superhero adventures of R&B and rap stars. (This is reminiscent of rock band KISS, which has appeared in comic books under license from Gene Simmons and Paul Simons, where the band members exhibited superhuman powers.)

Nothing came of Mr Talasazan’s initial meetings with The Weeknd’s business managers. These meetings are alleged to have concerned the creation of a comic called “Starboy”, featuring The Weeknd.

The trademark opposition proceedings were suspended when the matter escalated: Mr Talasazan commenced legal proceedings. On 14 November 2018 the matter of Eymun Talasazan vs. XO Trademarks, LLC, et al. (CASE NO: 2:18-cv-09611) was commenced in the federal district court for the Central District of California. Relevantly, the court document initiating the dispute says:

For over 10 years, Plaintiff has been in the business of creating and commercializing film, television and social media projects, and developing, creating and publishing comic book characters and concepts.

An avid comic book reader and a lifelong so-called “Rap/R&B” music fan, Plaintiff conceived of an original idea to use the vast popularity of Rap/R&B music to launch and promote a new breed of comic book superhero characters centered on the Rap/R&B music industry.

To this end, in or about 2014, Plaintiff created an original concept, a format and various character arcs and outlines for a series of comic books and/or film and television projects (Plaintiff’s “Original Concepts”) featuring various superhero characters each (a) with distinct personality traits and unique powers, and (b) related in various manners to real-life musicians and “Rap/R&B” stars (collectively, the “Musicians”) and/or elements of their work. Plaintiff set out to build a team of writers and musicians who would work together with graphic artists to bring Plaintiff’s creation to life.

Commencing in 2014 and continuing to the date this Complaint was filed, Plaintiff painstakingly developed, and began commercially exploiting and marketing to consumers in the business of financing, producing and/or publishing such ventures, a so-called comic book “universe” featuring Plaintiff’s Original Concepts outlining how various comic-book character Musicians and other fictitious characters interacted in an urban setting where they were charged with overcoming evil and otherwise challenging each other and a long list of villains for power in order to implement their own personal variant of justice (Plaintiff’s “Comic Book Universe”).

So far this sounds like an extensive effort at fan fiction, with no commerciality attached to the concept. But then it becomes more serious.

The recently deceased Stan Lee is also cited as a collaborator:

Importantly, the reference to the word “Starboy” is alleged to be not at all coincidental:

In the process of developing the Universe, Plaintiff concluded some Musicians might not want to use their actual and/or stage names in referencing their own superhero, so Plaintiff occasionally created original fictional characters whose names and attributes related tangentially to some unique element of the Musician’s music/lyrics and/or their personal or professional lives.

Mr Talasazan alleges that a conversation took place with The Weeknd’s business associates in early 2017:

In or about March of 2017, Plaintiff had multiple confidential conversations and in person meetings with Defendant XO, and/or one or more representatives and agents of Defendant XO and The Weeknd including, without limitation, Tony W. Sal (“Sal”). Plaintiff submitted to Defendants his concept for his Rap/R&B-centric Comic Book Universe and proposed that Defendant The Weeknd join other Musicians on Plaintiff’s creative team.

19. Plaintiff confidentially proposed to Defendants, by and through their authorized representatives including, without limitation, Sal, that Defendant The Weeknd’s character in Plaintiff’s Comic Book Universe take the name “Starboy” … a fictional character featured in one of The Weeknd’s songs, but which has no relationship to comic books, super powers, super heros, or any other film or television projects. The “Starboy” referenced in The Weeknd song has no connection to any superhero or comic book character.

In or about June of 2018, Defendants published, and/or authorized, encouraged, and/or enabled, various third parties to publish, a comic book series entitled “Starboy” (“Defendants’ Starboy Comic Book”) featuring the near identical premise Plaintiff had pitched to Defendants the prior year. Since June of 2018, Defendants and their affiliated parties (a) have sold and continue to sell their Starboy Comic Book and related intellectual property and merchandising, and (b) are otherwise using the word and Plaintiff’s trade name “Starboy” in the stream of commerce to identify, sell, market, publicize and/or commercially exploit their Starboy Comic Book. In doing so, as alleged herein, Defendants infringed on Plaintiff’s Trademarks and at trial after discovery Plaintiff expects to prove this damages sustained by virtue of Defendants’ various acts or omissions related to such infringement.

Amongst the remedies Mr Talasazan is seeking from the court are:

Defendants be ordered to recall all of Defendants’ Starboy Comic Books, or any other goods bearing Plaintiff’s Trademarks, or any other confusingly similar imitation of Plaintiff’s Trademark that are in Defendants’ possession or have been shipped by Defendants or under its authority, to any customer, including, but not limited to, any wholesaler, distributor, retailer, consignor, or marketer, and also to deliver to each such store or customer a copy of this Court’s order as it relates to said injunctive relief against Defendants;

Defendants be ordered to deliver up for impoundment and for destruction, all comic books, bags, boxes, labels, tags, signs, packages, receptacles, advertising, marketing materials, sample books, promotional materials, stationery, or other materials in the possession, custody or under the control of Defendants that are found to adopt, infringe, or dilute, or infringe on, any of Plaintiff’s trademarks;

Celebrity gossip website TMZ quotes Mr Talasazan’s lawyer: “This is not a case about who created or first used the term ‘Starboy.’ This case will decide if a songwriter automatically (without filing a trademark application) obtains trademark protection for all later uses of a word, even if those later uses have nothing to do with albums, song titles, music or lyrics.”

The mistake The Weeknd’s business people made was to entertain Mr Talasazan without some form of release of liability. As for Mr Talsazan, he should have insisted upon a non-disclosure agreement and restrictive covenant.

But of course, there is another Star Boy, in print for decades:

Fans of Marvel Comics’ major competitor in the superhero genre, DC Comics, will recall that there is the long-standing character called Star Boy. This character was created in 1961 as a member of the Legion of Super-Heroes, and then revamped in 2005 as a black character. How DC Comics felt about Marvel Comics’ launch of a title called StarBoy is unknown.