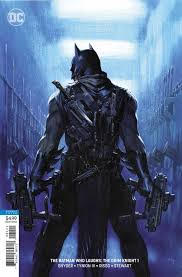 The Batman Who Laughs: The Grim Knight #1
DC Comics, May 2018
Writer: Scott Snyder

Batman seems to have a very bad case of parallel universe problems. After the initial exploration of this in the Metal storyline in early 2018 (some of which we reviewed), American writer Scott Snyder introduces us to a new parallel universe version of Batman, called The Grim Knight.

In The Grim Knight’s parallel universe, the orphaned Bruce Wayne does not just stare out the murderer of his parents with hooded eyes: the boy picks up the gun which killed his parents and shoots the murderer dead. From there, bullets rain down throughout Batman’s career. Batman is in this storyline a very obvious copy of Marvel Comics’ iconic vigilante The Punisher, replete with unlimited machine guns and ammunition, and even what looks like a surface-to-air missile slung over his shoulder.

Readers should be rightfully dismissive of this misappropriation.Unlike the other parallel versions of Batman we have encountered so far, this one was not the outcome of some sort of integration with another DC Comics property. The Grim Knight instead simply chose guns over lives.

Clearly, Mr Snyder’s editors could not say that The Grim Knight’s life was a consequence of some sort of interaction with The Punisher – Marvel Comics would never permit that.  And so instead the character speaks for itself, and DC Comics, we assume, hopes readers will buy the title on the critical hype of a fusion of Batman and The Punisher.

Mr Snyder draws deeply upon the classic Batman storyline from Batman #404-407 (1987) , Frank Miller’s Batman: Year One. Several of the scenes are replicated, including famously the inspiration to Bruce Wayne to become a bat. The character sits in the family library and silently confronts the bust of his dead father. A huge bat smashes through the window and perches on bust. But in this version, Mr Snyder has Bruce Wayne dramatically shoot the bat dead, to eye-rolling effect. Mr Miller must have smirked to read this page.

It is a weak story, and made baffling in that Mr Snyder has The Grim Knight a willing pawn in the elaborate game of The Batman Who Laughs (a parallel universe version of Batman fused with his insane nemesis, the Joker).

But perhaps for your reviewer the most horrible thing about this comic was walking into his office, a newly purchased copy in hand, to then learn of the gun massacre of forty-nine people in Christchurch, New Zealand. The cover to the comic depicts Batman with multiple automatic weapons in hand, striking an ominous and edgy pose. Romanticising these sorts of guns has consequences. The New Zealand government moved quickly over the weekend to implement a ban on semi-automatic rifles. May those poor people rest in peace.