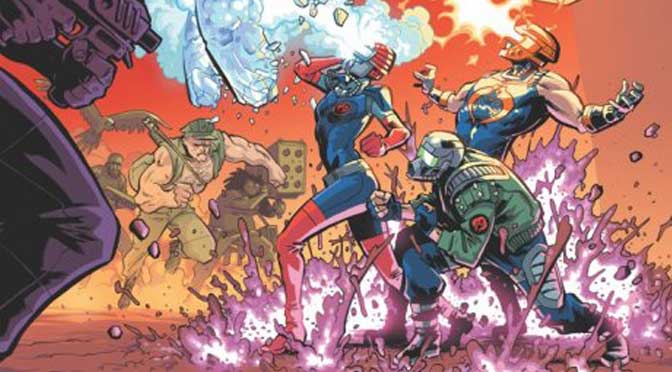 M.A.S.K. (Mobile Armored Strike Kommand) is a toy and cartoon franchise that was originally created by Kenner (a now-defunct toy company) in 1985. It involved an altruistic paramilitary group and their rival criminal organization V.E.N.O.M. Like many of the cartoon/toy franchises created in the 1980s, M.A.S.K. relied on a unique gimmick: each group had their own common vehicles that can transform into armored combat versions. This is triggered when the driver dons a specialized helmet. The franchise (and Kenner) has since been taken over by toy giant Hasbro, and is now licensed by IDW Publishing for use in comic books.

Unfortunately for fans of the M.A.S.K. franchise, M.A.S.K. Mobile Armored Strike Kommand First Strike does not seem to feature any characters or vehicles from the original franchise. And there is only a single mention of V.E.N.O.M. Instead, the reader is dropped in the middle of a massive fight involving another of Hasbro’s flagship toy/cartoon properties, the G.I. Joes. These are another altruistic paramilitary organisation (the 1980s seemed to be their natural habitant). The G.I. Joes in this opening are fighting their arch-enemies, Cobra agents, this time riding a giant mechanized King Cobra. Interspersed with this main fight scene is another, smaller fight scene between a G.I. Joe named Quick Kick and a group of ninjas trying to steal a nondescript snake-themed artifact. There is also a robot from the Transformers franchise participating in the melee, for reasons that are probably disclosed in some other comic. It is a conceptual mess.

But to give credit where it is due, Aubrey Sitterson absolves himself when it comes to his writing duties. It is clear that the comic is not targeted towards people expecting innovative storytelling and mature subject matter. It is meant to evoke the feel of Saturday Morning Cartoons from the 1990s, and the comic does it well – colorful and hyper-kinetic, yet strangely non-violent fights between good and evil, peppered with witty banter.

If there is any fault to be found in this comic, the blame rests on the shoulders of IDW Publishing and it’s approach to publisher-wide shared continuity. All of their licensed toy-based properties (which includes G.I. Joe, Transformers, M.A.S.K., Action Man, etc.) have stories that are currently set in a shared continuity. With little room for back stories, the comic books require the reader to have prior knowledge of who these characters are, what their allegiances and relationships are, and what brought them together in the first place. M.A.S.K. Mobile Armored Strike Kommand First Strike #1 is another example of this. A casual reader (even one who is a fan of the original 80s/90s cartoons) coming in with no prior knowledge of other IDW titles will have no idea what prompted the melee depicted in this issue.

But worse, where are the M.A.S.K. characters? The comic carries the brand name as its title. Should we not expect to see the characters?

The writing does not counterbalance the title’s inaccessibility, nor the fact that it seems lost even in the very first issue.