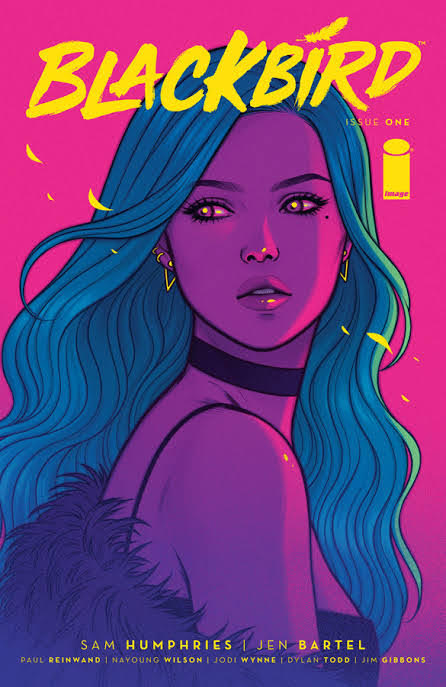 Alan Moore’s body of work casts a long shadow. Written for the America’s Best Comics imprint of US publisher DC Comics from 1999 to 2005, Promethea explores a hidden world of magic and symbolism. The protagonist is a goofy school girl named Sophie Bangs who becomes the vessel of a mystic being named Promethea, who in turn brings about a benign apocalypse. Promethea uses both her wit and spells to fight demons from hell, vicious shadows, and even the gloopy manifestation of the Y2K big. Amongst the many superb comics Mr Moore has crafted, Promethea ranks amongst the best of them. Fifteen years after its conclusion, Promethea remains a vivid, hypnotic rainbow, revealing hidden concepts through the fun and intriguing adventures of a primal sorceress.

Blackbird, published by American comic book company Image Comics, is Promethea’s conceptual niece. Here, a beautiful but messed up Californian girl named Nina struggles with life after she is involved in an earthquake and witnesses a giant, glowing, beautiful lion/dragon, later referred to as The Great Beast, prevent a bridge from collapsing. A spell causes her and other witnesses to forget what they have seen, but in Nina’s case, the enchantment does not stick.

Nina’s mother later dies in a car crash, and Nina’s life spirals downwards into opiate and alcohol abuse. Nina lives on the couch of her  more-together sister, Marisa. As a young teen she dreamed of being a “paragon” – powerful magicians who live a hidden existence, the fantasy fuelled by what she thought witnessed on the freeway overpass as a child. But as a late teen, confronting practical responsibilities, Nina is washed up. She has recovered from an overdose of prescription pills, forgets to attend job interviews or send her application for a graphic design course, and works in a bar serving drinks and cleaning up the overflowing dumpster in the back alley.

The experience of seeing The Great Beast leaves Nina with a sense of the loss of destiny, that somehow the bizarreness she has seen was because she was the centre of the universe. When the truth of the world is inevitably revealed to her, Nina’s loss and doubt is turned to malevolent fuel when a young and predatory sorceress, with an hourglass figure and a semi-opaque dress, stabs Nina in the heart with a mystic knife and uses Nina’s pain for dark magic. And later, Nina becomes the centre of attention of the beautiful boy paragon, Clint, with his golden eyes and chiselled cheekbones. Clint tries to kiss Nina. Nina is attracted to Cling but thinks Clint is a vain creep.  In between the pretty rival literally drawing out the teenage angst to her own advantage, and the handsome cad who has crossed the line, the comic signals itself very strongly to its target demographic: young teenage girls. Thus, this is the first romance genre comic we have reviewed since we started the World Comic Book Review four years ago. In that regard, Blackbird has a fundamentally different premise to Promethea. Promethea is a spiritual journey of enlightenment rendered as a superhero comic. Blackbird is a teen soap opera romance thinly masquerading as a magical fantasy.

Nina of course does become the centre of the universe – a powerful but untrained paragon. Her sister Marisa is kidnapped by The Great Beast, and it evolves that Nina’s mother is still alive and rules a fiefdom of paragons in Los Angeles. Los Angeles is carved up between various competing or allied “cabals”. Nina is able to navigate her way around the hierarchy of the paragons because she learned about them on the internet. Thus is the portal into mystic learning in the early 21st century.

Ms Bartel’s art is appropriately gorgeous – especially the covers of the beautiful main characters. They are so striking that they could be posters used to sell expensive cosmetics. Sophie Bangs in Prometheawas a bit of a dork with rumpled dress sense. Nina, however, with her cascading and heavy black hair is straight from a mid-range fashion catalogue. Ms Bartel gives both Nina and Clint the luminous eyes of urban sirens. The characters are meant to visually captivate.

Blackbird is not anywhere near as clever as Promethea. That is a shame. The world’s magic manifests as shimmering office towers and giant glowing statutes, tucked in amongst the ordinary concrete of modern Los Angeles. There isn’t much symbolism amidst these structures, and that which is there mimics the Greek zodiac (a monument to Aquarius towers over a city street, purpose unknown). Use of magic comes about from the deployment of shiny gems which lock into special bracelets. The gems can summon flames, arcing beams of power, and even compel the truth. In one slightly amusing instance, the gems can attract cats. If rendered in plastic, these would be ready made for online sale at the Blackbird website. There are some incomprehensible magic words which trigger spells, just like in Harry Potter. It is all a bit commercial, a bit dumbed-down.