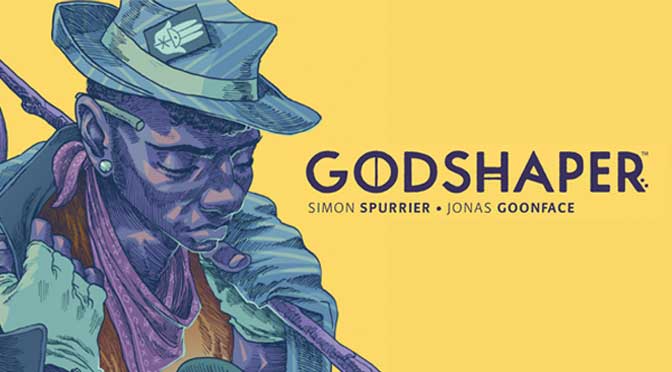 “Godshaper” is a new fantasy comic book series from American comic book publisher Boom! Studios and British writer Simon Spurrier, set in a fictional version of our reality in which the laws of physics have unexplainably gone awry in 1958, resulting in electricity and, as a consequence, all related technology it should have enabled becoming useless.

But instead of civilization collapsing or going back to the dark ages, society managed to survive and thrive. This is due to the appearance of “gods,” small creatures that have unique abilities and are fed through worship. Each person has a personal god, except for rare kinds of people called “shapers,” who have no gods but possess the ability to “shape” other people’s gods. A skilled shaper can modify a god’s looks and abilities.

The fictional world built in the pages of “Godshaper” is both compelling and oddly relatable. The fantasy elements emancipate the story from the impossible, but the social structure painted by the story is familiar. Here we see people rely on their personal gods as a replacement for the things that disappeared with technology. The services of the gods and the worship they feed on are traded and bartered, serving as a new form of currency. We get an example of this early on in the form of a god that can create pictures based on what a person is thinking, which is then offered in exchange for “beads” (the physical equivalent of worship.)

The gods all differ in look and the abilities they possess. Some are small with abilities that are only useful for novelty. But there are gods that have grown in size and have developed multiple and extremely useful abilities, such as the ability to conjure clothing from thin air or the ability to melt steel. This disparity led to social inequality as people are judged based on the usefulness of their personal gods. The people lucky (or cutthroat) enough to upgrade their gods rise in social status and become their world’s version of the wealthy elite. Conversely, the people saddled with little, relatively useless gods end up as second class citizens.

There is a wonderful economy in how Mr Spurrier managed to build this world and introduce it to readers in less than half of the pages that make up “Godshaper”’s first issue. This leaves ample room to introduce the protagonists: an exceptional shaper named Ennay and a “human-less” god he refers to as “Bud.” Thanks to the rules of “Godshaper”’s fictional version of society already established, it was easy to understand Ennay’s misfortune. All the skills, talent, and usefulness he has is worth nothing, and he is constantly shunned except when his services are needed.

A huge chunk of the story deals with Ennay providing his services to a wealthy merchant in exchange for clothes. Throughout the process of “shaping” the merchant’s god, Ennay is derided and snobbed, and his skills doubted. Even after proving his exceptional skill, the best he gets is grudging praise and dismissal. Thus go the mantra that explains his poor existence: “Always Needed, Always Hated”.

Ennay’s sidekick, the small amorphous god named Bud is even more interesting. As Ennay explains, gods that lose their “believers” fade away from existence within days due to worship starvation, but Bud seems to have existed without its believer far longer than what was possible. Bud has since accompanied Ennay discreetly in his travels, sneaking into Ennay’s customers’ houses and stealing supplies and rations while Ennay is keeping the customer and its god busy.

The brisk pace in which Mr Spurrier tells the story manages to set up the first conflict in the series halfway through the comic. Ennay and Bud are coerced by a former soldier named Clara Smith, who until a month ago in their timeline was respected as a sergeant who lost her arm in the service, but was framed and sentenced as a smuggler. The pages explained that court martial was brutal – Clara was beaten up and her large personal god attacked and drained by other gods until it was reduced to the size of a gecko.

Clara believes that the merchant that Ennay previously serviced was the true smuggler (a suspicion confirmed by the stock of rations that Bud managed to steal) and wants justice. Here we get introduced to yet another aspect of the society built in “Godshaper”. Clara can summon authorities and file a case against the merchant like one would do in the real world, the discrepancy between their stations in life ensure that nothing will come of it – or worse, that Clara may end up being the one charged with a case. Instead, Clara plans to use what is referred to as “a summoning of vespers”, where a god summons nearby deities who then judge the accused’s god, meting out punishment as they deem necessary.

Bud and Ennay are in disagreement over whether to help Clara. As Ennay points out, the summoning of vespers is divine justice, but it is as shaky as the human version. It is reliant on how strong the summoning god is. With Clara’s small, depowered god, the best it can summon are other weak gods. Considering that the god Ennay recently upgraded was already large and coming home with even more beads to feed on, the gods that Clara will summon will be massacred. (In this sense, and perhaps intentionally, the summoning of vespers is reminiscent of commercial litigation, and how a well-funded litigant can over-power an under-funded litigant.)

The comic ends with Ennay finally giving in to his conscience and Bud’s prodding. And here we get to see Ennay put a shaper’s abilities to use in combat, modifying Bud until he turns into a weapon. They get to the scene just in time, as the merchant’s god is in the process of crushing all of the vespers. With Bud, Ennay easily lifts the large merchant god with one hand.

This is the first issue, but Mr Spurrier already managed to craft an engaging fantasy story with its own believable set of rules. There are still a lot of details, such as Bud’s existence, or the reason for the existence of gods, that are so far unexplained. This does not detract at all from the story, and leaves the reader wanting answers. We highly recommend following this comic, offering a fantasy-based yet grounded take on the concepts of social priviledge and worship, while still offering enough action to keep it interesting to people who just want to see magical creatures fight each other.