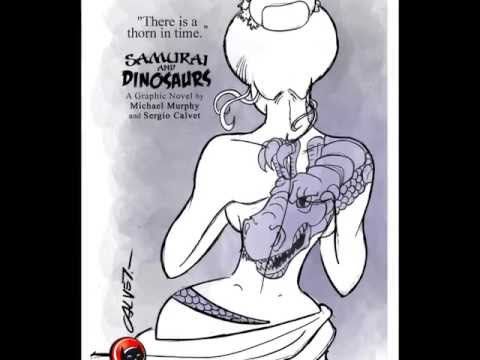 This is, if you like, a remastered version of the collaboration between writer Michael Murphy and artist Sergio Calver from 2010. The story is summarised in the Indiegogo pitch, and is reasonably straightforward:

“Samurai and Dinosaurs focuses on an elite group of Samurai dispatched into the Japanese wilderness to explore a meteor that came crashing down from the heavens a little over a year prior. What they discover is a thorn in time that is bleeding one era into another. Will they survive the journey, fight some dinosaurs, and stop time from bleeding?… Samurai And Dinosaurs harkens back to classic arthouse and grindhouse samurai films, as well as the great creature feature monster movies of old. It’s a genre mash-up unlike any you’ve ever seen.”

In fact, this comic is a chanbara, meaning “sword fighting” movie. Mr Murphy happily admits to the comic being a homage to Akira Kurosawa’s Seven Samurai (七人の侍: Shichinin no Samurai), a classic 1954 Japanese historical action film.

The quite jarring element of a Japanese-themed story is that it is not rendered in what a manga reader would regard as a typical Japanese artistic style. Mr Calvet is a prolific cartoonist – a list of his significant body of work is set out on his website: http://sergiocalvet.blogspot.com/p/about-author.html .

And neither is the plot especially Japanese. Despite the nod to Kurosawa, the plot of Samurai v Dinosaurs could just as easily have been a chapter out of Manifest Destiny (see https://www.worldcomicbookreview.com/2019/11/01/manifest-destiny-volume-6-review-fortis-and-invisibilia/ ), or taken place in the European Middle Ages, with a group of Crusader knights. Indeed, any ragtag team of soldiers could have substituted in for the protagonists. This is accentuated by the absence of strongly Japanese character names, place names, and costumes (indeed, one of the characters, Testubun Doragon – a Japlish riff for “Steel Dragon”) wears a steam-powered mechanical suit in the shape of a dragon, vaguely reminiscent of jizai okimono – the articulated metal animals made by Japanese blacksmiths).

The way in which the story unfolds, in which each character is given a full page portrait, and then another page or so of vignette background, is an innovative and engaging technique. Here, we deal with some of the more interesting members of the cast:

1 The main character is Ren, a master swordsman whose wife is killed by the capricious Daimyo Katai. When Ren is summoned by his former master to assist with a new threat, Ren burns down his house. It is a striking moment early in the comic: Ren is not coming back, and has given himself no option to come back;

2. Ryouchou Sasshi is a swordsman and artist, so skilled that when he kills a class mate at his warrior school he manages to make the man’s blood splatter look like the drawing of a bamboo stem. Yet he is rejected by hi school for being too much the artiste, and of humble birth; and

3. Of all the characters, the most intriguing one is the chef, Somastu Itame, who has adopted a decidedly and strangely appealing Zen attitude to all aspects of his life.

Other characters are unnecessarily odd. Feudal Japan had a variety of strange types of people, ranging from ninjas, to ronin, to pirates. Introducing the Iron Man-substitute and a demon-possessed fighter named Seirei-bosu Kaigara with the appearance and personality of a mink was probably unnecessary given the options available from actual history.

But fundamentally, this is a chance to see fine Japanese steel slice up dinosaurs. Velociraptors are the first level, their cunning on full display as they stalk and besiege an abandoned cottage: there is a remarkably startling scene where a velociraptor pushes through the cottage walls and bites one of the cast. Boss level is, naturally, a tyrannosaur. There is a twist brimming with poetic irony at the conclusion. As action adventures go, Samurai v Dinosaurs certainly lives up to its name.