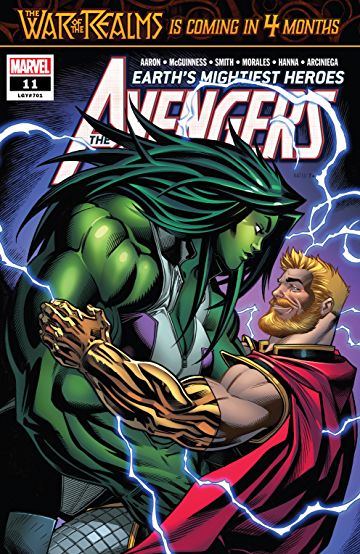 The cover to this comic features the Marvel Comics superhero characters Thor and Hulk (usually, “She-Hulk”) in a passionate embrace, framed by lightning. Part of this issue of The Avengers is concerned with this blossoming romance, in the form of a date watching dinosaurs do battle. (The date goes poorly.)

But most of the issue is concerned with geopolitics.

The new Avengers superhero team is under the leadership of King T’challa, also known as the Black Panther. T’challa is the benevolent autocrat of an economically thriving, liberal, fictional African country called Wakanda. (Any resemblance to contemporary Rwanda is entirely coincidental: Wakanda was a creation of Stan Lee’s in 1966.)

With a base in Wakanda and a Wakandan leader, the Avengers are no longer under the supervision of the United Nations nor subject to the scrutiny of the United States Government. Further, T’challa initiates an outreach program: a gathering of superhero representatives from Russia, Japan, Israel, China, Canada, the Middle East, and the United Kingdom. This manifests by way of having them all over for lunch.

But the Russian superhero Ursa Major (a KGB agent who can transform into a bear) points out to Black Panther the elephant in the room. There is no representative present from the United States. “The country with more superheroes than I’ve got ringworms,” grows Ursa Major. The were-bear drinks too much and loses his temper (he is teleported to Siberia by the ever-prepared T’challa) but not before he refers to a recent attack upon an oil rig off Alaska which was repelled by forces unknown. The attack was by agents of Namor, the king of Atlantis and ardent environmentalist: the oil rig is owned and operated by Roxxon, a truly sinister conglomeration which has had a long run in the pages of Thor (and is one of our imaginary stocks to buy): and the unknown defenders of the oil rig are a group called the Squadron Supreme of America. This is a re-jigged version of the Squadron Supreme (we have previously reviewed the title of this latest incarnation of this superhero group).

What we have then is:

1. an isolated United States not participating in a global discussion and has decided to go it alone. Further, it is protecting a morally reprehensible corporation in its desire for fossil fuels;

3. Britain, represented by the superhero Captain Britain, makes an earnest comment around building a better future together, with the closing remark, “Please, no Brexit jokes.”

There are some funny moments. The dinner party is served by empty Iron Man suits as waiters, apparently without Iron Man’s (Tony Stark’s) knowledge:

Shaman: “Then why don’t you start, T’challa, by telling us how you convinced Stark to provide the waitstaff?”

T’challa: “No convincing required, Shaman. Tony should not leave his laundry laying around if he does not wish me to put it to use.”

But the surprising aspect of the title is the willingness to confront the politics of today, with the various cast members acting out some of (but not all) the political tensions between countries which we presently, sadly, witness.

And the date between the Hulk and Thor? It starts very poorly, and then ends with some charming words from Thor, and a kiss. They make an oddly endearing couple.