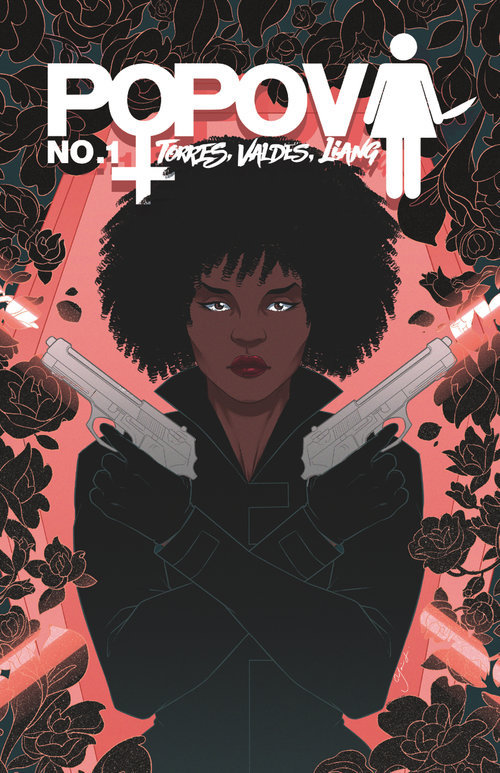 This is the first of our reviews, issued this week, of independently published comics, to coincide with Free Comicbook Day. We start this exercise with the examination of a newly discovered gem.

The story starts with two lesbians on a date at a seafood restaurant. One of them is murdered with cyanide. The waitress, named Scarlet, is an assassin. “Why did that pretty lady just nose-dive into a bowl of her beloved shellfish broth?” The answer is blunt and devoid of ideology. “You don’t piss off someone with a predisposition to violence, and the bankroll to pay for it.”

Scarlet Rose is a well-trained murderer in hiding. She lives with Mark in Queens in New York. Mark has no idea who Scarlet Rose is until a visit from Sadie. Sadie beats Mark and holds him as a hostage.

At that point the story takes on an ardent feminist militant tone. “You are killing women… and sleeping with the oppressor,” accuses Sadie.

Women’s refuges, those places to which women and children can hide from abusive spouses, are small islands of recovery. They do not come with their own military. Yet this is the premise of “Popova” #1. It is brilliant because, in retrospect, it is obvious.

It evolves that a women’s refuge, run by Madame Rozanov, protects those who seek its protection through unconventional and brutal means. Those men who assault women are killed. Scarlet describes this in a flashback: she smashes in the door of a wife beater, punches him into unconsciousness, splashes him with kerosene, and incinerates him with glee.

On that occasion, though, Scarlet has been duped. The child was not battered by the father, but instead by the mother. And so Scarlet decides to go against “the code”. Realising she has innocent blood on her hands, she takes revenge on the mother. Killing a woman appears to be against the rules of Scarlet’s club of assassins, and so Scarlet fakes her own death and hides in the most improbable of places: within a straight relationship.

On a collision course with Scarlet and Sadie are:

a. Charles, a policeman suspended from duty on allegations of wife-beating. Charles is a friend of Mark’s, and when Sadie abducts Scarlet, Charles and Mark track them down;

b. Rozanov, who, with her armed cadre, arrive at a remote horse stable to deal with the bound Scarlet. There are faint shades of Quentin Tarantino’s “Kill Bill” ensemble, or perhaps David Mack’s cast from the acclaimed faux-manga “Kabuki”, in the motley collection comprising Rozanov’s companions. Sadie is convinced this is an exercise to bring Scarlet back into the fold (the location of the stable is no accident: the rebellious horse must be broken). But Scarlet knows that, despite the code, Rozanov intends to kill her.

The writers, Dre Torres and Alex Valdes, are crisp in their dialogue and admirably restrained in their monologues. The plot and its underpinning ideology is painted with precision and skill. It is hard to determine at this stage whether this is a feminist text, a counter-feminist text, or a feminist deconstruction. There is a genuinely challenging intellectual conundrum at play which we find remarkably thought through. Scarlet’s zeal is fragmented by being played, and she thereafter plies her trade with nihilistic abandon. Should Rozanov’s business in murder be a facade for profit-driven assassination, then where does it leave zealots like Sadie?

“Popova” is a stone mined from the same conceptual mother lode as Brian Azzarello’s “100 Bullets”. It is sharp, hard, and brilliantly cut. Genuine creativity and a super-abundance of thought by Messrs Torres and Valdes has gone into its creation. We are not prone to overstatement but on this occasion, we find it difficult to find a flaw.