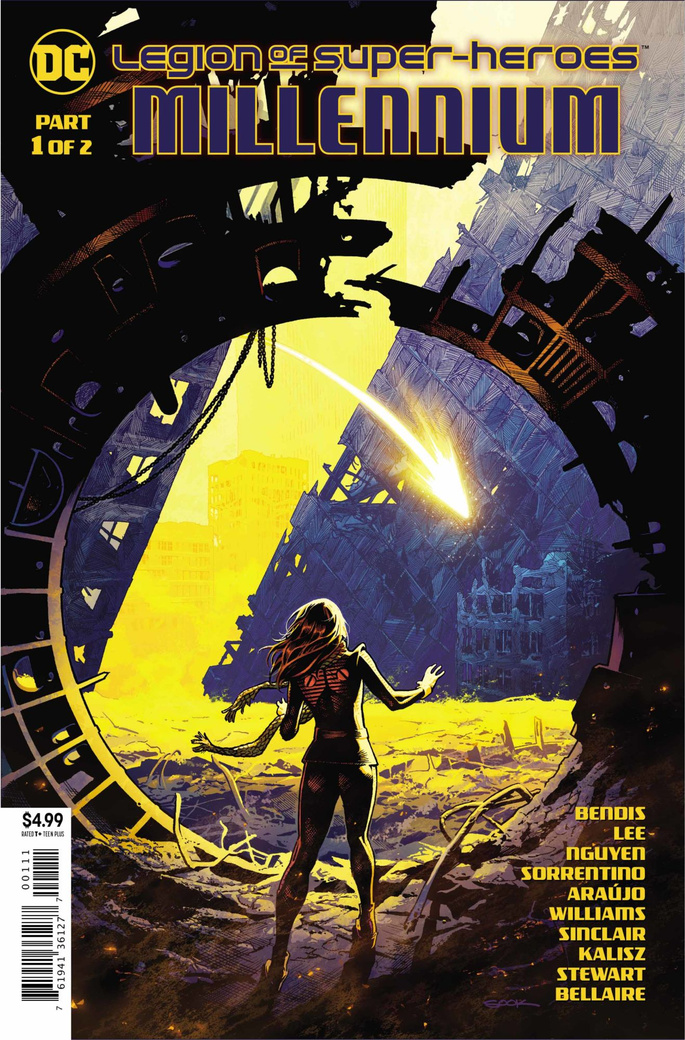 Brian Michael Bendis sits in pole position on the grid, as it were – a writer of American superhero comics who has been so successful in generating sales that he was granted a mandate by DC Comics, one of the two big publishers of superhero comics in the US, to play with as many of DC Comics’ more obscure properties as he wishes. Already, we have seen Mr Bendis reconstitute a superhero team called Young Justice  https://www.worldcomicbookreview.com/2019/01/30/young-justice-1-review/ . Now, Mr Bendis starts the engine of another equally popular and defunct team, called the Legion of Super-Heroes.

We celebrated the sixtieth birthday of the Legion last year https://www.worldcomicbookreview.com/2018/04/11/happy-sixtieth-birthday-legion-of-superheroes/ . With over thirty lead characters, each with their own individual personalities and superpowers, the Legion is almost unique save perhaps for Marvel Comics’ army of mutant X-Men. Mr Bendis is set to transform some of these characters so as to introduce diversity. Thus, one of the lead characters, Lightning Lad, is rendered black. Another, Shrinking Violet, is also now black (with long pink hair). This might anger the Legion’s devoted fans, and will certainly aggravate the vocal Comicsgate crowd. Comicsgate is an online movement by which some fans of superhero comics express their resentment of changes rendered by the American superhero comic book publishers to, first, diversify characters through gender and ethnicity switches, and second, de-emphasise the blatant sexuality of some of female characters (notably Marvel Comics’ superhero Captain Marvel, once known as the swimsuit-clad Ms Marvel). Mr Bendis’ plans to change the ethnicity of two key characters will infuriate those who believe that their favourite childhood role models should not be tampered with.

Legion fans are better placed to adapt to changes to the cast. The characters have been re-wrought by DC Comics’ editors many times over the decades, a consequence of the stories being set in a malleable future. Perhaps devotees will simply be happy to have the characters back in print for the first time in seven years.

Mr Bendis drives the story using an obscure character called Rose and Thorn to investigate the future in which the Legion live. (The subtitle “Millennium” is shared with a 1988 DC Comics storyline to do with infiltration of the ranks of superheroes by malign aliens robots called Manhunters. Perhaps this is of significance?) The device of an introduction to the future through the eyes of one of our contemporaries admirably borrows from Aldous Huxley’s 1932 novel Brave New World, in which a character with the sensibilities of a denizen of the twentieth century is toured through a dystopia of genetic manipulation. The universe of Legion, though, has usually been more positive. In this latest iteration, Mr Bendis has introduced the concept that the thousand year old Supergirl, the super-powered cousin of DC Comics’ preeminent character Superman (and the only Legion cast member to actually appear in this first issue), is the president of the Earth.

Ageless benevolence coupled with democratic rule seems utopian to us. On the other hand, the cover of this first issue sees Rose walking through high technology ruins, shaped by the happenstance of shadow and reflection to look like the Legion’s symbol. Perhaps that cover imagery is more a statement about the franchise’s status than about the fate of the Legion’s future.

Where Mr Bendis gets it wrong, though, is the path to the future, a revisitation of some very dated concepts which should have been put to rest a long time ago – the long-dated Tommy Tomorrow and the Planeteers, the tired concepts of the apocalyptic world of Kamandi, and, more relevantly, a future version of Batman called Batman Beyond.

There might be nods of recognition from superhero comics readers older than fifty. For anyone else, the story is a muddle of odd and meaningless concepts. It reads as self-indulgent goofing off. Mr Bendis might be the race leader, but he should stop trying to rev-up vehicles with rusted chassis.