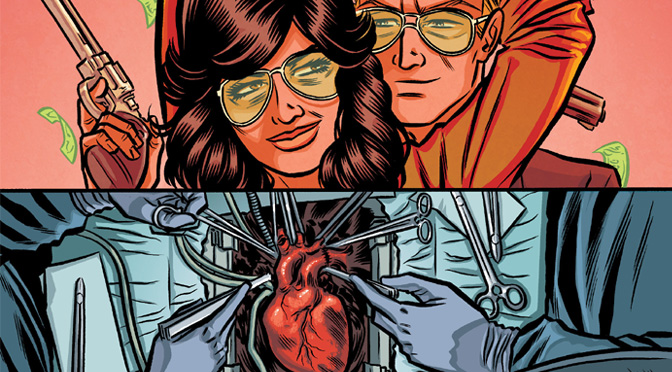 Christopher Sebela’s “Heartthrob” explores second chances, short lives, and shared consciousness. The protagonist is a woman named Callie Boudreau, who was born with a congenital heart disease that gave her a very defined expiration date. We meet the character after a successful heart transplant procedure, where she is shown haranguing the doctor for the identity of the donor.

With finesse, Mr Sebela manages, in the span of six pages, to introduce the character, reveal a huge chunk of her backstory including all the heartbreak and rejection she has had to suffer due to her condition, and, also, the things she does (or does not do) as a reaction to living on borrowed time. And while the author uses internal monologue as exposition, this is achieved with economy: the visuals are not obscured by walls of text, a problem endemic to writing in the contemporary US comic book industry spawned by American writer Frank Miller’s “The Dark Knight Returns” (DC Comics, 1985).

“Heartthrob” also shows one of the unfortunate realities about heart transplants – even the successful ones do not come with a guarantee of prolonged life, and can instead sadly be a delayed sentence. This is where the story takes an interesting turn: not only is Callie’s new heart showing no signs of rejection, but she is healthier than before the surgery. The combination of renewed health and being resigned to eventual death propels Callie to do things she normally would not do, from getting back at a boyfriend and the HR manager he has been cheating with, to quitting her job, and even minor infractions such as stealing cigarettes and money from a bar. Mysteriously she is frequently visited by a suave, blonde con artist who knows everything about her.

The identity of the mysterious man will be immediately obvious to a perceptive reader, but the cliffhanger in this first issue is when Callie and her new partner resolve to do something that each of them have always wanted to do, namely a.) stage a sensational heist, and b.) get back at her employers. The comic then cuts to a panel showing Callie with a shotgun, several security personnel at her previous place of employment tied up, and the blonde man seemingly nowhere in sight. Has the blonde man abandoned the protagonist after egging her to go on a destructive rampage?

“Heartthrob” is an engaging, satisfying read in its first issue, while still launching multiple subplots for future issues to resolve. All of this, achieved in less than 30 pages. We can recommend this title.