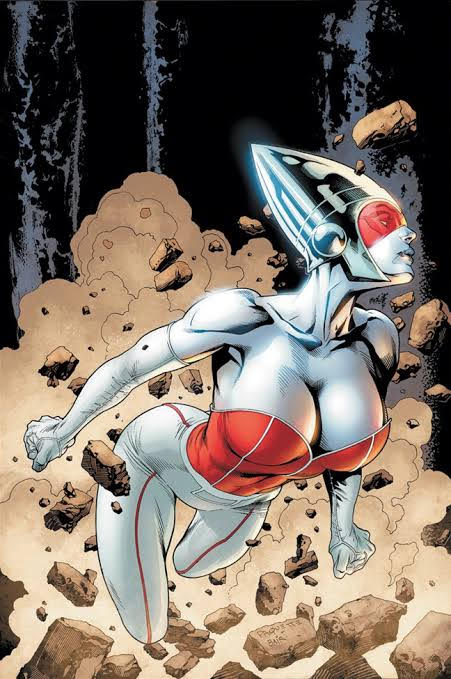 Comic books sometimes appear to be an endless masquerade, character after character after character adorned in a variety of masks. Masks are an inherent part of the visual iconography of comic books. They evoke mystery and secrecy, two elements of any adventure or crime caper. Masks in Western literature and other media more broadly have a deep pedigree – notably, Alexander Dumas’ The Man in the Iron Mask (1840s), Gaston Leroux’s The Phantom of the Opera (1909), and Fran Striker’s The Lone Ranger (1933). In Japanese culture, gigaku, bugaku, and noh theatre all invoked the iconography of masks to convey amongst other things status and characterisation.

But masks in comics are not just about mystique and semiotics:

1. When built into helmets, masks become protective – they shield the face and eyes from danger.

2. For crime fighters and for villains in comics, the primary rationale is to conceal identities, so as to either better facilitate a crime or to avoid revenge attacks.

3. Masks can also be functional – DC Comics’ The Sandman wears a gas mask as to avoid breathing in the sleep gas he dispenses using a modified pistol, and DC Comics’ undersea villain Black Manta wears a masked helmet as part of a scuba apparatus and as a destructive laser projector.

In 1984, American comic book writer Marv Wolfman briefly explored an interesting legal side-issue to do with masks in the superhero genre. Writing in Tales of the Teen Titans #54, Mr Wolfman used the mask of an assassin called Deathstroke the Terminator for its primary purpose: to conceal the villain’s true identity and acquit him during in a criminal trial. Who is the man under the mask? No one can say, beyond reasonable doubt:

Deathstroke’s mask oozes swagger: the right half of the mask is pitch black, communicating to all that the character is blind in one eye, but is so good at his job that he does not care who knows of his diminished sight.

But there are many more curious masks in use in comic books. Here is our list, in no particular order, of the ten oddest masks we have seen in the medium.

A mutant superhero, Cyclops is a leader of the X-Men, an ever-growing cast of characters whose adventures are published by Marvel Comics.

In 2011 Cyclops was given a costume revamp, whereby the mask containing crystals controlling powerful eye beams disappeared and was replaced with a large red X. This was an aesthetically striking change which self-evidently ties into the logo symbology of the X-Men.

But practically speaking, no one has ever been able to explain how Cyclops actually sees through the black mask, which otherwise covers the entirety of his upper face.

A mask of a screaming bird of prey might be designed to terrify adversaries, but the original design of DC Comics’ winged superhero Hawkman was manifestly odd. The beak elements of the mask are perpetually open and features a (what we assume is a rubber) tongue poking out into the air. Frequently the mask’s eyeholes were drawn so that they sat on the character’s forehead – another visual challenge for the wearer.

Hawkman’s mask was for a time shared by his female companion Hawkgirl. Both masks were eventually replaced by less cumbersome designs, although the design reappeared – in a starkly reimagined form – in Mark Waid’s and Alex Ross’ Kingdom Come.

Ostensibly, one of the purposes of a mask in comic books is to conceal the wearer’s identity and thereby protect him or her (and loved ones) from criminal retribution once the mask is removed.

Why Galactus, Marvel Comics’ eater of planets and a cosmic force, requires a mask at all is entirely unclear.

(The same rationale applies to Hela, the Queen of the Underworld from Marvel Comics’ Thor: as a goddess of death, what is the rationale for wearing a mask?)

An evil foe of the mutant X-Men, Stryfe wears a masked helmet in what we assume is some sort of future warlord fashion statement: a chrome mask mounted with a series of large blades. The character was designed during the grim and gritty 1990s phase of American superhero comics, when various titles were generally being militarised in terms of content and style. Sharp, gleaming blades certainly communicate danger, but having them attached to a helmet is as subtle as a firecracker on a birthday cake.

Perhaps the mask wasn’t what most readers were noticing. The Bulleteer first appeared (in this incarnation) in Grant Morrison’s Seven Soldiers of Victory (DC Comics, 2011). The character’s impermeable silver skin is very striking but offset by a helmet which looks like a giant high calibre bullet. It is a kitsch design stuck onto a highly sexualised body. Yet, in a deliberate juxtaposition by Mr Morrison, the characterisation of the Bulleteer was positively normal. The Bulleteer is Alix Harrower, a teacher of autistic children and a throughly ordinary and nice person who is distressed and baffled to be in the position of having superheroes.

As odd as American superhero masks can be, Japanese characters’ masks can be in another orbit entirely. From Japanese manga Future Diary (Mirai Nikki), here we have Yomotsu Hirasaka. This character is a blind illusion-maker with some difficulty discerning right from wrong. Why he wears a mask shaped like a giant eyeball is not clear.

Death sometimes wears a bowling ball bag. A member of the Kid Pirates, the pirate Killer from the epic manga One Piece is a very dangerous blonde man who fights using with two large scythe blades. Given the lethal cast of One Piece, Killer is remarkable in his skills to stand out from the crowd, and indeed, Killer is also known as ‘Massacre Soldier’. On the other hand, his mask his baffling to the point of being amusing: the mask has many, many eyeholes but we assume Killer has only two eyes.

8. Karasu Yumeshima (“My Mental Choices are Completely Interfering with my School Romantic Comedy”)

From the curiously entitled “My Mental Choices are Completely Interfering with my School Romantic Comedy” (Ore no Nounai Sentakushi ga, Gakuen Love Comedy wo Zenryoku de Jama shiteiru), Karasu Yumeshima is a member of the Reject Five. His popularity at high school is probably not assisted by wearing a bandage around his head, upon which is written the Japanese kanji for “crow”. We are not sure how we can top this one.