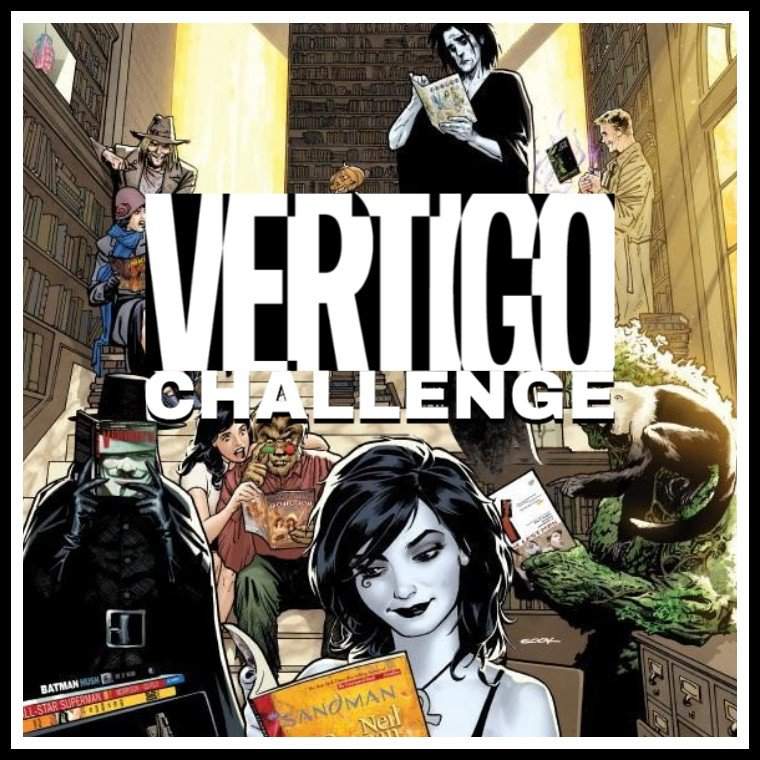 Eulogies do not ordinarily include a prayer for vengeance. This one does.

Vertigo Comics was one of three imprints which American publisher DC Comics launched in and after 1993. The others, Paradox Press (1994-2001) and Helix (1996-1998), did not last long. But with the direction and oversight of editor Karen Berger, Vertigo Comics thrived.

The impact that Vertigo had upon popular culture during its heyday remains pronounced. The depth of its publications is well catalogued: we list some of the better known titles below –

1. The Sandman written by Neil Gaiman, which won a World Fantasy Award in 1996 and no less than 26 Eisner Awards;

2 Transmetropolitan (a refugee from Helix to Vertigo) written by Warren Ellis with art by Darrick Robertson;

3. A Sandman spin-off called Lucifer, written by Mike Carey, which has in turn spawned an ongoing popular Netflix television series;

5. The Invisibles by Grant Morrison;

6. Hellblazer, written and with art by a variety of creators from 1988 to 2013 which gave rise to both a movie and a television series;

7. 100 Bullets by Brian Azzarello and Eduardo Risso (long touted as a video game);

10. A History of Violence, (another refugee to Vertigo, this time from Paradox Press) created in 1997 by John Wagner and Vince Locke, which was made into a movie in 2005;

11. V for Vendetta, by Alan Moore and David Lloyd (originally published by DC Comics in 1982 and then with collected editions published by Vertigo) which was made into a movie in 2005;

14. The Losers, by Andy Diggle and Jock, also made into a motion picture.

Aside from odd cameos in The Sandman and Hellblazer, and strange re-imaginings like Doom Patrol, Kid Eternity, and Shade the Changing Man, these titles were for the most part not superhero playgrounds. By genre Vertigo was touted as “alternative” or  “underground”. But in truth, having regard to popular culture of the time (think of musicians Marilyn Manson and Cypress Hill, and movies The Nightmare Before Christmas and What’s Eating Gilbert Grape? both released in 1993), Vertigo was 1990s mainstream.

Mainstream success was a new and unexpected thing for DC Comics in the lead-up to 1993. The comic book publisher had stumbled upon an audience outside of franchise readers. The term “franchise readers” describes comic book aficionados who dutifully read the American teen-orientated action-driven adventures of established superhero characters like, in the case of DC Comics, Batman and Superman. This was (and mostly remains) a world of capes to artistically demonstrate movement, masks to hide the secrets of the champions and villains, the readership’s desire of the triumph of justice, and non-lethal combat.  DC Comics has made a lot of money out of franchise readers over decades. It is a safe financial model, and has been the foundation stone for many superhero motion pictures. Artistically, and to be fair, with notable exceptions, it is a black slime mould which spreads into damp voids.

But suddenly in and around 1993, a very diverse group of people, who were not franchise readers, were reading and discussing Vertigo Comics’ publications in book shops in the United States, cafes in Sweden, universities in the United Kingdom, and at book clubs in Australia. It was as if Vertigo had slipped between shadows and found itself in a universe known to DC Comics’ management only as something so unachievable as to not merit the endeavour – mainstream, serious, intelligent acceptance, that bigger place where books and journals were digested and where American comics had never really been. Vertigo was a key that opened hidden doors from the small, spare room broom closet into the mansion, both for its readership and for its owners.

Ms Berger left Vertigo in December 2012, and after a four year stint as editor by Ms Berger’s lieutenant, Shelley Bond, Vertigo’s editorial control was folded into DC Comics. This was a fatal move. DC Comics is fundamentally conservative. It does not take creative and potentially non-commercial risks. DC Comics’ editors are too lead-boned to be jockeys for the black velvet creature that was Vertigo.

As a consequence, Vertigo stumbled into the muck. Sales and interest fell away. Triage was attempted on Vertigo but failed. Lucifer was revived twice, once horribly and the second time as a better effort – https://www.worldcomicbookreview.com/2018/11/30/lucifer-1-review/ , and last year DC Comics rolled out Mr Gaiman and a crew of equally unsmiling scribes in post-goth black denim in an (ongoing) effort to capture yesterday’s daybreak – see https://www.worldcomicbookreview.com/2018/08/15/the-sandman-universe-1/ . But this exercise was a replication of DC’s franchise model, that rotting fungus, not the sort of creative spark which ignited and propelled Vertigo beyond franchise readers. (We do not know what Mr Gaiman thinks about The Sandman becoming a jigsaw piece in DC Comics’ franchise model. Interviews suggest that Mr Gaiman was as surprised as anyone as to The Sandman’s success.)

Yet to its credit, DC seemed to want to persist. On 7 June 2018, American publisher DC Comics applied for three US trademark applications, each for “DC VERTIGO”, which suggested a long term plan for the imprint.

But a year later these trademark applications (which, as an aside, are still pending) became manifestly redundant. In June 2019, DC Comics announced that the Vertigo imprint would be discontinued in January 2020.  All of DC Comics would going forward be published under the “DC” brand, and categorized by intended reader age: “DC Kids” (8-12 years), “DC” (13+), and “DC Black Label” (17+). (We have reviewed the first Black Label title, Batman: Damned – https://www.worldcomicbookreview.com/2019/02/03/batman-damned-2-review/ )

This month it became clear the timetable for the cessation of Vertigo had been brought forward. The Sandman Universe Presents Hellblazer #1 was published on 30 October under the Black Label imprint, and The Dreaming #15 and House of Whispers #15 are both due for release in early November as Black Label titles. Vertigo is dead.

“Corporate thinking & creative risk-taking don’t mix.DC nixing Vertigo was a longtime coming. But hey, we changed the game & we had a blast doing it! Honored to have worked with so many incredibly talented creators & editors & thx to all our fab readers!”

This comment was re-tweeted by C. Isabel Brain, with the observation,

“Someone tweeted “Vertigo won the war,” and it’s true and it was because of visionaries like Karen Berger we have so many awesome genre-bursting comics to enjoy from so many people!”.

Vertigo did indeed carve new paths for other creators who wanted to tell fresh, original stories. But some of us are not so sanguine. Why did Vertigo have to die? DC Comics and its ultimate owner, AT&T, could have continued to use Vertigo as a research and development lab to create and foster innovative titles which would lead to cross-media productions. All sensible investment strategies include a high risk / high return component as a spread on yield. DC Comics instead wants lots of yeast but no bread. It is, frankly, stupid, and presupposes that the mould of franchise readership is never-dying.

“Our decision to rebrand all content under the singular DC imprint is just that…Amazing books that comprise the Sandman Universe… will continue. Big plans for year two!”

“Year two”? Vertigo was born over a quarter of a century ago, in 1993. Black Label is the compost for The Sandman spin-offs, says Mr Lee, not a safe harbour for new ideas. The thought that DC Comics will grow limp flowers from the sticky corpse of Vertigo Comics should make Vertigo’s readership sad and angry. It is not just a change of name. It is end of the slow and fatal suffocation of a dark and magical thing. The safe franchise model has had its way.

Vertigo has many scattered offspring, including Ms Berger’s Berger Books imprint at Dark Horse Comics, Black Crown Comics (the creative home of Shelley Bond), and the legacy of daring is ably carried by Image Comics. Vertigo is dead, but we fervently pray that it will be avenged by its children.