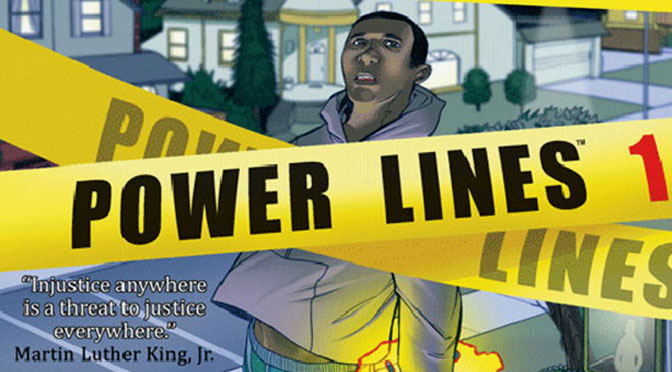 In 1921, amateur archaeologist Alfred Watkins coined the term “Ley Lines,” which he used to refer to supposed alignments of geographical places of historical importance both man-made and natural, theorizing that these alignments were intentionally created guides to assist in travelling via line-of-sight navigation.

Writer John Michell adopted the concept of ley lines, and bestowed upon it spiritual and mystical significance within the pages of his 1969 book “The View Over Atlantis”. This fictional take on the ley lines has since been used by numerous authors across various media. Some have built conspiracy theories around the concept, most famously novelist Dan Brown in his best-selling book, “The Da Vinci Code” (2003, Doubleday Books).

The concept of ley lines might be a partial inspiration for Image Comics’ new ongoing series entitled “Power Lines”, written by Jimmie Robinson (who is, remarkably, also credited as the creator, illustrator, inker, and letterer). The comic’s story revolves around the eponymous “Power Line”, described as discovered by Native Americans 2,000 years ago and was used successfully to defend their lands from the European settlers. But the Indian Removal Act of 1830 dispossessed its Native American custodians and this mysterious power line was lost.

On the face of it, there is nothing novel about the premise. The Power Lines can grant people superhuman abilities. The lines’ place in the story as catalyst to superhuman power is plainly replaceable by any number of other plot devices which we repeatedly see in this genre.

The story however features a unique melange of characters. The first is an African American teenage boy called D-Trick, who out of ennui has joined a neighborhood gang engaged in a vandalism spree in another state. After being caught and chased by policemen (and after finding out that the gang leader’s true intention is to commit burglary), D-Trick unknowingly taps into the power lines, and escapes the pursuing policemen by taking to the skies. The policemen, not wanting to deal with the paperwork (as one of them is already in prior trouble for drinking on the job), decide to forget about the incident.

D-Trick is portrayed not as a malicious individual, but instead is caught in the socioeconomic void of boredom and no opportunities. This character is juxtaposed to the other person who has been “chosen” by the power lines: 48 year old widower, Sarah Bellingham.

Sarah is portrayed as extremely religious to the point of zealotry, ill-tempered, and a racist. The character is also owner of a phone that was stolen by one of D-Trick’s fellow gang members. The phone is insured, but the case holds a sentimental value as it is a gift from a deceased family member. And the fact that it was stolen by people of color makes the issue very personal for the bigoted Sarah. The police are of no help, despite the phone containing tracking software. It is tracked to a neighborhood that is predominantly African-American, and which the local policemen seem to want to avoid, using jurisdiction as a convenient excuse.

So Sarah takes it upon herself, with her 24-year son Kevin in tow, to track the phone and recover it from the thief. The intercession goes poorly. Despite Kevin’s assurance that they do not want any trouble and just want the phone casing, three of D-Trick’s fellow gang members decide to beat him up. It is at this point where Sarah unwittingly taps into the Power Lines and swiftly dispatches the would-be assailants using super-speed. The issue ends with Sarah dismissing D-Trick’s enquiries about what she felt, and the glimpse of a mysterious Native American man watching both of them from the shadows.

As expected of a first issue, this comic is not self-contained but is the beachhead to a larger storyline. Not all of the key players have been revealed, nor the rules governing the lines and the powers they bestow. But the choice to use characters that are nuanced rather than neither altruistic nor outright evil. The cast is interesting and serves as an effective teaser for the next installments. We will be keeping a close eye on this title.