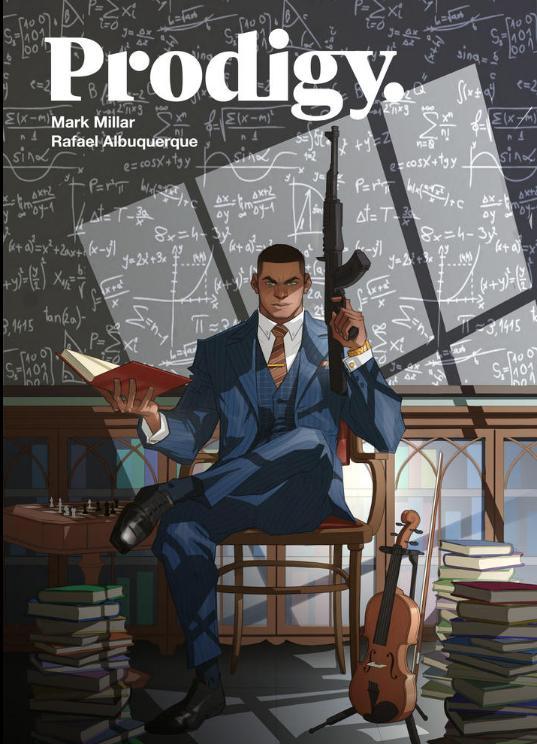 “Will to power” is a self-improvement concept courtesy of German philosopher Friedrich Nietzsche (1844-1900): the idea that by sheer force of will, a person can achieve their ultimate potential. Within comics, this relentlessness usually comes linked to startling intellect – Ozymandias in Alan Moore’s Watchmen, DC Comics’ Batman, and Warren Ellis’ Simon Spector (and more on that character shortly).

Writer (and Netflix creative research and development dynamo) Mark Millar has adopted this formula in a science fiction setting – a new title published by Image Comics entitled Prodigy. Edison Crane is a thirty-something year old polymath, capable of solving the ballistics problems of interception of an Earth-killing asteroid still years away, all while effortlessly beating several of the world’s best chess players. As an encore, Crane jumps the Grand Canyon on a motorcycle, with no parachute, while on fire, fulfilling a dare given to him by a pre-teen fan. (We also get some highly amusing insights into Crane’s youth.)

The title features Mr Millar’s trademark jaunty style, sassy dialogue, and sensational plotlines. Crane flies to the Northern Territory to assist the Australian government to determine why cars have been appearing out of nowhere. The cars are of unknown make and model, featuring license plates for states which are not in existence. Inside the cars are mice in cages, their organs crushed. At nearby Pine Gap (an actual, semi-secret American spy facility located in the Australian outback), Crane inspects three spacecraft and their human corpses, the vanguard of an invasion from a parallel dimension. It is there that Mr Millar delivers his best line, through the words of a female military officer: “Who would have thought that ET was Caucasian?” It is a churlish observation – Superman is inexplicably white, after all. And it is a laconic observation, because Edison Crane is black.

Back in 2000, there was a very erudite, anonymous fan / commentator on the long-defunct DC Comics message board who went by the handle Theory9. This poster made an interesting observation about inherent racism in superhero comics: that there was no example of a black person with advanced mental powers (telepathy, for example), because such a character would suggest that black people were at the forefront of evolution. Instead, most prominent black superheroes were super-strong or tough, relying upon their physiques rather than enhanced brain-related superpowers. Telepathy was the preserve of white people.

The disturbing aspect of this theory was that it was backed by evidence. Of all of the many thousands of characters that the major American comic book companies had created over the decades, only one – Jackson King, a member of an obscure superhero team called Stormwatch and published by Wildstorm Comics (now a division of DC Comics) – was a black person with mental superpowers. But what of smart black people? The two notable black characters with an advanced intellect are:

1. Mr Terrific, created for DC Comics in 1997 by the influential John Ostrander, and touted as the “third smartest person in the world”;

2. Christopher Priest’s re-working of Black Panther for Marvel Comics, from 1998-2003 – a highly capable, hyper-intelligent strategy master, who happens also to be the king of a fictional African nation.
Prodigy follows the trail created Mr Ostrander’s work with Mr Terrific and Mr Priest’s work on Black Panther. But there is another character which Edison Crane entirely mimics.

Simon Spector was created in 2005 by Warren Ellis, in a compendium called Apparat, published by Avatar Press. As noted by Wikipedia, modeled after Doc Savage and The Shadow, Simon Spector is a wealthy man who apparently lives in a skyscraper in Manhattan. He has been trained to kill barehanded and makes use of drugs which make him “super-sane” with advanced cognitive abilities, at the cost of cutting his life expectancy with each dose.

Spector is also black. Spector was the outcome of Mr Ellis’ musings on what a pulp detective would look like if first created in the 2000s – uncannily smart, self-sacrificing, a deadly martial artist, and independently wealthy. And further, why did such a character need to be white? In the 1930s it would have been highly controversial to have created such a character. In 2005, an ethnically diverse mastermind made much more sense.

Edison Crane is almost identical as a concept to Simon Spector, save that Crane does not use brain-enhancing drugs. Mr Ellis and Mr Millar are friends (as evidenced by Mr Ellis’ rib-poking interview of Mr Millar in Mr Ellis’ 2001 diatribe Come in Alone). It seems implausible that Mr Millar would not have known of Simon Spector when creating Edison Crane. What is going on here?

Regardless, Prodigy is a fun read. Edison Crane is an eminently likeable character (unlike many of Mr Millar’s other creations). How Crane deals with the foreshadowed invasion is a story we will be following with enthusiasm.