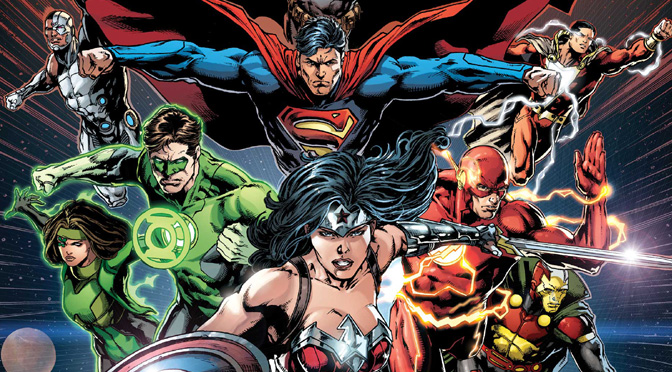 As the fiftieth issue of this title, American publisher DC Comics have published an extra long issue, concluding an ongoing story line entitled “The Darkseid War”.

The Justice League are a collection of DC Comics’ principal character assets, teamed-up and pitted against various threats in what is now many decades of stories. For reasons not explained in the issue but which have apparently unfolded in earlier issues of Justice League, some of the Justice League’s members are imbued with the powers of the New Gods. The New Gods were a concept created for DC Comics by legendary American comics writer Jack Kirby in 1971. The characters comprising the New Gods each have a separate and distinctive set of superpowers.

In this single issue, the superheroes face a panoply of threats:

a. a character called “Grail”, the daughter of a long-standing and very powerful alien villain called Darkseid. Darkseid himself was killed in battle in an earlier issue;

b. remnants of an alternative universe group called The Syndicate, which consists of evil versions of the Justice League;

c. a possessed and temporarily superpowered acquaintance and, over the decades, love interest of Wonder Woman, named Steve Trevor;

d. Lex Luthor, the arch-foe of Superman, endowed with the power of Darkseid;

e. a baby, the child of the evil Superwoman of the Syndicate, which inexplicably saps, or rather zaps, the New God powers of the Justice League members, somehow, and combines them so as to be reconstituted as Darkseid. This is explained to both the members of the Justice League and the reader by Wonder Woman as some sort of rite of the Greek Amazons, with all of the unwavering authoritative certainty of a television evangelist. The suspension of reality necessary to enjoy a tale of fantasy of this nature, already frayed, entire snaps at this point.

Of all of the characters, Grail has the most potential interest. She has been trained to kill her father, is aware that she is a tool being used by her mother to that end, and projects her self-loathing at all. But the dialogue which writer Geoff Johns gives to Grail paints the character as a two dimensional vaudeville villain. In the conclusion of the comic, Grail has somehow escaped with the baby and sits oddly naked in a cave, nursing him. Why this has occurred is simply not obvious from the comic, other than the baby has the demonic face of Darkseid and so symbolically, perhaps, should be raised in an underworld.

Mr Johns bangs this complicated plot together with the finesse of a toddler with pots and pans. There is a brutal death: Superwoman is incinerated by the empowered Lex Luthor who tackily celebrates the cessation of Superwoman’s prattling, even though he has had sex with her. There is a moment of heroism: a woman named Jessica Cruz is possessed by the power of Volthoom, one of the Syndicate. She willingly places herself between a New God named the Black Racer (an avatar of death and a sort of 1970s interpretation of the Grim Reaper) and Justice League member the Flash, so as to be the death which the Black Racer must (illogically) cause, and thereby save the Flash’s life. There is a heist: Syndicate member Owlman purloins the interdimensional chair of a New God named Metron. And there is a cost to the victory: super escape artist Mr Miracle is separated at the end of the tale from his wife, Big Barda.

It takes concentration and effort to foul up a Justice League story, but Mr Johns with apparently little effort fouls it up quite horribly. The depth of the iconic characters and their rich back stories, the characters’ dramatic array of opponents, and the charisma of their interactions almost always inherently make for an entertaining read. Such stories do not need to be complicated. One of the best Justice League stories was penned by English writer Grant Morrison, whereby a villain named Prometheus out-thinks the Justice League (with the help of a few deus ex machina plot devices) and is only barely defeated in a lucky turn of the tide (JLA #16-17, 1998). In another story by American writer Mark Waid, the ever paranoid Batman has his secret counter-measures stolen and deployed against each member of the Justice League (JLA #43-46, 2000). In yet another story Aquaman, stalking longtime Justice League adversary T.O. Morrow, is entombed in ice and his peers must scramble to save him (Justice League of America Vol 1, #193, 1981). Each of these stories, amongst so many others spanning decades, are desperate, enthralling, entertaining adventures of DC Comics’ leading characters.

The reality here is that this issue is a springboard for several plots to be perpetuated in other stories and other titles. Batman learns from his time on Metron’s chair that there are three Jokers. Lex Luthor arrives on Darkseid’s home planet to a hero’s welcome and assumes a throne in a suit of science fiction armour featuring Superman’s logo. Jessica Cruz, who heroically saved the Flash, is not, as it turns out, dead after all and becomes a Green Lantern. Owlman is reduced to a bloody smear on Metron’s chair by a new, unseen threat. Wonder Woman learns she has a male twin brother. Superman learns he is dying. The thunderous revelations, each more outrageous than the last, peel out as if a man with a waxed moustache and bowler hat was standing behind a curtain and vigorously shaking a sheet of tin into a megaphone. It is a cheesy procession of soap operatic twists, in the extreme.

But more fundamentally, in functioning as a springboard for exciting new concepts, the issue forgets to function as a cogent story. Mr Johns, busy in his role otherwise as DC Comics’ Chief Creative Officer, overlooks the inherent role of the issue, which is to be entertaining of itself.