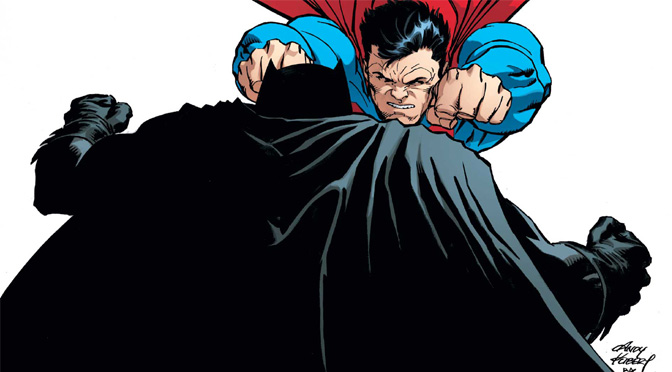 This is the fifth book in the third volume of Frank Miller’s seminal Batman title, “Dark Knight Returns”. We have previously reviewed earlier books in this third series. It is written by two veteran and acclaimed comic book writers, Brian Azzarello and Frank Miller.

The tense psychology of Batman, with his joyous release of fury and raw intimidation, the depth of the supporting characters, including DC Comics’ other paramount character, Superman, and the snappy comedic dialogue which juxtaposed with the grim monologues, was enough to propel the story in 1986. But this story, like “Dark Knight Returns II”, instead, sadly, draws heavily upon the panoply of characters owned by DC Comics – Superman, Wonder Woman, the Atom, Green Lantern, Aquaman, and the Flash. In particular, as we have previously discussed, the storyline picks up on an oddity of the Superman mythos dating back to Action Comics #242, published in 1958: that there is a city of beings from Superman’s home planet, Krypton, who were shrunk to microscopic size by one of Superman’s enemies. The city survived the destruction of Krypton by virtue of being kept as a trophy. Mr Azzarello and Mr Miller have written a story by which some of these Kryptonians, led by a fanatic with delusions of being God, are expanded to full size and terrorise the planet with their alien superpowers. Batman and his colleagues oppose these would-be dominators of Earth.

Batman has been depicted for some time now as being ever prepared to the point of easily overcoming even all-powerful adversaries. In this volume, Batman eradicates the superpowers of the alien invaders by seeding clouds with Kryptonite, a fictional substance capable of weakening or killing Kryptonians. As a plot device, it is a little wonky. With their superior senses, the Kryptonians could have recognised the threat and easily disposed of it at a distance.

But setting aside this clumsy deus ex machina levelling of the playing field, the essence of what is missing from this title is the high quality, clinically angry internal monologues which were Mr Miller’s virtuoso skill, depicted in the original series from 1986. The writers endeavour to evoke this highly finessed scripting in this volume. Here are some examples:

“Fear. The strongest, purest primal motivation there is. My lieutenant. My nanny. My invisible friend. Fear is why I get out of bed. Fear is what I dream about. Fear is why I don’t kill. There is so much that I’m afraid of – that we all are – While you? Just look at you, all – fearless. You don’t stand a chance.”

The other striking piece of internal monologue is these observations of the mob rule of Gotham City – Batman wryly observes that he has “never used a mob as a weapon” before, and this is followed by intriguing monologues:

a. “They’re tearing Gotham to pieces. Burning everything they – we – built in an effort to smoke me out… All to appease an alien lunatic who hangs over them in the air like sulphur.”

b. “I learned early there’s nothing that cures a mob’s bloodlust that its own blood. But now is not the time for a cure. Now we feed the disease.”

Lara, the daughter of Superman and Wonder Woman, is also given sparse but striking dialogue, almost certainly penned by the frugal Mr Azzarello, which captures her core character: during a kiss, she bloodies herself and injures Baal, a Kryptonian suitor. The character says, ““Did I like it? I’m an amazon.”

But this all pales in comparison with the ruthless, furious monologues of the first series:

a. “This should be agony. I should be a mass of aching muscle – broken, spent, unable to move. And, were I an older man, I surely would … … but I’m a man of thirty – of twenty again. The rain on my chest is a baptism – I’m born again … ”

b. “You don’t get it boy… this isn’t a mudhole… it’s an operating table. And I’m the surgeon.”

c. “You sold us out, Clark. You gave them the power that should have been ours. Just like your parents taught you. My parents taught me a different lesson… lying on this street… shaking in deep shock… dying for no reason at all. They showed me that the world only makes sense when you force it to.”

d. “You were the one they used against us, Bruce. The one who played it rough. When the noise started from the parents’ groups and the sub-committee called us for questioning… you were the one who laughed… that scary laugh of yours. “Sure, we’re criminals”, you said. “We’ve always been criminals”. “We have to be criminals”.

“The moment was… perfect… and you… don’t have the nerve… Paralysis… really…” And indeed, something does rustle as it leaves, and that ill-wind is palpable to the reader.

In many ways Mr Miller popularised the internal monologue in comic books – especially for subsequent writers of Batman comics – with this chilling text. They are impeccable, raising goose-bumps and ever-fresh.

Perhaps it is too much to expect again some of the best writing in the comic book genre to manifest in this third episode. Instead, we are treated to faint echoes of greatness.