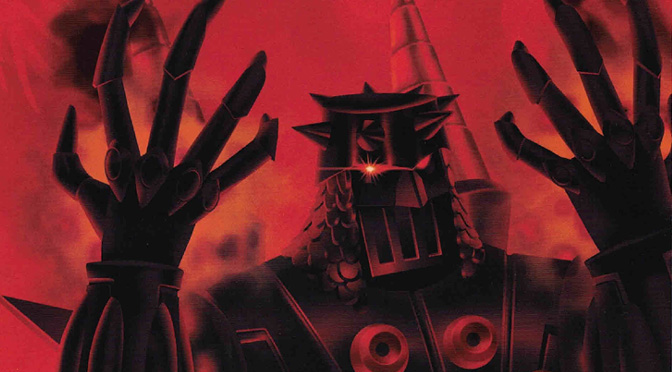 Comics published in support of a line of figurines are often shaky texts. The writer of such a title can at best hope to impart a monochrome backstory and characterisation to the moulded plastic toys: a solid plot to accompany this artistically bleak mission is a rarity.

The Micronauts were a line of toys based upon a Japanese toy line called Microman, owned by a company called Takara. The Micronauts were licensed from Takara and were first launched in the United States by a company called Mego in 1976 until 1980, with very significant commercial success (Mego itself later improbably became insolvent). The supporting comic book title’s creative zenith was in a crossover with Marvel Comics’ top selling title, “Uncanny X-men”, in 1984: the writer, Chris Claremont, ever-meticulous in his characterisation of his much beloved cast in “Uncanny X-men”, ensured that the story contained in the limited series did not falter. Marvel Comics otherwise published a first Micronauts series from 1979 to early 1984, and a second series from late 1984 to 1986. Since 1986, other publishers have produced Micronauts titles from time to time, with very limited success.

IDW Publishing have licensed the rights to the Micronauts from toy manufacturing giant Hasbro to produce this new title, and appear to have been granted considerable artistic leeway in doing so. Even better, IDW have engaged the services of a talented writer, Cullen Bunn, to script the Micronauts’ new adventures. So, while the characters have the same names and look just as they did in 1980, the plot is renewed, and Mr Bunn’s efforts are, if not inspired, then at least pleasing.

The Micronauts are a ragtag bunch of lawless adventures in this title, and Mr Bunn has injected a weary sense of time’s passage into the series. The glory days have passed, and the characters are reduced to smuggling. Acroyear in particular, a mainstay character of the toy line, is described as a military relic which should have been decommissioned long ago. This is clever. Readers familiar with the Micronauts from their youths, having bought the title in a bout of nostalgia, have also aged. The effluxion of time is shared by both the characters and the readers – everyone is feeling the years. (In this regard, the title is reminiscent of the second series of DC Comics’ under-rated science fiction – and concept-licensed – title “Atari Force”, published in 1984 to 1985: characters have been allowed to age and sour with time.) The title is otherwise action-packed: betrayal and danger are the exclamation point to the end of this first issue.

This title is a pleasant surprise in terms of quality, but we query the longevity and its potential success without Hasbro’s line of accompanying toys and the marketing budget which Hasbro could bring to bear to promote the concept, where IDW Publishing cannot. Unless Mr Bunn does something not just good, but radical with this title, we fear that nostalgia alone will not ensure its survival.