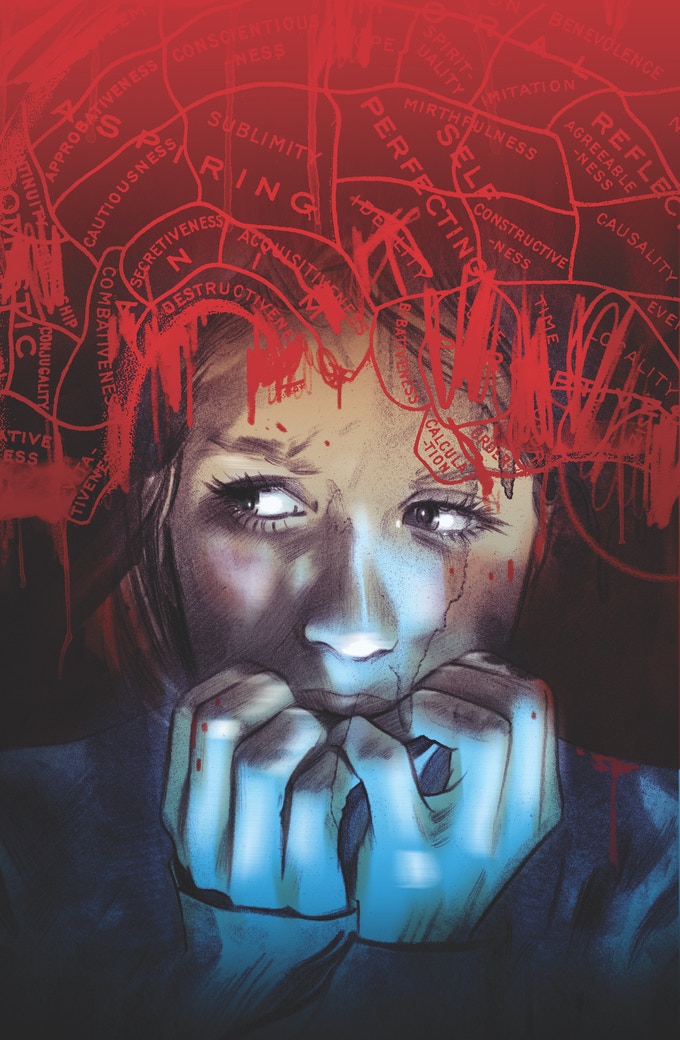 As the sheer number of artists suggest, Murky Waters is a compilation of different stories, all written by Christian Carmouche. We have reviewed Mr Carmouche’s The Resurrected https://www.worldcomicbookreview.com/2019/03/18/the-resurrected-5-review/ over the past years (and, in the interests of full disclosure, he was kind enough to write a review for us). This latest publication is quite different from the science fiction dystopia of The Resurrected. It is instead a series of vignettes with different horror themes at their core.

These range from The Gaze, a brief monologue by a beautiful but deranged psychiatric patient; a snapshot of the thought processes during zombification in Darkness Neverending, the insanity that comes when a story breaks the fourth wall in Breaking Down the Walls; the 1980s romance horror of between two young people, Duc and Mara, in Lost River; Ashes and Dust, in which Mr Carnouche revisits indigenous Australia in a three page post-apocalyptic psychological horror; and the six page story House of Cracks, set in Tunisia and examining the difficulty of overcome suffering and loss. (There is something quite cosmopolitan about the backdrops of each of these stories. Each seem a long way removed from the cliches of American Gothic.)

The second of the series is entitled Cogito Ergo Sum. A pretty office worker suffers from escalating delusional symptoms – the feeling of being watched and of voices in her head. Medication does not work and the burden of being schizophrenic drives her to suicide. It evolves that the delusions are real and her life is not. Post-human creatures, sterile and unfeeling, keep a handful of surviving human brains in glass bubbles for study in an simulated environment. Mr Carnouche taps into the existential horror of motion pictures like The Matrix – that our senses lie to us. The story also recalls Elon Musk’s view that there was a percentage chance that we are actually living in a computer simulation. The tale provokes unease.

But our favourite is The Ocean Beneath. On the surface, it is a horror tale based again upon apparent psychosis, with the creepier aspects of the motion picture Being John Malkovich thrown in for good measure. Mr Carnouche has the main character, Max, quickly reveal the comfortable and meaningless facade of his life within a series of succinct dialogue boxes in the first two pages. A body washes up on a beach – and the body looks exactly like Max. Mr Carnouche sets up the reader to assume this is corpse some sort of alternate reality version of Max. But instead we are lead down a nightmarish maze of guilt – a terrifying mode of self-reflection. Mr Diotto’s art is striking and very reminiscent of the work of the wonderful comic book artist David Aja.

This is an entertaining read from cover to cover. Mr Carnouche should spend more time in lockdown to produce anthologies of this calibre.