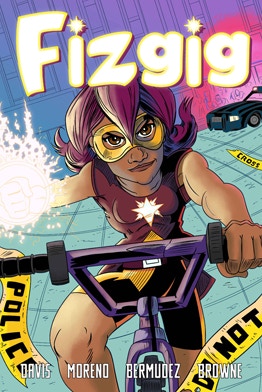 For the past two decades at least, the large American publishers of superhero comics have been shifting the bulk of their publications to suit a much older demographic that what we would have been part of up until the late 1980s. We see this most plainly with the release this year of Batman: Damned, published under DC Comics’ Black Label imprint – see https://www.worldcomicbookreview.com/2019/02/03/batman-damned-2-review/ . The first issue featured Batman’s silhouetted penis, and the second issue featured the attempted rape of Batman by Harley Quinn.  It is not exactly child-friendly fare.

So what are the alternatives for new, young readers? Here is one. Billed as an all-ages superhero genre comic book, Fizgig #1 presents the first 28 pages of a 100 or so page story about a very young superhero with formidable powers.

The plot ticks all the boxes of superhero cliches. A 14 year old girl named Allison Serrano is cat-sitting for her reclusive neighbours, a couple named the Kims. The cat is decidedly naughty: it mangles a security keyboard which, when Allison tries to repair it, reveals an underground laboratory. It evolves that the Kims are rogue scientists out to sell energy-shaping nanite robots to to a crime family.

Allison, courtesy of the cat yet again, accidentally gets the nanites stuck to her hands, and from there absorbed into her body. This accident gives Allison a superpower – she can shoot from her hands high temperature bursts of heat.

(The writer, Calico Davis, is perhaps having some fun with us – a “calico cat” is an orange and black patched cat, and Ms Davis uses her feline avatar as the deus ex machina of the story.)

The all-ages label results in a very coherent but very predictable plot line – as it should. This is a primer for readers aged six to ten. It has the sort of messages that a child would find entertaining – the secrets in the neighbours’ house, a mischievous pet, a secret origin, immediate finesse over a unique and powerful gift, and the respect of authority figures in a shift of the childhood power dynamic (in this case, with a policeman). It has very low level violence, and some mild but not scary threats. And it has some youthful humour – the policeman notes that Allison arrives at the scene of a bank robbery on her bicycle.

In that sense Fizgig fills a gap which the big US publishers have left in their chase for the adult audience which was expanded following the success of Marvel Studios’ battalion of superhero motion pictures. We recommend this comic to parents wanting to sit with their children and introduce them to the superhero genre by way of a fun and harmless comic.

Fizgig is presently the subject of a Kickstarter campaign: https://www.kickstarter.com/projects/calicodavis/fizgig