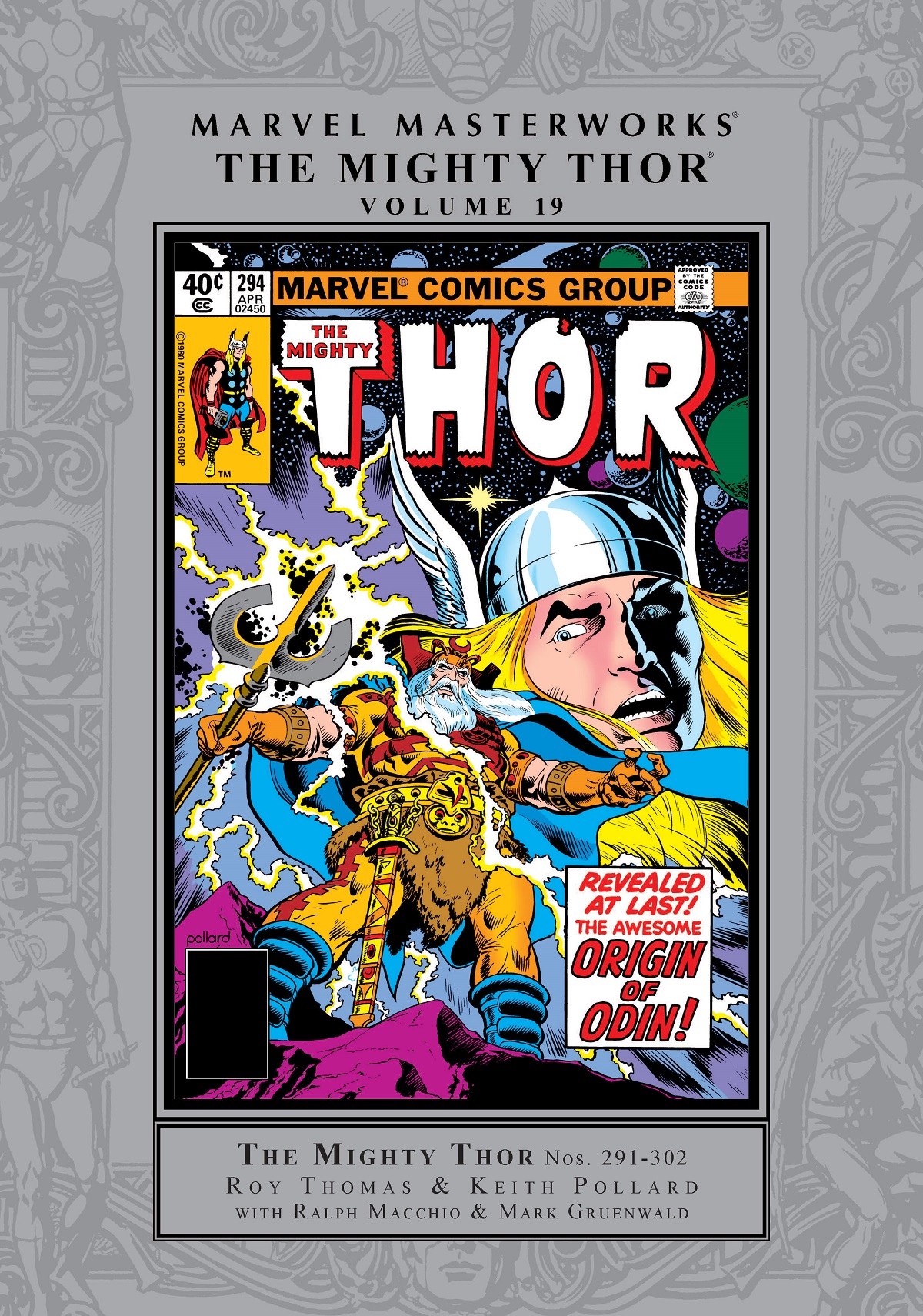 MILLENNIA AGO ALL THE GODS CONVENED to ponder the fate of the world when the Celestials arrived from outer space to inspect and cultivate life on Earth, which they had themselves planted many ages ago in a cosmic gardening project. This scenario in the original MIGHTY THOR, from 1980, embraces archetypal images common to humanity, combining garden and gods, judgment and worthiness. The language in early issues of the story by master writer Roy Thomas regales the place and time when gods met, as a first-hand witness transcribing the meter with a stone stylus in shorthand on bronze plates.

The story of the encounter with the Celestials runs for a dozen issues, beginning in earnest in Issue 291, with “Odin and Zeus … side by side against the Eternals and Thor,” a title that sets the stage for the ensuing drama that unfolds in a roundabout narrative told by the plucked-out eye of Odin in an alternate dimension, forced by a frustrated Thor who keeps threatening the eye each issue to get to the point. The eye retells the medieval Song of the Nibelungen, a famous drama birthed in Danubian regions thronged by Vikings, full of deception and murder, and somehow intertwined with Thor’s earthly soul and Odin’s unfathomable long-range plans to survive the twilight of the gods when the time arrives.

Earlier, following that godly conference millennia ago, Lord Odin and other gods pledged to the Celestials they would not interfere, having no choice then in the balance of power, but meanwhile Odin prepares. In the “Special 300th Issue” we see how everything fits together at last as Odin appears in the armor of the Destroyer, striding across the Andes wilderness taller than the highest peaks, enlarged by the combined energies of all the beings of Asgard, save Thor who was in another dimension conferring with the eye. At his side, Odin wears the Oversword of Asgard, that huge sword often seen in the citadel that we know already betokens the coming of Ragnarok if it should be drawn from its scabbard, yet here is being put to use, no mere emblem to mark the end of time but as a true weapon composed along with the armor of the Destroyer for this epic confrontation.

What a moment when Odin the Destroyer finally confronts the assembled fourth Celestial host at their Andean plaza!

They are eight monitors and a towering judge, Arishem, each sheathed fully in a complex armor that looks as if animated not by a living being inside but encasing a whole expanding universe pressurized into illimitable interior depths, portrayed faithfully in Jack Kirby style by artists Keith Pollard and Gene Day. All this is burned in my memory, and maybe deeper in the nether regions where archetypes roam.

I retrieved this story set from the stacks to share, and found auspiciously the collected issues came out hardbound in 2020 in Mighty Thor Marvel Masterworks, Vol. 19. This review previews a new version, making the same kind of revolution at the heart of the story. In the final issues, substitute writers Mark Gruenwald and Ralph Macchio filled in, changing the tone to a second-hand account etched on paper, reflecting the theme of making a story from a story, how we retell repeatedly old tales and plots as in the Nibelungenlied portrayed inside this telling of the confrontation with the Celestials, and in current retellings of this very Celestials story in glossy versions with different writers and artists, roaming ever farther from the brass plates buried alongside the bodies of fallen gods in the Andes whence judgment was passed. Excelsior!