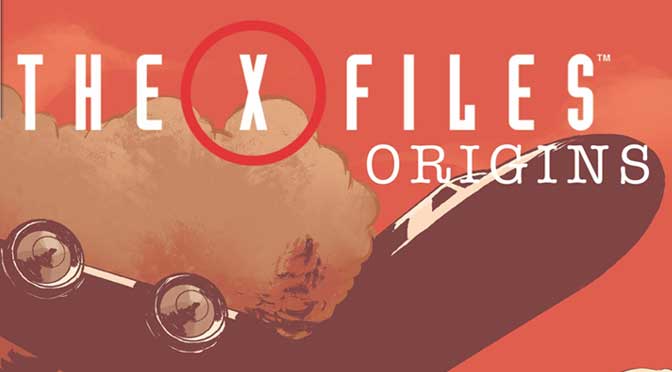 “Dog Days of Summer” is the second iteration of US comic book publisher IDW Publishing’s “The-X Files Origins” series. The title leverages the cult-popularity of the 1990s sci-fi television series X-Files by crafting stories centered around the franchise’s two protagonists, FBI agents Dana Scully and Fox Mulder, but, curiously, during their teenage years.

Like the first “X-Files Origins, Dog Days of Summer”, this issue contains two separate but tangentially connected stories each of which center around one of the two main characters. The pages for each story are physically inverted, so a reader can choose to start with either Scully or Fox’s story and turn the comic around and upside down to read the other one. Inversion is a novel and innovative presentation device, and communicates to a reader that each story is intended to be a mirror for the other even though each story is years apart from the other.

Fox Mulder’s story follows the young man as he saves a hearing impaired teenage girl from being run over by oncoming traffic. Through happenstance (and goading from his two friends), Mulder follows the girl, only to discover that she is mysteriously being drawn towards a naval base in San Diego. Mulder’s story is the weaker of the two. It serves nothing more than a setup to a story that will hopefully be fleshed out in the next issue. Most of the page allotment has been wasted on Mulder’s internal monologue, and the unnecessary dialogue with his two friends, both of which come off as the same type of caricatured portrayals of male teenagers you would expect to find in a Saturday morning cartoon.

Dana Scully’s story follows the young would-be-FBI Agent as she tries to solve a mystery involving a convicted killer who was unexplainably freed from prison and given a new identity as a military pilot. This is linked to a disastrous collision between two military planes involving the pilot. All the while Scully is dealing with the difficulties of having to move, as her father, a high ranking navy official, has been reassigned. There is something a little “Nancy Drew” about the story of a girl detective.

Scully’s half of the story flows a little better and feels more like a sci fi thriller than Mulder’s story. Unfortunately it is hampered by its reliance on prior knowledge of the first “X-Files Origins” miniseries. The comic chooses to set up the underlying mystery by referencing events and characters from the initial series. We assume that the intention is to help provide backstory for the benefit of a new reader, but this has the opposite effect of rendering the plot unnecessarily murky. Rewarding the loyalty (and perhaps encouraging purchase of the back issues) leads to new readers facing the difficulty of digesting a prior plot, which supports the mystery and the reason why Scully (and by extension, the readers) should care about scenario involving the pilot.

Other reviewers disagree with us:

a. Lauren Sisselman at Bleeding Cool concentrates on the dialogue and art, but does not address the plot. She nonetheless rates the title a 9/10, which we think suggests exuberance for the television concept rather than this particular issue.

b. Reviewer Tony Black at Flickering Myth correctly identifies the “Scooby Doo” theme to the Mulder story contained in this issue. Mr Black however applauds the internal monologue as a device to catch-up on the plot from the previous series, something which we regard as lacking in finesse. He concludes, “If the story mechanics can really kick in now and match the strong characterisation of young Mulder & Scully, this sequel could well eclipse its already charming predecessor.” There is an expectation as to a future improvement in plot, and in so far as this implies plot flaws, we concur.

c. Tom Guilfoyle at Outright Geekery says, “The pacing of Mulder’s story is well balanced as there are times the issue needs to slow down from the high-speed action. Jody does this with ease giving an issue that knows where it is going and what time it will get there. There is a tonal shift between Mulder’s and Scully’s stories as Mulder’s is lighter in tone. Thus, it differentiates the stories of the book and highlights their personalities.” But we think Mulder’s story plods, without fulfilling the prerequisite of being creepy. The “tonal shift” in our view is in fact evidence of a weaker story being paired with a stronger, better crafted story. Mr Guilfoyle goes on to note, “The whole issue pacing is great as it runs on a steady beat that allows the issue to flow naturally.” But in our view, the story is as smooth as a bad case of the hiccups. It stops and starts and stops again. It seems poorly thought out, or perhaps instead we are witness to the inexperience of a writer, Jody Hauser, dealing with a periodical publication.

d. Anelise Farris at Rogues Portal observes, “this is the perfect series for a diverse reading audience—no matter your age or level of familiarity with The X-Files, this series offers relevant background information, compelling mysteries, and complex, well-developed characters.” But the characters are well-developed in the television series, and Ms Houser gets the benefit of this remarkable television script writing. In addition, in our view, at this point in the story the mystery is not especially compelling. It is at best nascent.

e. Reviewer River Godbee at The GWW correctly notes a novel point of characterisation: “This Dana Scully has a religious background and set of beliefs that I, for one, did not see coming. It works well for the type of character she becomes in the future.” But this is a singular development within this first issue. To be fair, balanced against the landscape of high quality script writing which we refer to above, Ms Houser has little choice to colour within the lines in respect of plot development. The issue is a precursor to the television series. No character development can occur which does not fit within the paradigm of the television series, as well as fans’ expectations.

In our view, most of the comic fails to capture the foreboding, creepy tone of the franchise. That is the essential drawcard of an “X-Files” title. No amount of name dropping and references to characters in the franchise can save the comic from being nothing but superfluous use of an otherwise popular brand.