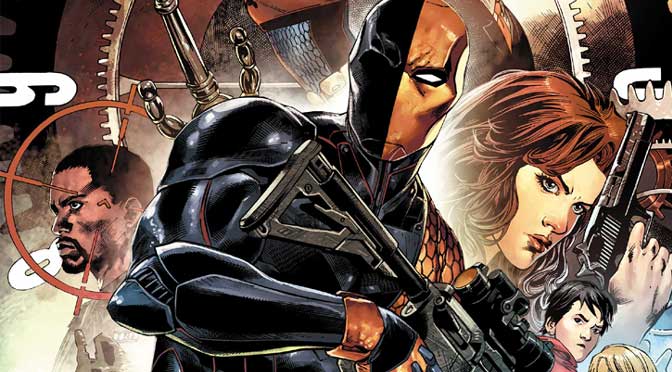 American publisher DC Comics has from time to time published the adventures of an arch-villain, an assassin named “Deathstroke” (originally, “Deathstroke the Terminator”, the epithet pre-dating the first James Cameron-directed “Terminator” motion picture by four years, in 1980).

Colonel Slade Wilson is a mercenary with superpowers – enhanced strength and reflexes. His actions caused his eldest son to have his throat slit rendering him mute (the character later turned up as a forgettable superhero then villain named “Jericho”) and his younger son decided to follow his father into the mercenary business, to his doom. Repulsed by his actions, Wilson’s wife endeavoured to shoot him in the head at point blank range, but Wilson’s super fast reflexes resulted only in the loss of an eye. Deathstroke’s iconic mask, the right hemisphere entirely black, reflects this partial blindness. To paraphrase another character, Deathstroke is so competent at his job that he doesn’t mind conveying the message that his right eye is missing through the symbolism of his mask.

In this first issue by writer Christopher Priest, Deathstroke is on a mission in what looks suspiciously like South Sudan. An aged and apparently terminally ill super villain called Clock King is holed up under the protection of a local warlord. Deathstroke has been commissioned by the families of Clock King’s victims to assassinate him. Deathstroke is distracted from that task by learning this his best friend and long-time butler/handler Wintergreen is nearby.

The story is punctuated by flashbacks to Wilson’s days as a father to his two young sons. The relationships are intensely dysfunctional. Wilson is a vicious bully who mistreats his sons and frequently beats them. There is a strange flashback to a snowball fight but it is hard to tell if this is genuine or some fraying of Wilson’s grip on reality.

The character’s longstanding popularity with fans is difficult to comprehend. The character is tough, resourceful, and determined, but is morally reprehensible with no redeeming features. Mr Priest’s exploration of Deathstroke’s relationships with his sons in this issue shows even less to like. Other popular villains appearing in DC Comics’s titles have likeable qualities. These other characters evoke pity (Deadshot in “Suicide Squad”), humour (Harley Quinn) or style (Catwoman). Deathstroke has none of these things. The character is no less subtle than one of the many bullets that has been lodged in the skulls of his fictional victims. Mr Priest is a fine writer. But even his skills will be hard-pressed to the task of making this character appealing to anyone other than committed fans.