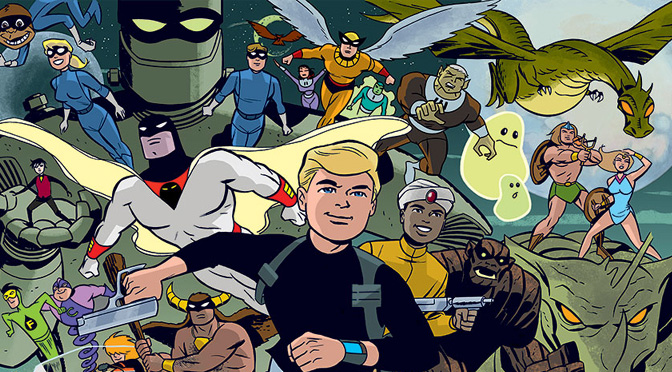 Many children watching television cartoons such as “The Herculoids”, “Mightor” and “Space Ghost” in the early and mid-1970s must have fantasised about the prospect of these characters, and more, interacting within the same continuity. In that regard, writer Jeff Parker is playing in the fields of imagination of tens of thousands of kids across the world in writing this series.

This title is firmly planted in the nostalgia of readers in their 40s. During the late 1960s, Hanna Barbera studios churned out various animated cartoon series. Simple in plot and dialogue, aimed squarely at children of ten or less, these cartoons featured the stylised violence honed in American superhero comic books: energy beams fired from clenched fists, punching leading to harmless unconsciousness, grand destruction with no loss of life.

This comic brings together characters from some of the respective cartoon series and endeavours to intertwine them into one plot. This should be difficult as the various series were either set in contemporary times (“Johnny Quest”, “Birdman”), the distant past (“Mightor”), or in deep space (“Space Ghost”, “The Herculoids”, “Galaxy Trio”). Mr Parker unfortunately deals with this in the cliched ways: interdimensional tunnels bring the characters together and a spot of amnesia hustles them through awkward moments of introduction. But there are some fun moments especially in the second issue: the similarities between Birdman and Space Ghost are given a nod; the animal sidekicks are all lined up in one panel squawking their respective sounds; the front cover features the exotic creatures of the Herculoids framing the rather mundane image of Bandit the dog running with a total lack of self-awareness.

Mr Parker has eschewed the zaniness of the Adult Swim makeovers (Birdman is not “Harvey Birdman: Attorney-at-Law”; Space Ghost is not the TV host of “Space Ghost: Coast to Coast”) and nor does he invoke the recent brooding incarnation of Space Ghost. Instead the characters are depicted as they were in the 1960s. This is where the task of writing becomes very difficult. Characterisation was not a worrisome concern for writers participating in the creation of children’s cartoons in the late 1960s. The adult characters all sound the same – a little righteous and very courageous. In these two issues, much of the dialogue of the adult heroes could be swapped almost seamlessly between the characters. This should please purists as being true to the source material, but can be tiresome otherwise.

And that defines the parameters of the series generally. Some readers will find the series terribly dull and filled with cliches. But others will delight in seeing old friends from their childhood in action.