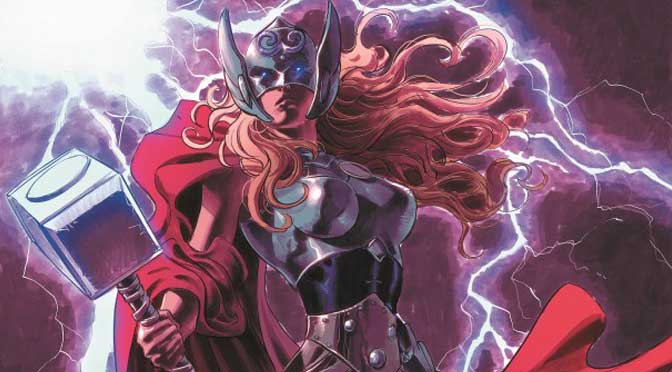 In this controversial series published by Marvel Comics, the role of superhero/the Norse god of thunder, Thor, has been assumed by a woman. That woman is Jane Foster, the male character’s love interest dating back to the character’s creation in 1962. Foster is suffering from cancer. Using the magic hammer of Thor results in the chemotherapy treatment being dispelled and Foster consequentially becoming sicker. Foster ordinarily uses the hammer and is transformed into Thor to save lives or repel threats, and in doing so thus diminishing her own prospects of survival from cancer. We have discussed this remarkable portrait of heroism before.

In this issue, written by Jason Aaron, a group of super-powered aliens called Shi’ar Imperial Guard attack the home of the Norse gods, presently called Asgardia. Usually this assemblage of sentient creatures appears in the pages of Marvel Comics’ title “Uncanny X-Men”. The characters breach the defences of Asgardia, and in the endgame of the obligatory battle, Thor is kidnapped.

But the most compelling aspect of this issue is the four pages of interaction between Foster and Cul Borson, the Asgardian god of fear and warden of Asgardia. Foster serves as the representative of the Earth at an interdimensional senate, and by reason of the effects of chemotherapy she has missed the preceding nine days of senatorial sessions. Cul Borson is not pleased by these absences. The god gloats: “If Midgard must have a voice in these halls, it should at least be a voice not choked on its own pitiful sickness”. 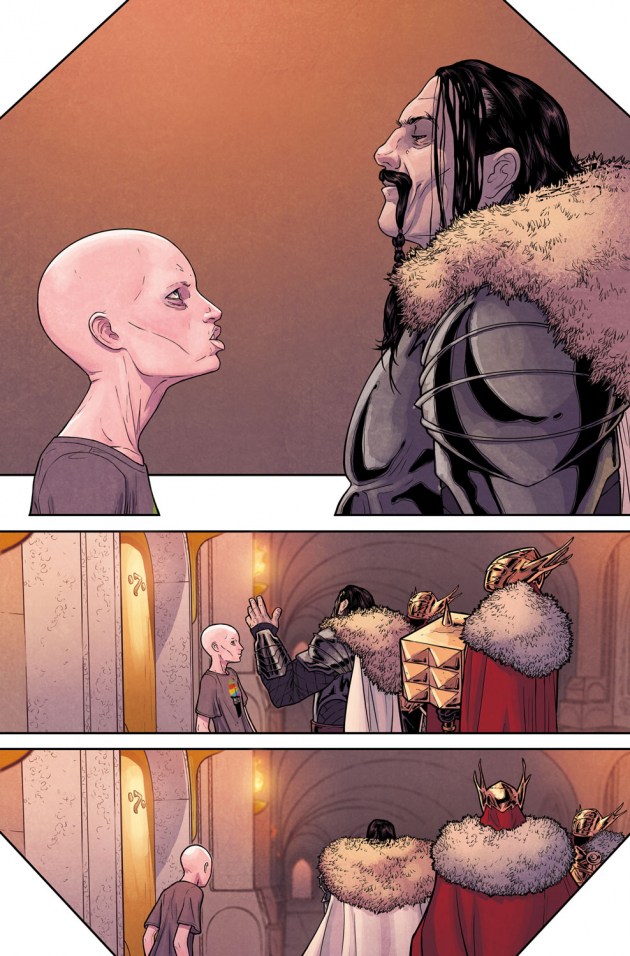 Gods it seems do not suffer from cancer. Cancer sufferers often wrestle with God and His penchant for the arbitrariness and wickedness of the disease. Stephen Fry’s viral comment about his first words to God upon reaching the Pearly Gates – “Bone cancer in children: what’s that about?” is not a unique thought amongst those who cannot see a divine hand in a dreadful disease.

Here, in this issue, a mortal is confronted by a god and told to stop vomiting like a “drunken dwarf” and get over “this pesky cancer” within a week. It seems this particular God requires miracles, rather than bestowing them. The exchange is unique because when cancer patients discuss their illness with God, they do not expect an answer. As it turns out, uncaring gods (at least the ones in Marvel Comics’ pantheon) have no sympathy of cancer’s victims. Mr Fry says in his interview, ““How dare you? How dare you create a world to which there is such misery that is not our fault. It’s not right, it’s utterly, utterly evil…. Why should I respect a capricious, mean-minded, stupid God who creates a world that is so full of injustice and pain. That’s what I would say. ” Cul Borson in the arrogance of immortality and resistance to disease more than adequately fills the role of being mean-minded. The character is easy to detest. In that regard, Mr Aaron does his job well.