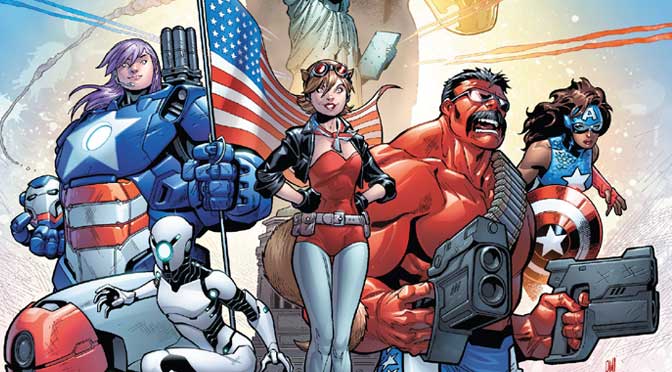 “U.S. Avengers” is a new comic book series from American comic book publisher Marvel Comics. This issue is an introduction to a new superhero team led by wealthy mutant character Roberto Da Costa (the aged, alter ego of the once-teenaged mutant superhero Sunspot), and consisting of a mix of new and old characters cobbled together from past titles such as “New Avengers” and “New Mutants”.

Full appreciation of this new series, or at least this first issue, will depend on how familiar a reader is with Marvel’s extensive and convoluted history. It draws upon characters and concepts that have been established in older comic books. Chief of these is Advanced Idea Mechanics (A.I.M.) – a criminal organization run by brilliant scientists that was bought by Da Costa and repurposed first as “Avengers Idea Mechanics,” and eventually “American Intelligence Mechanics” when it was brought in under the United States government’s umbrella. It is a novel approach to one of Marvel’s longest running go-to evil organizations, but novelty will be completely lost on many readers.

The story in this first issue concerns the “Secret Empire,” which for all intents and purposes fulfills the role that used to be that of A.I.M. – a large organization full of henchmen wearing color-coordinated suits, launching a full scale attack that prioritizes spectacle over efficiency. In this case, the Secret Empire attack U.S. soil using their mobile base, which is, oddly, a volcano situated on top of a Helicarrier. This prompts Da Costa’s U.S. Avengers to intercept and mount a counter attack.

The premise, as cartoonish as it is, works well given that Al Ewing does not hide the fact that the series is not to be taken seriously. Evidence for this includes the mordant overtones present in the dialogue, and the fact that one of the members is the joke character Squirrel Girl (a female mutant who has defeated powerful villains such as Thanos and Doctor Doom… even though her powerset consists mainly of the ability to control squirrels.)

What really brings “U.S. Avengers” down however is the futile attempt to tell a story while trying to squeeze in introductions for all the main characters. As mentioned above, many of the main characters are refugees from other comic books and have substantial backstories, or are new characters that were spun off existing franchises and thus require further explanation.

The first issue of this title tries to fit both a story and solid character work by presenting the character introductions as a shoot for a documentary, in which Da Costa and the members of the U.S. Avengers talk about themselves and their backstories in front of a camera. What might otherwise be a novel approach comes off as tacky and not a good use of the medium. It is also unnecessary: there was no need to introduce all of the characters in the first issue in such an uncreative and straightforward manner, when those panels could have been used to slap a little more paint onto the canvas. As it turns out, there are only a few dozen panels of the Secret Empire’s attack, and the rest are wasted on panels of talking heads.

Despite the unique concept and the brand recall inherent in the “Avengers” name, this first issue is burdened by jumpy transitions, an ineffective approach to character introductions, and a genuine lack of any interesting element. It is disappointing.