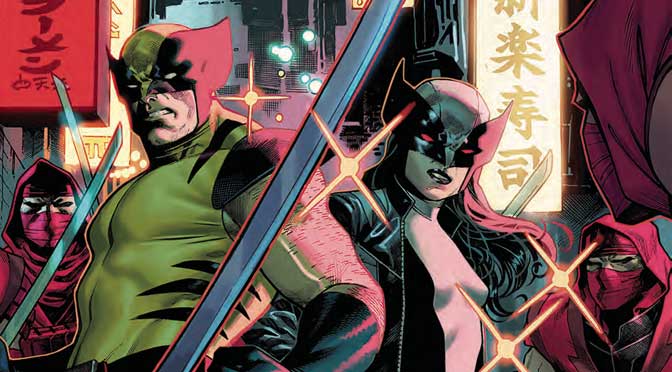 The “Generations” brand is American publisher Marvel Comics’ line of single publications that leverage both classic and modern iterations of characters from the publisher’s rich catalog of superhero properties. As the title denotes, “Generations: Wolverine & All-New Wolverine” features both the original version of Marvel’s popular adamantium-clawed mutant superhero, Logan, and his female clone Laura (which in recent years has taken over the “Wolverine” mantle), within a single story.

The story is set in the past, during one of Logan’s many visits to Japan. The action starts early, with Logan fighting a group of undead ninjas from The Hand (a large and mercenary organisation of ninjas that meddle in the occult arts). This violent melee resulted from the kidnapping of Logan’s Japanese daughter, Akiko, by what is presumably The Hand and whoever is pulling their strings.

It is worth noting that Logan seems a little bit out of character in the early part of this fight sequence. Logan is shown to have realised the futility of fighting a never-ending amount of undead ninjas, at one point even contemplating the option of just giving up and resigning himself to death. This is a particularly odd mischaracterisation because not only has Logan been previously depicted as an extremely determined and savage fighter at this point in his life (the character’s personality, and his cellular regenerative mutant super-power, is entirely orientated around survival), he is also a parent fighting for the sake of his daughter. As out-of-the-box solutions go, this one is bizarre.

The defeatist mentality might be grossly out-of-character for Logan, but it does serve its purpose as the perfect point for Laura to appear and save her future mentor/father figure. Statistically, a character in an American superhero comic book is more likely to engage in time travel than catch a bus. The vehicle of time travel is necessary because within Marvel Comics’ current continuity, Logan is dead and his role has been assumed by Laura.

The battle expands to include Laura. This fight will satisfy any Wolverine fan who wants the stock-in-trade action scene, and also defines the main differences in both abilities and fighting style between Laura and Logan.

With Laura’s help, Logan finally succeeds in hunting down The Hand’s current client. This is long-time nemesis Sabretooth, who has abducted Akiko as a way of getting to Logan. Sabretooth and Logan have a relationship which sometimes strongly resembles homosexual heartbreak. The two characters were depicted as best friends and fellow soldiers for decades before falling out, leading to an implacable hatred. Both characters have repeatedly demonstrated no qualms in efforts to mutilate and kill each other.

The story climaxes in Laura sacrificing herself by throwing both herself and Sabretooth out of a high altitude plane, so that Logan can safely escort Akiko back to her home. Of course, the word “sacrifice” is used loosely here, given that both Laura and Sabretooth can survive falls from a great height due to their mutant abilities (fantastically accelerated healing and in Laura’s case, unbreakable adamantium-laced skeleton. Logan, who shares this ability, has previously been shown to have survived a fall from low orbit. A drop from a plane is temporarily debilitating at best.) Logan then returns and saves Laura from Sabretooth.

The denouement lacks the adrenaline-soaked urgency of the rest of the story. But it provides the most amount of actual story—Laura convinces Logan to spend some time with his daughter instead of disappearing without any notice as he always does. This, coupled with Logan’s highly sensitive sense of smell, allows the veteran mutant to finally deduce who Laura is, although the comic does not make it clear whether he thinks she is his daughter from the future or a clone. Either way, the distinction is rendered moot by Laura addressing Logan as her father, before vanishing back to the future.

As expected of any single publication, the story is fairly thin. The target market here is clearly the large group of fans of the Wolverine brand. The thematic iteration, aimed squarely at those fans, is as to how a (relatively) younger Logan will interact with an older, wiser Laura. This is in direct contrast with the first set of interactions between the two characters, where an older, wiser Logan meets Laura while she is still young, temperamental and easily consumed by her emotions.

Given the low creative expectations set by the “Generations” line of comic books – the entire, very superficial premise of this series is the novelty of the interaction of characters who share the same name and costume – we are reluctant to severely castigate the relatively threadbare content. In fact, the bar is otherwise so low that we consider this one of the better-written Generations oneshots. The only significant complaint we have outside of characterisation is that the writer, Tom Taylor, could have spent a few pages fleshing out the context as to why the two Wolverines from different time periods are meeting. Mr Taylor is an experienced writer, but he entirely fails to provide any answer to this question: Why has Laura braved time travel to meet this youthful version of Logan? The usual text summary located on the first page is of no help here. In other Marvel publications, this space is usually used to great effect in keeping readers up-to-date on the events that led to the current issue. Here, it only provides unnecessary introductions (it is a safe bet that people picking up this comic are already familiar with the two main characters). It is possible that the catalyst for the Generations crossovers are explained in some other comic. That would explain Mr Taylor’s apparent oversight – editorial intervention has stripped this from the story in order to compel readers to buy the related titles to learn the answer. But, as our regular readers would know, we believe a one shot comic book should not rely on other comics to provide context. We very naively believe that precision in story-telling should not be sacrificed in the altar of cross-promotion.