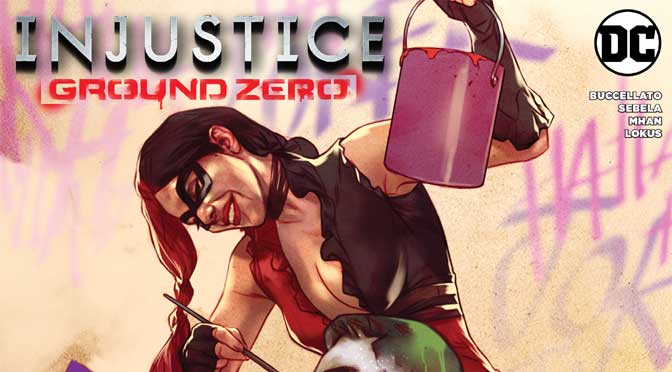 In the spring of 2013, the Interactive Entertainment division of Warner Bros. (which owns DC Comics) and videogame developer NetherRealm Studios jointly developed and published a 3D Fighting-genre video game titled “Injustice: Gods Among Us” for a variety of hardware platforms. The game pits DC Comics’ most popular characters against each other in a series of one-on-one fights, using the backstory of an alternate timeline in which DC Comics’ paramount character property, Superman, has built a totalitarian government and put the entire planet under its control, while a small insurgent group consisting of other heroes, led by DC Comics’ other paramount character property, Batman, mount opposition.

While the video game was thin in terms of storytelling (as expected of a Fighting-genre videogame), DC Comics released an “Injustice: Gods Among Us” comic book series that serves as a prequel. The comic book series was fairly substantial, with the final chapter being released on September 2016, long after most gamers lost interest in the video game. With such a hefty back read, this comic book prequel can be inaccessible to a new reader, and will be an incomplete read to someone who is not interested in picking up and playing the video game (as the video game technically serves as the conclusion to the story.)

Fortunately, “Injustice: Ground Zero”, which was started in December 2016 as a way of proactively building momentum for the videogame sequel (not to mention further expansion of the “Harley Quinn” character brand following its entrance into mainstream awareness upon the release of the “Suicide Squad” motion picture in 2016), supplants both the prequel and the original video game. This is a new doorway into the “Injustice: Gods Among Us” franchise without going through all the trouble of backreading almost half-a-decade’s worth of comics and playing through a fairly niche videogame.

The “Injustice: Ground Zero” miniseries retells the entire story from the (warped) perspective of Harley Quinn. Harley Quinn is a character property created as a sidekick to Batman’s adversary The Joker for animated cartoons in 1992. The prequel is condensed to a few pages’ worth of flashbacks and monologues, while the game’s story is retold through the character’s recollection of events, in a conversation with a mysterious figure on a park bench. It retraces narrative steps, as it goes through the trouble of keeping readers up to date on what occurred in the games and the comic book prequel. But its main draw is to show the perspective of Harley Quinn, who is depicted in “Injustice: Gods Amongst US” as having joined Batman’s Insurgents but was kept on a short leash (partly out of Batman’s distrust for his nemesis’ mentally unstable sidekick, and partly out of concern as to what Superman might do to her in the event of capture.)

It is easy for the reader to consider Harley Quinn as an unreliable narrator and to dismiss her recollection of events as heavily modified, given her mental state. But if the reader is prepared to enter into the exhaustive transaction of cross-referencing the monologue with the game and the prequel, then it is clear that she is at the very least not changing important plot points. The most interesting part of the series is it does a great job of fleshing out the character and giving readers an insight on her psyche, as well as her relationship with The Joker. In a way, this miniseries is primarily a Harley Quinn story, that just so happens to occur right alongside the “Injustice: Gods Among Us” story.

One notable takeaway from the series is that it doesn’t overly romanticize Harley Quinn’s relationship with the Joker, a voguish and distasteful evolution given The Joker is a serial killer and occasional torturer. In “Injustice: Ground Zero”, The Joker’s absence (after being murdered by Superman) had a positive effect on Harley Quinn. The character took over the villain’s surviving henchmen and transformed these street thugs and criminals into revolutionary freedom fighters. The henchmen themselves are written to consider that their lives have undergone a massive improvement and resisted the idea of a returning Joker leading them again (unbeknownst to the henchmen, this version of the Joker is the character from DC Comics’ mainstream continuity, having crossed over as part of “Injustice: Gods Among Us”’ main plot. These sorts of exercises are designed to increase sales but have the collateral detriment of sowing utter confusion amongst new readers). The sentiment is shared by Harley Quinn’s only real friend, Poison Ivy (another villain from the continuity of Batman), who refuses to join any side of the war, but helped Harley Quinn after finding out that Harley has plans to finally get rid of The Joker.

In the most recent issue (#14), Harley Quinn gave in and chose to help this new Joker escape incarceration. Is the character not really in love but instead suffering from Stockholm Syndrome? This is upheld by the way The Joker treats her – more of a pet or a possession than an actual partner. In fact, the Joker goes out of his way to demean Harley and constantly reminds her that she is worthless without him. There is nothing positive out of this abusive relationship. We hope that future issues allow the Harley Quinn character to redeem herself instead of just preserving the status quo. Given that this is technically an out-of-continuity series, it shouldn’t be too disruptive to the brand even if DC Comics really wants to market the Joker and Harley Quinn as being in an authentic romantic relationship, or allow Harley Quinn to kill or incapacitate her master.

So far, “Injustice: Ground Zero” is a recommended read, even detached from the video game. It does a serviceable job of both providing a backstory to the game, and as a Harley Quinn story. As a bonus, it lets you forego years one to five of the “Injustice: Gods Among Us” series and jump straight into the upcoming 2017 video game sequel. Comic books that support video game sales do not usually exhibit quality in the elements of writing. This title is an exception.