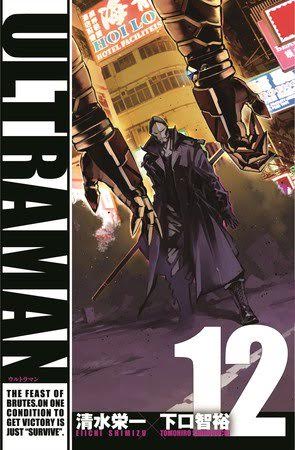 Ultraman is a manga written by Eiichi Shimizu and drawn by Tomohiro Shimoguchi. Published in Monthly Hero’s since the magazine’s inaugural issue in October 2011, it is a manga sequel of the very popular 1966 Ultraman television series.

Ultraman has had remarkable longevity, for a concept which started off in what we would now regard as a kitsch television show over fifty years ago. The premise of Ultraman is that the main character can transform from a human into a red and silver, monster-battling titan which is forty metres tall, weighs 35000 tonnes, and can shoot death rays from his wrists. Ultraman is quintessentially Japanese. In 2009, Chinese premier Wen Jiabao complained publicly that his grandchildren spent too much time watching Ultraman instead of domestic television programming, and this in turn led to Chinese boycotts of the series. And as explained by the Japan Times in 2016, Ultraman was the genesis of kaiju: giant monsters which frequent Japanese manga and anime (and for which we have a specific category).

Ultraman has been the subject of a long running legal stouch between Tsuburaya, the Japanese owner of the concept, and Thai company Chaiyo Productions over international distribution rights. This has led to related to a dispute in the Beijing courts about a Thai-Chinese series called PROJECT ULTRAMAN. It is entirely possible that this long-standing litigation inhibited the success of the character in other foreign markets.

Viz Media publishes the Ultraman manga in North America, and it describes the story as follows:

Decades ago, a being known as the Giant of Light joined Shin Hayata of the Scientific Special Search Party to save Earth from an invasion of terrifying monsters known as Kaiju. Now, many years later, those dark days are fading into memory, and the world is at peace. But in the shadows a new threat is growing, a danger that can only be faced by a new kind of hero – a new kind of Ultraman…

Shinjiro is an ordinary teenager, but his father is the legendary Shin Hayata. When he learns that his father passed on the “Ultraman Factor” to him, and that he possesses incredible powers, nothing will ever be the same again.

Thus, the creators tie the manga back to the original television series, paying homage to its concepts in order to win the affection of diehard Ultraman fans.

The manga has some very striking visuals and is clearly a step up in terms of sophistication:

In the twelfth volume of the Ultraman manga, published in July 2018, it was announced that the manga’s anime adaptation will premiere on Netflix in spring 2019. The anime will have a worldwide simultaneous release.