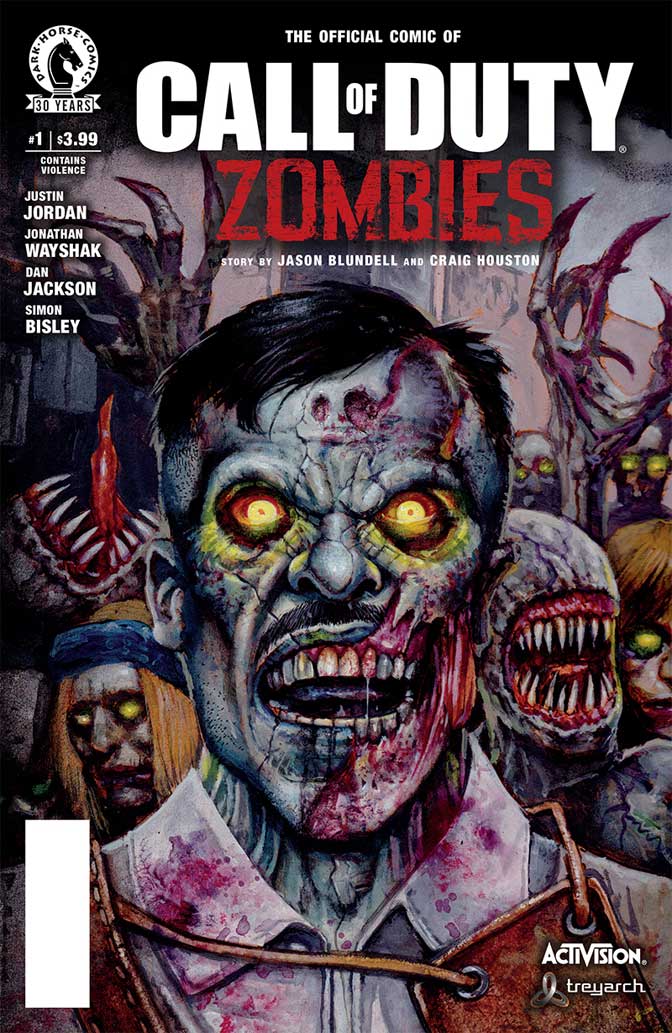 Sometimes we think our task in writing these reviews is akin to being a restaurant reviewer. This time, we have opted for fast food.

Knowing only the title and the premise, a discerning comic book reader would have an exceptionally low bar if he or she had any expectations of quality arising from this comic. Video game adaptations have the (rightfully deserved) reputation of being nothing but supplementary marketing materials targeted towards existing fans of the games, with the knock-on effect of being too inaccessible to new readers. Mix in the well-worn and saturated zombie horror genre, the natural and reasonable assumption of this reviewer is that the pages of “Call of Duty: Zombies” would leave us with the same feeling as having stuffed our faces with a bucket of fried chicken – slightly unwell laced with a sense of guilt arising from the overindulgence.

Fortunately, and surprisingly, there is value to be found in this new mini-series. It is not a particularly deep story – and the first issue makes it seem like there is actually very little plot or backdrop outside of a group of combat-talented individuals who happened to meet while trying to survive a zombie apocalypse.

Barring the initial slow setup, the comic does attempt to flesh out the characters. It is a hard task. Inevitably these characters are two dimensional in being beholden to stereotypes, as expected of action videogame characters.

But writer Justin Jordan goes to Herculean efforts to create character interaction between these different survivors. First, the female survivor Misty is sassy and charismatic. Second, the veteran Russman refers to himself in the third person, as an indicia of mental instability. Third, the nerdy scientist Marlton, and fourth, the elderly former soldier Stuhlinger, who is telepathically linked to a mysterious entity that guides all four of them for ambiguous reasons. All four of these characters tend to be self-serving and grate on each other (and perhaps the reader).

However the story is not aimed to inspire sympathy for these characters. The main draw of the story is the events that led to an apocalyptic version of Earth infested by zombies, as well as the mystery behind the mysterious voice guiding the survivors. Peppered throughout are enough details and plot differentiators that help the story from devolving into a bland zombie yarn. These include the use of zombies that have evolved intelligence, genetically enhanced monsters with regenerative abilities, and elements of interdimensional travel. It may read like Mr Jordan is an amateur chef, desperate, throwing everything into the pot. But the four issues so far do a great job of tying all of these disparate elements together into a single coherent story.

By way of analogy, you do not go to Sizzler and expect haute cuisine. But sometimes the menu can hold tasty surprises. “Call of Duty: Zombies” is one of the very rare occasions where a videogame comic adaptation is actually accessible even to readers who have never played a single video game. Like the videogame franchise “Call of Duty: Zombies” is not something to turn to if expecting masterful storytelling. But it is in our view likely to be enjoyed by readers not seeking cordon bleu.