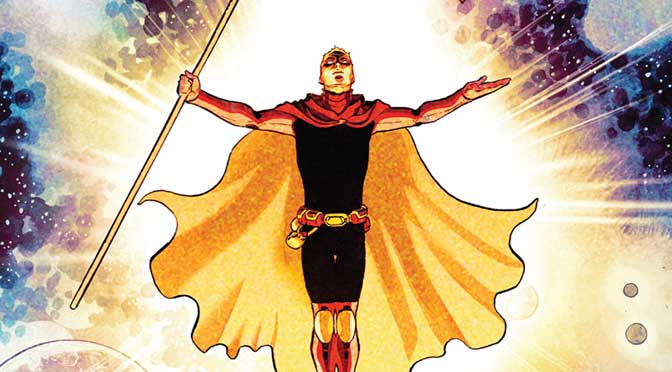 Infinity Countdown: Adam Warlock is a new single-issue superhero-genre publication from American comic book publisher Marvel Comics. It is intended to kick off the “Infinity Countdown” publisher-wide crossover event, an annual exercise in commercial cynicism in which the reader must buy multiple Marvel Comics titles in order to understand the entire story.

This particular crossover event concerns the Infinity Stones. These are cosmic artifacts that individually control different aspects of the universe. When used together, the stones grant the bearer the power of a god.

Right off the bat, the problem with the Infinity Countdown event itself is that it is intended to ride on the hype being built around the upcoming cinematic film, Avengers: Infinity War, where the motion picture version of the artifacts are the driver to the quest-type plot.

The story starts with the character with the stupifying name Adam Warlock. This character is a golden-skinned synthetic human designed to be the perfect living being. In the event of death, the character can come back to life and evolve through a vague regeneration process that involves a golden cocoon. The latest rebirth of the character within this title takes him to the far future, straight into a confrontation with the time-traveling super villain Kang.

It is revealed that the future Adam Warlock woke up to is the end of time, with the earth already destroyed by a still-unrevealed villain. All of its heroes are dead. Adam Warlock believes that he is time-displaced, but Kang reveals that the hero was merely hibernating for a very long time. The even bigger reveal is that it is no less than the 113th time they have met, with their previous interactions involving Adam Warlock’s efforts to stop the apocalyptic event from happening, each time ending in failure. But this time around, Kang decides to send Adam Warlock back to the distant past, where he is to be helped by an Egyptian king (who will eventually become Kang) into finding two of the Infinity Stones. It is a jolting plot.

Author Gerry Duggan manages to put in a solid effort in this comic, despite the clear limitations of the story. In addition to the inescapable conclusion that Marvel Comics has already bled the concept of the Infinity Stones dry, Infinity Countdown also involves time travel and the death of the Marvel universe. It is a very unwieldy, worn concept that would be silly and impenetrable in the hands of less-seasoned writers. In Mr Duggan’s capable hands, we only need to worry about the inherent impenetrability.

Mr Duggan wasted no time in restricting the time travel element of the story. Both Adam Warlock and Kang know that they cannot randomly meddle with events, out of fear of ruining history. HG Wells wrote the first English language science fiction time travel story, called The Time Machine, in 1895, but it was not until Ray Bradbury wrote the short story A Sound of Thunder in 1952 was there any fictional consideration of the consequences of disruption to history by reason of time travel. Like most of Mr Bradbury stories, there is a very dark edge to it. This story is thought to have given birth to the idea of the “butterfly effect”. In A Sound of Thunder, there is a consequence of messing with the past: a person who does this faces death, and that is what happens in the story when a time-travelling dinosaur hunter steps off a path and crushes a butterfly. Upon returning home, the time travellers discover that the English language has changed into a purely phonetic form and that a different person has won the presidency of the United States. The hunter is shot dead by the tour guide.

Poul Anderson also has his Time Patrol, which destroys rogue fictional realities (a series of novels running from 1955 to 1995). From the book The Alternate History: Refiguring Historical Time:

This extract also mentions Asimov’s The End of Eternity, from 1955, in the context of the past altering the future but in that case, to create a flawed utopia.

Other American comic book titles deal with this concept, notably Gerard Way’s The Umbrella Academy (2008) which requires its cast to facilitate and execute upon the death of John F. Kennedy in order to preserve history. Another of Marvel Comics’ superhero titles, Cable, also seems to feature this idea of the past being mutable of late. A forthcoming review of Image Comics’ Rocket Girl will further examine the issue of time travel as a plot device.

Within this title, despite Mr Duggan’s best efforts, the solution to the conundrum of the past affecting the future is both mystifying and horribly cruel for Adam Warlock. The character is fatally stabbed by Kang and entombed so that he can hibernate, recover, and wake up in the future instead of traveling through time. This is apparently a much safer method of travelling to the future than time travel, because it does not meddle with the timestream, and because it is discreet and therefore cannot be detected by the story’s actual, hidden villain. We find this very confusing. If Adam Warlock’s conveyance to the past did not interfere with history, then how would his return to the future interfere with history?

Our assessment is somewhat bleak. Infinity Countdown: Adam Warlock is little more than a plot springboard designed to set up the events with an arcane time travel storyline, establish Adam Warlock as one of the principal characters of the forthcoming event, tease the crossover’s main villain, and serve as a refresher for people who are not familiar with Adam Warlock’s comic book history. But Mr Duggan’s skills do shine through. Regardless of the inaccessibility and time travel muddle inherent in the storyline, Infinity Countdown: Adam Warlock does contain solid writing. It is readable for those interested in the crossover event that it heralds.