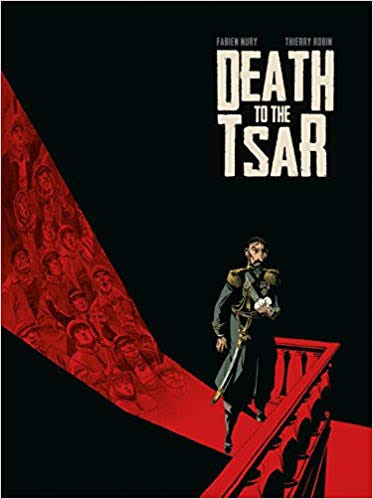 The Tsar and his rats

In 1903 the starving people of Russia staged a series of protests against the regime of the Tsar of Russia. The Tsar and his family, the Romanov dynasty, were fabulously wealthy. (Perhaps the item most famously associated with the Romanovs were the incredibly detailed, bejewelled and gold encrusted eggs which the Romanovs collected, manufactured by a French artisan, Faberge.)

The Russian government was an autocratic state which did not tolerate dissent. Peaceful marches were met with gunfire. The Tsar’s secret police, the Okhrana, were everywhere as were their informants (called “rats” by the revolutionaries). There was little division between the aristocracy and the military. An counterintuitive fact about the Romanov Imperial Family is that Tsar Nicholas II was a nephew of Queen Victoria of Great Britain, yet the Tsar had no sympathy with any of the British democratic principles espoused by Victoria and her successors.

An imperial absence of human empathy is well illustrated within this comic. The repeated massacres by the nonchalant Tsar of peaceful men, women, children, and priests carrying the Russian Orthodox cross is repeatedly depicted in this comic in horrifying detail.

The comic is divided into two segments. The first of these chapters, entitled “The Governor”, deals with the Governor of Moscow, Grand Duke Sergei Alexandrovich, the uncle of the Tsar.

Aside from being cruelly anti-Semitic, Sergei is portrayed in a very sympathetic light. He genuinely loves his daughter and is as sorry as he can be to the plight of the people. A homosexual born into the wrong family and into the wrong age, Sergei is horrified to accidentally cause a massacre of protestors – including children – when his soldiers misinterpret his signal to fire, a wave of his handkerchief.

Sergei visits the wounded in hospital, and when he wipes his brow with his handkerchief, the wounded beg for mercy. Mr Dury captures well the absurd power of life of death which Sergei wields with the wave of a cloth.

Death be not proud

A failed assassination attempt brings Sergei to the conclusion that he die. Sergei talks to his elderly gardener about this imminent demise:

Sergei: “It appears I’m going to be killed, Igor. Because of the working class. What do you think? You think they’ll kill me?”

And then in a conversation with his cook, who has been identified as having populist sympathies:

Sergei: “Do you wish my death as well? But why?”

Cook: “It’s your fault. You let the stoves go out.”

Sergei: “You want to talk about the famine? It only lasted three weeks. And… it has nothing to do with me. It’s because of the war, and those damned Japanese.”

Here is the issue: Sergei thinks of the big picture, of the armed territorial dispute which was the Russo-Japanese War of 1904-5. But the cook thinks only of keeping the stove alight. The division between statesmen and workers is stark. Sergei then reads a police report which demonstrates that the cause of the riot which lead to the deaths of the forty-seven people at the fall of his handkerchief was a woman who was taken away after being driven to madness by her cold stove. There is no social contract between the rulers and the ruled. Sergei’s stableman is revealed to have frozen to death in the street.

History tells us that the loss in the Russo-Japanese War weakened the institution of government in Russia, and that the German government during World War One conveyed Lenin back to Russia in the hope of causing destabilisation – a task Lenin was able to notoriously achieve. But the doom of the Romanovs was both caused and foreshadowed by the very ecosystem of their existence: one of privilege while those around but beneath them suffered and died.

Sergei reads his mail. Most of the letters are from citizens who are angered by the massacre, who write as if Sergei’s death is a forgone conclusion. Some are apologetic, some respectful, and some recognise Sergei as “an honest man.” One letter simply reads, “Child killer.”

When his wife’s lawyer arrives to talk about his will, and his daughter asks over breakfast whether or not he will die, Sergei travels to St Petersburg to obtain the Tsar’s permission to leave the country. The Tsar refuses. Sergei resigns as governor of Moscow. The Tsar says, “Very good. I accept your resignation. But I really don’t see the point. You’ll still be commander of the Moscow Military District. And still my uncle.” The Tsar then guides Sergei onto a balcony, to witness a protest of 25000 people – an event known in Russian history as Red Sunday. The Tsar borrows Sergei’s handkerchief, and the protestors are all massacred by gunshot and cannon fire.

There is a point at which Sergei struggles between not wanting to be a victim of destiny – “I am not Agamemnon!” – and forming the view that his death is deserved. He cleans up his affairs, including his will, and confesses to his daughter Ziza that he is not really her father. “I love you more than anything, and you can always call me father. That would make me happy. I just don’t want to lie to you anymore.”

Sergei is a chess piece, and he has decided that he will be removed from the board. Sergei empties his office, ensures the renovations to the Russian Orthodox cathedral are well-underway, and drives about Moscow in an open carriage. Only once does he glance back, when Ziza says, “See you tonight, Father.”

A man whose name is later revealed as “Vania” endeavoured to assassinate Sergei at the threatre, and only stayed his hand because Sergei was accompanied by Ziza. This second time, throwing a bomb in the street at Sergei’s carriage, Vania is successful.

Mr Nury does a masterful job of characterisation. Sergei’s prejudice against Jews and foreigners were miserable. Sergei, a man of destiny by virtue of being a Romanov, was too weak both in character and influence to alleviate both his predicament and that of the people of Moscow. Yet he is successfully portrayed to us as a likeable man, and we regret his death when we read it.

Chapter Two, the second segment, is called “The Terrorist”. The audience is conveyed a back to 4 December 1904, before Sergei’s assassination. This chapter is devoted to the planning involved in killing Sergei. It is meticulous, secret work. The primary character in this chapter is a revolutionary cell leader, Boris Aznikov, also known as Georgi. We are introduced to Georgi in the first chapter when Sergei reads a police report on Georgi’s colourful and dangerous background.

On 4 December a man named Fiodor made an unsuccessful assassination attempt upon Sergei. Georgi walks out the route of Fiodor’s attempted escape and death, the antithesis of a detective – he knows the name of the anonymous assassin, and seeks to determine why the crime failed. Georgi then makes his rounds: Andrei, his superior from St Petersburg who supplies him with money (later revealed as a “rat”); the veteran who lost his legs to a Japanese shell and who supplies nitroglycerin; and then he visits his cell.

The first is Erna, ostensibly an actress, is actually a bomb maker. Her father is “the one who crafted the bomb that killed Tsar Alexander II in ‘81.” We then realise that hatred of the Romanovs and their rule is a generational thing. Georgi and Erna have sex, and are walked in on by Heinrich carrying flowers. Georgi observes, “Heinrich. He loves Erna. Erna loves me. I don’t love anyone.” Georgi is a ruthless man, devoid of emotion. Later, he mets an Okhrana spy on the train. “Beautiful woman,” he later says to Erna. “I slept with her, and then I killed her.” He then stalks the streets of St Petersburg, a restless tiger in a cage.

Georgi witnesses Red Sunday and only gets away by way of a fake English passport. Georgi favourably compares Sergei to the Tsar. “It doesn’t matter. The governor must die. The reason is simple and has nothing to do with him. I’ve got nothing better to do.”

And later, when he learns that Vania failed to kill Sergei the first time because of Ziza’s presence, “The Governor is a brave man. Still, he will die.” Later still, when Andrei tells him to stand down because the Tsar has decided to try an experiment in democracy:

Andrei: “Georgi, please, be reasonable. He’s resigning. He’s not even the governor anymore.

Georgi is driven to kill the governor because Georgi is what he is. There is no real political agenda to his motives. As Sergei’s spymaster notes of Georgi, “He would have worked wonders in our department.”

Georgi escapes from a vicious shoot-out with police – “Ten minutes of pure bliss. I finally felt at home” – after Sergei’s assassination, and realises that Heinrich will lead Georgi to Erna. Georgi casually shoots Heinrich in the forehead, and is assisted to escape from the shoot-out by “the last Jew in Moscow.”

When Georgi escapes Russia at the end of the story and lives in quiet Geneva, he is a tiger released from a cage. Georgi cannot cope with freedom, and hangs himself.

Georgi and Vania have a very tense relationship. The two get into an argument about the morality of killing children. Vania gives us an insight into his motivation. He wishes to be a martyr: “[Y]ou have to die at the same time as your target. You sacrifice not only your life, but your very soul.” When Vania kills Sergei, he is captured and tortured as a martyr. But Sergei’s wife visits him and forgives him: she says she will seek his life to be spared. Vania is horrified. The death he seeks to not granted to him. “You don’t deserve to be a martyr.” Shattered, Vania spills his secrets.

The motif of the handkerchief is played out when Sergei’s wife is on the scene of the bombing. She is trying to collect the scraps of Sergei’s obliterated body, picking up a ringed finger. Georgi is there and helps her. He gives her Sergei’s handkerchief. It is splattered in blood. Finally, the figurative has given way to the literal.

The reader is left wondering: if Georgi was supplied money by the Okhrana, by way of the rat Andrei, then who actually was behind Sergei’s assassination? And what happened to Sergei’s wife after the revolution? Did little Ziza survive? We ask these things because we are caused to like the characters and be concerned with their fate.

But the story has its symmetrical ending: both Sergei and Georgi are killed by Georgi, and for reasons neither of them fully comprehend. In the case of Sergei, his pending death was obvious to everyone, but he failed to comprehend a way by which he could stop it. Even we do not know who was ultimately responsible. By the end, Sergei believed he could bring his death about neatly and cleanly. Sergei’s severed finger lying on the cobblestones of Moscow was the exclamation point to his last weeks of fretful purgatory.

Mr Nury is a truly remarkable writer. This comic is as intricate and as well-crafted as a Faberge egg.