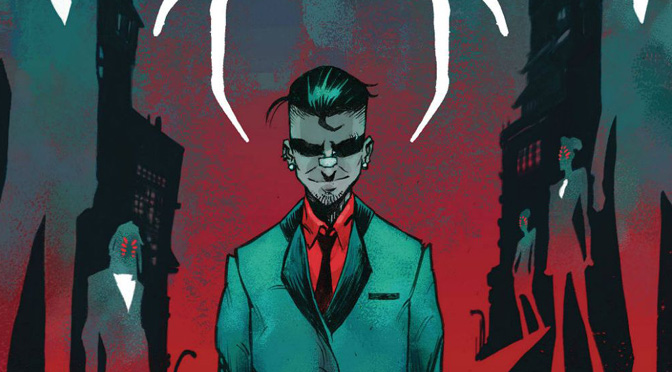 The cover to the first issue of Simon Spurrier’s “Weavers” makes it easy to discern the premise of the comic book. It features a man dressed like the typical modern gangster, surrounded by silhouettes of similarly-dressed people with arachnid-like eyes. The spiders are not symbolic. The comic is about gangsters and spiders. A key issue in the premise of the story is the kind of spiders, and what role they play in the story.

The story explores the tribal nature of criminal culture. The first few pages of the comic introduces the character on the cover, a fidgety novice in a gang made up of well-dressed men and women. These people, as the succeeding pages reveal, also exhibit different kinds of powers stemming from alien-like appendages. The fidgety novice hesitates to kill a rival gang member, and, true to how criminal gangs react and echoing a bloody plot pivot in the movie “Reservoir Dogs”, immediately becomes subject to suspicions of being a mole.

While the mysterious arachnid/alien-like appendages do play a big part in the identity of the comic book, “Weavers” is at its heart a gangster story. This would be a less striking yarn if the spiders and the powers were removed, but there is still an engaging story about a powerful gang and the new recruit whose identity and motive have yet to be revealed.

The new recruit is named Sid Thyme. This is a character whose clumsiness and anxiety play well into making the reader wonder whether he is simply being overwhelmed by his new world, or whether he is an undercover cop who may have bitten off more than he can chew.

The character was an unlucky (or lucky, depending on the point of view) recipient of the powers of a female member of the gang, who was killed in an explosion in an unnamed bar. It seems that the powers (or bugs) in “Weavers” work similarly to the power rings in “Green Lantern” franchise owned by DC Comics where the death of an existing owner will cause the bug to look for the nearest replacement deemed worthy. Thyme was the recipient of the bug previously linked to the murdered criminal.

The dead gang member is revealed as the sister of the Weavers’ leader, named Don Harvest. Harvest is as physically imposing as he is short-tempered, and Thyme withers in his focus. To make matters worse, the dead sister was also one of the most effective members of the gang. This means Thyme has to prove that he is not a mole, while at the same time living up to the expectations set by his predecessor.

In the climax of the first issue, it is revealed that Thyme is being tested by Harvest, first, through his reaction after finding out that an informant they are interrogating is an undercover cop, and, second, whether he is willing to kill the captured cop as a gesture of commitment.

“Weavers” is the vehicle for an interesting, albeit straightforward gangster story in this first issue. There is nothing new being offered genre-wise: the premise of a new recruit who may or may not be a cop has been tackled by countless other gangster stories across various mediums.

Fortunately, the bugs provide a refreshing twist to the familiar formula. Further, the writer, Simon Spurrier has added hints that there may be more turmoil and tension hidden under the surface, both in terms of the bugs that grant powers, and the loyalties of key players from within the Weavers. Mr Spurrier’s labors on this title going forward are worth following.