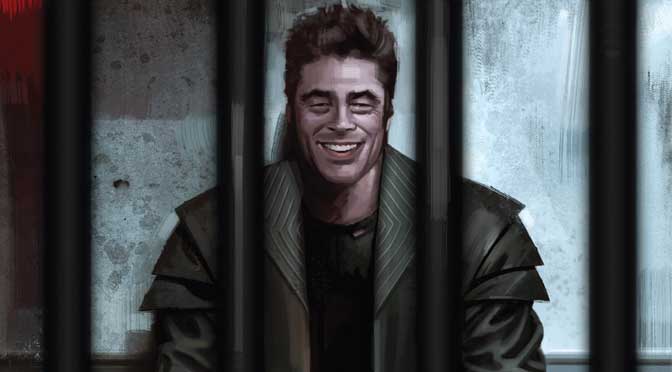 Star Wars: DJ – Most Wanted is a single issue spin-off comic published by American publisher Marvel Comics, built upon the colossal pop culture foundations of Disney/LucasFilm’s science fiction franchise, Star Wars. For the most part. Star Wars focuses on the adventures of an elite group of warriors called the Jedi Knights, who wield laser swords called lightsabers. But this title, notably, revolves around a character that featured prominently in the most recent film, Star Wars: The Last Jedi , named DJ (an acronym for “Don’t Join”.)

Played by actor Benicio Del Toro, DJ is a human male slicer (in Star Wars nomenclature, a “slicer” is an individual who breaks into computer systems and programs – basically, a Star Wars mystification of a computer hacker) who survives by using his skills to con and steal from the wealthy patrons of the Canto Bight casino city.

Star Wars: DJ – Most Wanted follows DJ on one of his capers. The character uses his skills as a slicer to win a significant amount of money from a casino, seeding a computer virus in his casino chips, then losing a game resulting in the casino taking his chips into its system. Since the casino game is completely computer-generated, it becomes very easy for DJ to then control the game and give himself favourable odds.

Things get interesting when DJ is accosted by a couple of detectives. They consider DJ a person of interest after a notorious gangster named Denel Strench instigated a series of cons that kickstarted a gangwar among local mobs. All of the people who are known associates of Strench are already dead, save for DJ.

Further muddying things is DJ’s dangerous strategy of playing two rival casinos against each other, but being caught cheating by both. The title of the comic thus becomes clear: it is a battle of jurisdiction between the two casinos’ enforcers and the detectives. The plot is further complicated by some of the parties being found to have been bribed by Denel Strench into killing DJ.

With death coming in from multiple vectors, DJ’s only way of saving himself at this point was to cause a vehicular accident and get himself arrested and sent away from Canto Bight. While the casinos and the gangs may have jurisdictional advantage, they do not have extradition powers. Being jailed off-planet meant that DJ gets to keep his head. This is clever – a voluntary loss of freedom is a better outcome than otherwise certain death.

Along the way, the big mystery of the story is revealed: that Denel Strench could not be the mastermind behind the murders, because “Denel Strench” is a fake identity that DJ himself used and abandoned in the past.

The plot is fairly engaging up to this point. The writing is otherwise solid but we do note that the big twist – the identity behind this new “Denel Strench,” – is an anti-climax. The single issue is probably not enough runway to properly build up a personality behind the new Denel Strench, so that when the pages finally reveal who it is, it is a non-event. The story could have replaced Denel Strench with any other character that has appeared in the comic – one of the detectives, perhaps, so as to introduce irony into the story? Using a character from the front end of the story as the villain would have provided the issue with structural integrity. Perhaps it would have been better if the identity of this mysterious troublemaker was simply not revealed.

Star Wars: DJ – Most Wanted is nonetheless one of the better spin-off comic books from the Star Wars franchise presently on the market. In fact, we would go so far as to say that it is the Star Wars license that holds back the story. There is a good mystery involved here (we think there is a favourable comparison to be made to the film The Usual Suspects).

However, the title is made somewhat inaccessible and unrelatable by the unfamiliar settings, the franchise parameters of Star Wars, plus all of the mystifying jargon that a new reader must contend with. Some readers will enjoy this fan-orientated backdrop. Some will not, and be baffled.

Regardless, Star Wars: DJ – Most Wanted is a great take on one of the ancillary characters in Star Wars. There are fine stories to be drawn out of the franchise around characters who do not wield lightsabers.