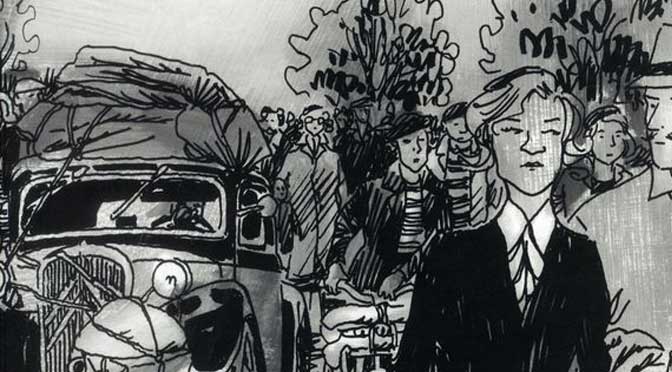 The story behind the story has been told many times, and it is nonetheless well-worth repeating. Two daughters, Denise and Elisabeth Epstein, improbably escaped the Holocaust in World War 2, assisted by a German officer who could not bring himself to convey the young girls to a horrible death in a gas chamber in Auschwitz. Carrying their mother’s red suitcase, the girl’s father told them not to open it,  as it contained their mother’s unfinished writing. (He, too, was sent to the gas chamber.) One surviving daughter finally succumbed to temptation in the late 1980s and opened the suitcase. She discovered that her mother, a popular 1930s French novelist named Irène Némirovsky, had written a tale about the invasion of France, weeks after it occurred. Before she could complete her story, Ms Némirovsky, a Ukrainian Jew by birth, was arrested by collaborating French police in accordance with the Vichy regime’s anti-Semitic policies, and also sent to Auschwitz, where she died of typhus before she could be gassed.  The writing is called “Suite Française”, and has two chapters, “Storm in June”, and “Dolce”. The other three planned chapters were never written.

The novel  “Suite Française” was a literary bombshell when first published in 2004. The novel has sold over a million copies, and in 2014 was the subject of a Hollywood English language motion picture. For readers of comics, we are spoiled that such a remarkable work has been, first, converted into comic book form by Emmanuel Moynot, and second, translated into English by David Homel.

‘Storm in June’ and ‘Dolce,’ the two existing volumes of Némirovsky’s projected five-volume Suite, are sections of what would have been a masterpiece. Set during and after the fall of France, this is a bleak and often harrowing satire, one that unmasks the pettiness and self-involved terrors of a privileged people confronted with the physical and ethical collapse of their way of life. But it is also, perhaps paradoxically, darkly funny, a book that, in cleaving to life’s tiny, quotidian details, captures the comic essence of experience” – Claire Messud, Bookforum

“The two novellas — which total about 400 pages — vividly and ironically describe the character of the French people under Nazi occupation with an almost casual brilliance. (…) The writing is accomplished, the plotting sure, and the fact that Némirovsky could write about events like the fall of Paris with such assurance and irony just weeks after they occurred is nothing short of astonishing.” – Yvonne Zipp, Christian Science Monitor

This comic is faithful the spirit of Némirovsky’s story, focuses on Book 1, entitled “Storm in June”. There are parallel narratives focussing on different groups of characters, all unrelated except that they are busy fleeing Paris as the German army marched towards it, and that they are all affluent or educated.

The entire civilian population of France is flotsam in tides that they cannot properly navigate. The currents of war sweep them backwards and forwards across the landscape. Initially, the flood of people, luggage, and vehicles leave Paris and make for the countryside and away from the German invaders. Towards the end of the comic, in events depicted after Marshal Petain has signed an armistice with the Germans and it becomes apparent to everyone that Paris will not be destroyed, the population wave creeps back to the capital to find it strangely unchanged, but half-deserted and dotted with German-language street signs.

In one startling scene, a thick cluster of civilians trudging or cycling along a country road out of Paris are indiscriminately strafed by a Luftwaffe Stuka. The people scatter, the unlucky few killed. The pilot only makes one pass, suggesting the murder was on a whim. The other refugees consider the dead lying in the fields. “Maybe there was a wealth of intelligence and love beneath their matted, lifeless hair.” The mob moves on.  But in another scene, an elderly French couple engage in an exchange with a cherubic German soldier on a bicycle. “Did they sign the armistice?” asks the old woman. “Don’t know. Let’s hope so,” says the soldier. “Guten tag.” The soldier cycles away. “He’s so young!…Just like a boyish blonde angel!” Nothing is straightforward. All of the characters are humans, flawed people, some good and some bad, nothing more and nothing less.

The various groups followed by the story are described as follows:

The superficial family squabbles, and the amusing frustration of the banking bureaucrats at not being able to dutifully take up their posts because of bombed rail lines, barely masks a caustic text. On one level, the author(s) assert that war demonstrates that in the quest for survival both rich and the poor can act in desperate and awful ways. But it is different from Joseph Conrad’s “Heart of Darkness”, because the road to moral purgatory is something from which the population can return. (Perhaps the flexibility is peculiarly French, a Gallic nonchalance to the stress of war and the need for survival.)

But there is something more fundamental than that in play. It is that people adapt, but in different, random ways. Unpredictable iterations of behaviour and events are foam on the fluid landscape. The swirling, random tide of people in war is a captivating picture of chaos theory.