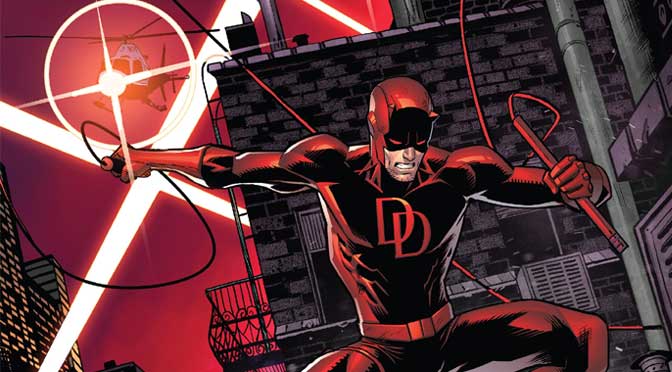 The understanding by US publishers is that new readers are reluctant to buy a comic with a high issue number, because of the sense that the reader needs to go back and purchase some if not all of the preceding issues to understand the comic book’s story. So, despite the intimidating issue number, and the fact that it is the second part of a new story arc titled “Mayor Fisk,” US comic book publisher Marvel Comics’ Daredevil #596 is a great starting point for new readers. The only requirement is a basic familiarity with the Daredevil franchise – the character is a blind superhero with otherwise enhanced senses, who fights gritty grim in New York. The popularity that the franchise has recently earned via the successful Netflix series means that many people who have never reader a comic book are aware of the character’s story. While the Netflix series is not part of the established continuity in the comics, it gives readers all the necessary background as to the enmity between Daredevil and his nemesis, the crimelord Wilson Fisk, who is known in the underground as the Kingpin.

The main problem faced by Daredevil in this issue is Wilson Fisk has won the election for mayorship of New York City (something which might surprise current mayor of New York, Bill de Blasio). A confrontation between Daredevil and Kingpin was featured in the previous issue. The essence of this perfectly explained by writer Charles Soule through various characters’ dialogue in this issue, which makes it easier for new readers to catch up. The confrontation is apparently a ploy by Kingpin, riling up Daredevil to the point where he broke some windows in the office out of frustration. This has been caught on camera and twisted so that it comes off as Daredevil physically attacking the mayor of New York City.

The majority of the story set out in Daredevil #596 deals with the fallout of the incident. It encapsulates Daredevil’s predicament: he is viewed by many residents of New York City as a hero. Now that he is accused of assaulting a public official, he is hunted down by law enforcement officers, many of whom admire him for his deeds and his abilities in combating criminals in dangerous parts of New York. But as seen in one of the pages, the men and women out to catch Daredevil value their responsibilities as police over their own personal feelings of respect and sympathy.

There is a lengthy, yet action-packed chase scene between Daredevil and a fictional department of the NYPD referred to as “PX,” which is trained and equipped to deal with superhumans like Daredevil. Mr Soule provides a great example of how to use the comic book medium effectively. The chase scene is rendered in as a single, unbroken sequence. Daredevil finds himself cornered multiple times, without the option to fight back as that would both harm police officers, and serve to make him even look worse in the eyes of the public. Help eventually comes by way of a Daredevil ancillary character named Blindspot, who wears an advanced suit that can turn invisible.

After the chase scene, Mr Soule wastes no time in starting another subplot. Daredevil sans costume is a pro bono lawyer named Matt Murdock. Murdock receives a call from the Kingpin, asking the blind lawyer to accept a position as his deputy mayor. The Kingpin’s plan is made obvious by his straightforward admission: his reputation is largely negative due to his deeds as a crimelord, but Murdock, on the other hand, has a sterling reputation as a champion of the common people. The Kingpin needs Murdock in order to improve his image as a government official. This offer is perhaps not surprising, given the villain’s Machiavellian tendencies. But the twist is that Murdock accepts the offer. (This is not quite new ground. DC Comics explored this in World’s Finest #255 (1979), when crime-fighting archer Green Arrow unsuccessfully ran for mayor of the fictional Star City – a concept later adopted and modified in the television show, Arrow.)

All in all, Daredevil #596 is a well-written issue that blends politics and action. We applaud too Mr Soule for not resorting to references and plot devices that would make an issue inaccessible to new readers, and unnecessarily reliant on extensive backreading.