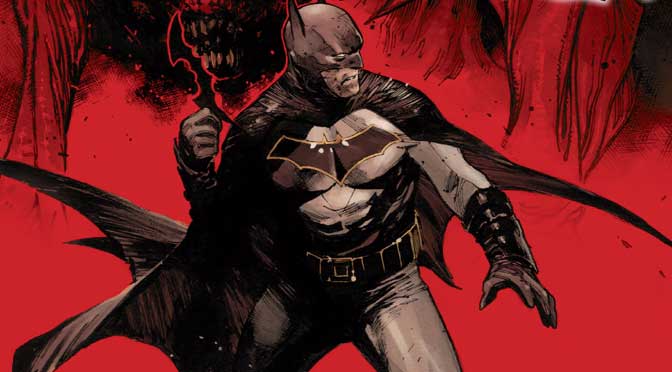 The overarching plot of the Dark Nights Metal event is buttressed by various single publication tie-in issues. These issues provide backstories for each of the alternate reality Batmen, as well as a glimpse of their specific abilities. While Batman has almost ordinarily been portrayed as lacking any superpowers, each of these corrupted Batmen have powers based upon, or even stolen from, other superheroes and villains within the continuity of DC Comics. Batman’s advantage is sheer raw, but very human intelligence. When Batman wins, it is because he has thought through to a solution, and is prepared (sometimes notoriously so). (In many respects, the story of Batman is a cautionary tale to students about exam readiness.) Here, a scene from Superman/Batman #12 (2004, written by Jeph Loeb), where Batman out-thinks the enormously powerful god Darkseid:

Batman tries and succeeds against the odds, a human overcoming formidable opposition. The limited parameters of Batman’s humanity is the appeal.

As expected of any crossover tie-in, especially published by DC Comics, Batman: Lost requires the reader to have familiarity with the Batman’s lengthy history, as well as the events surrounding the Dark Nights Metal event. This is an endemic problem for DC’s super hero titles, that knowing the lore is the key to understanding the story. The vast majority of DC Comics’ titles are consequentially inaccessible to new readers. In this review, we assume that anyone who might purchase this comic knows the lore.

Batman: Lost begins with an interesting, somewhat psychedelic premise: the character’s alter ego, Bruce Wayne, is lost within a dark multiverse, and is experiencing various realities and timelines in a dreamlike state.

A scene in which an elderly Bruce Wayne (with a moustache, like the Bruce Wayne of Frank Miller’s 1987 epic, Dark Knight Returns) tells stories to his granddaughter frames the narrative. As cleverly noted by BleedingCool, this is a homage to writer Grant Morrison’s work on Animal-Man, where the title character is able to see the reader:

It is a nuanced and layered scene. At one point Bruce asks his granddaughter to pick a memento, promising to tell the story behind it. The two ruminate upon the volume of stories Bruce tells, and Bruce notes that while all of them are true, many of them contradict each other. DC Comics’ continuity narrative sets in a multiverse, where events is malleable and constantly changing. But this comment by the character is also a nod, by reasons of its duration of eighty years, with changes in styles and fashions of writing and in what appeals to the readership, as to how the Batman’s lengthy history is full of contradictions. The story again evokes the work of Grant Morrison, who wrote Batman stories a decade ago, on the premise that each of Batman’s adventures throughout the character’s decades-long history occurred within the character’s continuity.

There is very little meat on the bone of the stories which the elderly Bruce tells, but it is not the point. The reader only gets glimpses of scenes that play out of order. The stories are used as a way of revealing the story of the villain of Dark Night Metal: the demon named Barbatos, who claims to have had a hand in the creation of the Batman mythos throughout the ages.

Again, most of the details will be lost on readers who lack encyclopedic knowledge of DC Comics’ convoluted publisher-wide continuity, as it pulls in details from past storylines from the innumerable Batman comics (yes, including that one time when he went back in time and became a caveman). But the story it is building is intriguing enough such that it might convince readers to research those aspects which are not immediately obvious.

The only warning we have is that the premise of the Batman concept being shaped by the hands of an omnipotent entity throughout the ages has the knock-on effect of mitigating the novelty of the character as a champion of sheer human potential. Fans who like the Batman character’s more grounded approach to superheroics may feel the concept cheapened, and moved too far away from the appeal of Batman’s sheer cunning, as we have described above. Batman here reminds us of the title character in Mike Carey’s Lucifer (Vertigo Comics, 2000-2006), where in one story arc Lucifer stands at a supernatural place called the Aleph, where he can see all things occurring in the universe from the one vantage point. Batman:Lost is not the story of a costumed detective solving crimes, nor of even the Machiavellian hero outthinking supervillains.

Batman: Lost is however a respectable supplement to the Dark Nights Metal crossover event, with an interesting push upon, if not breaking of, the fourth wall.