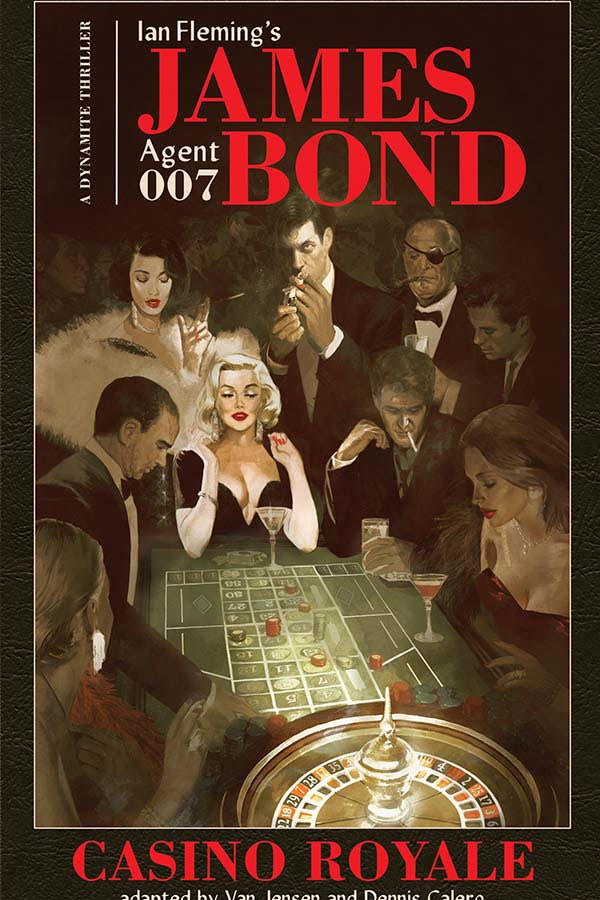 So many of our reviews of espionage comics are of Dynamite Entertainment’s James Bond adaptions. Here is another one, this time a faithful adaption of Ian Fleming’s very first James Bond novel, Casino Royale.

The writer, Van Jensen, is more of a director, or a curator, in the execution of the adaption. It is Mr Fleming’s words, taken directly from the original novel, which we read. As a consequence, we think, this comic is not really an adaption. The very high degree of fidelity in the text renders the comic with an immediacy in respect of Mr Fleming’s characterisation. Bond in particular is clearly not just an unpleasant person – a bludgeon rather than an assassin, killing for Queen and Country.

Bond is also not especially good at his job:

1. Save for the bail-out by the CIA agent Felix Leiter, Bond would not have been able to pressure the antagonist of the story, Le Chiffre, the vile brothel owner and “one of the Opposition’s chief agents in France and undercover paymaster of the Communist-controlled trade union in the heavy and transport industries in Alsace”. Bond laments the loss of money but seems resigned to his fate – there is no sense of relentlessness in respect of the conclusion of his mission.

2. When Le Chiffre kidnaps Bond’s love interest Vesper Lynd, Bond goes roaring after Le Chiffre’s car in a vintage racer, only to lose control and crash. Bond is impetuous and reckless and he fouls up the mission with his stupidity.

3. This auto-crash enables Le Chiffre to capture Bond and torture him. Bond is manifestly helpless. Only the happenstance of the intervention by a nameless, and in contrast, very competent SMERSH agent from Soviet Russia, and who kills Le Chiffre, saves Bond. Bond suffers the humiliation of being saved by his ultimate opponent. The SMERSH agent does not kill Bond because he had no orders to kill foreign spies – he is disciplined in a way Bond is not. Even so, he tags Bond with a knife, cutting the Cyrillic letter for “sp” into Bond’s hand to warn other Russians that Bond is a spy. The sense of the Soviet agent’s utter control over the situation is in direct contrast to Bond’s ineptitude.

4. Bond does not recognise that Lynd is a double agent. Instead, he falls in love with her and openly contemplates quitting his job to be with her. Bond cannot identify an opponent even when she is sharing his bed. “The little shadows and question-marks – which his instinct had noticed but his mind rejected – all stood out now like signposts”, Bond realises, far too late, after the revelation of his betrayal by Lynd in her suicide note.

5. The only thing Bond is good at is counting the odds. Improvisation is his skill set. This is extremely well depicted in the comic: Bond calculated the odds, for example, of the stranger who has approached him being a CIA agent, with the percentage rising with every exchange. But in other words, Bond relies upon getting lucky. There’s no sense of a real strategy.

The James Bond motion pictures portray Bond as a super-spy- infallibly adaptable and loaded up with high tech gadgets. There is no sense of that within Mr Fleming’s novels, and certainly no sense of it within this comic. Bond is instead revealed as falling in love far too quickly, with a shallow emotional depth, and remarkably incapable of adapting to the fog of war as it swirls around him and almost consumes him.

In a comic entitled The League of Extraordinary Gentlemen: The Black Dossier, writer Alan Moore offers his own caustic assessment of Bond, through the mouth of the spymaster, M, as an over-rated buffoon. Casino Royale underscores this conclusion. Mr Jensen quite properly does nothing to interfere in that. Mr Fleming himself seems to speak through the sardonic French agent, Mathis, mocking Bond for his sentimentality and weakness.

The masterful aspect of the comic is that it is clearly set in the 1950s. The dialogue rings true. There is a post-war “can-do” approach, navigating by only the loosest of plans towards the achievement of the goal, an attitude necessary in the chaos of World War Two and overflows into the early Cold War. “Bond was used to unique control and rather liked it,” notes Mr Fleming in an internal monologue. There are no Bluetooth ear pieces, no GPS geolocation, no other methods of control which we take for granted in contemporary spy stories.

The misogyny is stark. “And then there was this pest of a girl. Women were for recreation. On a job, they got in the way and fogged things up with sex and hurt feelings and all the emotional baggage they carried around. One had to look out for them and take care of them.” Bond concludes this inner observation by saying the word “Bitch” out loud, describing a woman who at that stage Bond has never met.

And everyone smokes – Bond smokes what now to most people is an astonishing number of cigarettes a day and he catalogues the number as he proceeds. “Cigarette number 70 today.”

The idea of bankrupting Le Chiffre through gambling in order to turn him is pure 1950s: unless the casino was entirely rigged, no intelligence agency in the 2010s would ever do something so rash with taxpayers money (you would hope). Le Chiffre would be much more likely to be kidnapped and subject to extraordinary rendition nowadays.

The novel was a product of its time: this comic book does a superb job of perpetuating a sense of a Cold War that is new to everyone: the hope arising from the new world order intermingled with the weariness of a grim fight with a brutal former ally, the Soviets. We thoroughly enjoyed this comic.

The Secret Lives of Dead Men: Brubaker’s Velvet, the James Bond mythos, and the Spectre of Ian Fleming