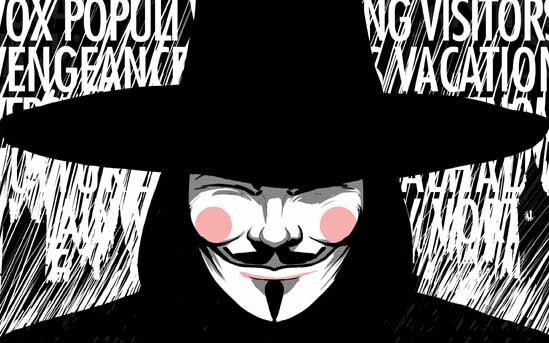 “Remember, remember the fifth of November of gunpowder treason and plot. I know of no reason why the gun powder treason should ever be forgot.”

Ostensibly, V for Vendetta is a science fiction story. It is set in a fictional England, where a far right government with the party name Norsefire have slowly eliminated ethnic minorities, homosexuals, and leftists from their communities and established a police state. Writer Alan Moore, as demonstrated in his forward to the story, was very much motivated by his reaction to the right wing politics and adjunct economic policies of the government of Prime Minister Margaret Thatcher.

Re-reading the collected work, and writing this note is a cause for mixed nostalgia, because the text is so firmly set in the 1980s. Your critic, to be glib, remembers that the 1980s were mostly fun, setting aside AIDS, the Cold War, and the 1979 Soviet invasion of Afghanistan.

But the young Mr Moore was beside himself with fury. The economics of Thatcherism had set England against itself. It punished the poor, and set hundreds of thousands out of work. Outside of economics, Margaret Thatcher had caused a major war against Argentina in the Falkland Islands in what suspiciously looked like an effort to get re-elected. She also ensured the survival of Great Britain’s Trident nuclear weapons program. The biggest threat to England was not the threat of Soviet Union, Mr Moore asserted. It was the government’s cold, dead response to both external threats and internal economic malaise. Smashing unions, further taxing those who had to collectively huddle together in housing, and wrecking the mining sector was a form of economic rationalism delivered with brutal shock.

“Anarchy wears two faces, both Creator and Destroyer. Thus Destroyers topple empires; make a canvas of clean rubble where creators can then build a better world. Rubble, once achieved makes further ruins’ means irrelevant. Away with our explosives, then! Away with our Destroyers! They have no place within our better world. But let us raise a toast to all our bombers, all our bastards, most unlovely and most unforgivable, let’s drink their health, then meet with them no more.”

Anarchy as an ideological basis for resistance has fallen into the shadows these days, with Islamist radicalisation and terrorism being the preoccupation of the global community. But anarchy as a political movement has a solid history particular in the 19th and early 20th centuries. The assassination of the youthful and charming Grand Duke Franz Ferdinand of Austria and his wife in 1914, triggering World War One, was by a Serbian anarchist. Anarchists were zealously committed to the removal of monarchies as the ruling class, usually by bombs or concealed pistols. In the 1970s-1980s, the deep vein of English anarchic ideology can be clearly seen in the Sex Pistols’ enormously successful and controversial 1976 song, Anarchy in the UK. It plainly tapped into the zeitgeist. So did V for Vendetta.

The central character in his Guy Fawkes mask and a period hat, known only as V, carries the best lines, and as illustrated above, many of those are to do with anarchy. In that regard, the monologues from the mad protagonist are positively Shakespearean.

“Our integrity sells for so little, but it is all we really have. It is the very last inch of us. But within that inch, we are free.”

Mr Moore has an ear for dialogue and wit, and within his enormous body of work that skill is most clear in V for Vendetta. The sheer delight of V’s clever lilt, as he hangs off the statue of Justice and admonishes her, because he can, is in contrast with the dour, disturbingly neutral news reporting of the Voice, one of the organs of government:

“Good evening, London. It’s nine o’clock and this is The Voice of Fate…. It is the Fifth of the Eleventh, Nineteen-Ninety-Seven….

The People of London are advised that the Brixton and Streatham areas are quarantine zones as of today. It is suggested that these areas be avoided for reasons of health and safety….

Police raided seventeen homes in the Birmingham area early this morning, uncovering what is believed to be a major terrorist ring. Twenty people, eight of them woman, are currently in detention awaiting trial.

Have a pleasant evening”

Indeed, the absence of specific information is perhaps the most dreadful aspect of that monologue. (Why would two substantial parts of London be suddenly quarantined?) And we are then wished a mundane pleasant evening, told to be happy in the dark. Mr Moore adroitly renders sinister a bland news report.

The Mouth with its Voice, a propaganda ministry, is only one aspect of the Norsefire government. The Nose is the inquisitorial branch. The Hand is for enforcement, and their agents are called Fingermen. These undercover policemen are above the law. A group of them encounter the female lead to the story, Evey Hammond, in a naive effort at prostitution, and are intent on gang-raping and killing her until she is saved by V. Mr Moore’s 1997 post-nuclear war London is a vicious society.

V’s relationship with Evey is hard to describe. The moment of catharsis for Evey is when V captures her, makes her believe she is in a cell, and exposes her to the same emotional purgatorial fire as V himself experienced when imprisoned. V wishes to catalyse a Nietzschean will to power in Evey. One of the crowbars to that result is the impassioned letter on toilet paper from the dead actress Valerie Page, imprisoned as a lesbian, which she ends by asserting her love for the stranger reading the letter as a love of life, is heart-breakingly written. Evey is given the choice: collaboration or death. She chooses death, and thus in V’s assessment, transcends.

“Happiness is the most insidious prison of all.”

But the plot limb by which we get there, the abduction and torture of a young woman, is beyond questionable. V is clearly up until that time as the hero of the story. In reality, he is insane, and his methods are no better than those of the Fingermen. Is Mr Moore deliberately flawing his character so as to make him something other than a hero? Or does he echo what is happening to England under Thatcher – the transition to awareness requires trauma?

V for Vendetta has been enormously influential in popular culture. It was made into a very good motion picture in 2005. Perhaps its most obvious manifestation is in the very wide spread use of V’s Guy Fawkes mask by protestors and opponents of globalisation, including the counter-state hacking cooperative, Anonymous. But it is not the mask which gives this work its currency. When we read news reports about terrorist rings being smashed by police, where the details are hidden because of national security reasons, we are reminded that even thirty years later, V for Vendetta remains entirely relevant.